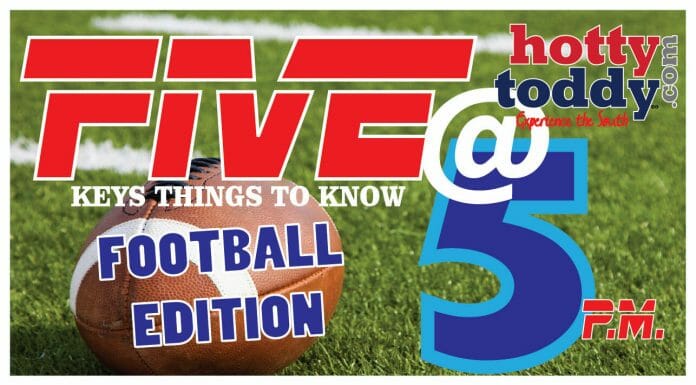 EDITOR’S NOTE: Beginning this week and counting down to the first week of Ole Miss football practice the week of August 15, HottyToddy.com’s own Collin Brister, former sports editor of the Daily Mississippian, will bring you exclusive “5 at 5” analyses of either A) the opponents Ole Miss will be facing this season or B) some background on Ole Miss’ players at each position. It’s being called “5 at 5” because each original piece will give you 5 key things to know, and we will post these stories at 5 pm every Monday-Friday.

2015 Season: In totality, Florida State’s 2015 season would probably be considered unsuccessful by those in Seminole country. Florida State went 10-3, sure, but the 10 wins came against less than stellar competition. The Seminoles’ best win came against Florida, the last game of the year. Florida was playing Treon Harris at quarterback, so I’m not sure that counts. When the ‘Noles faced stiff competition (Houston, Clemson) they weren’t extremely competitive. Florida State also lost to Georgia Tech during the 2015 season off a last-second blocked field goal that Tech returned for a touchdown as time expired.

Offensive analysis: Who is Florida State starting at quarterback? That will tell you all you need to know about their offense. Their options include senior Sean McGuire and true freshman Malik Henry. McGuire took over for Everett Golson halfway through the Seminoles’ 2015 season as the starter and completed 59 percent of his passes while throwing 11 touchdowns to six interceptions. McGuire only averaged 8.04 yards per attempt, meaning he is likely conservative with the football. Henry was an early-enrollee for the Seminoles and went through spring practice in Tallahassee. While talented, it’s extremely rare that a true freshman quarterback starts the first game of the season, especially with it being against a talented Ole Miss defense.
Whoever is FSU’s quarterback he will have one thing going for him, and that’s the fact that Dalvin Cook is going to be lining up behind him. Cook, the 6’, 200pound junior running back rushed for 1691 yards in the 2015 season, averaging 7.4 yards per carry. Cook also scored 19 touchdowns. The likely first-round NFL draft running back will be a key component of the Seminoles offense against Ole Miss on September 5th.

Defensive Analysis: While Florida State will have to replace first-round draft pick, Jalen Ramsey, they’ll return a lot of starting experience. The Seminoles return Derrick Nnadi who started 13 games last year, acquiring 45 tackles on the interior of the defensive line. Florida State will also return Josh Sweat and DeMarcus Walker. Walker totaled 10.5 sacks and 15.5 TFLs during the 2015 season.
Florida State lost both linebackers from the 2015 season in Reggie Northup and Terrance Smith. They’ll look to replace them with Ro’Derrick Hoskins, who started four games last year and garnered 6.5 TFLs.

Special Teams: Robert Aguayo isn’t walking through the door for Florida State anymore, but his younger brother Ricky is. The elder Aguayo was near perfect for the Seminoles in his three years as the starting kicker. He was perfect in the 2015 season inside of 40 yards, while hitting a long of 51 yards. His younger brother, a redshirt freshman, will have huge shoes to fill.
Punting-wise, the Seminoles will have to replace Carson Beatty who averaged 45.2 yards per punt and downed 21 of his 61 punts inside the 20-yard line. Jonathan Hernandez punted one time last year for 37 yards, so he or Ricky Aguayo could be candidates to replace Beatty.

Outlook and Prediction: Don’t kid yourself. Florida State is just as talented as many of the higher-ranking teams in the Southeastern Conference. Florida State beat the best the SEC had to offer in Auburn in 2013 on their way to a national title. Florida State continually recruits in the top five in the country, so their conference affiliation has no bearing. The reality is they’re a talented, talented group with a Heisman-frontrunner in their backfield in Dalvin Cook.
It will be interesting to see how Ole Miss handles Florida State’s defensive line. The Rebels will likely be breaking in true freshman Greg Little at left tackle, and while he’s extremely gifted he’s not Laremy Tunsil, yet. Ole Miss will need to run the football, as is always the case, to have success in Orlando come September 5th to keep the ‘Noles from pinning their ears back and ambushing Little in predictable passing scenarios.

With all that being said, Chad Kelly plays for Ole Miss. Chad Kelly is one of, if not the, best quarterbacks in the nation. Florida State doesn’t have a proven commodity at the quarterback position, while Ole Miss does. At the most important position on the field, Ole Miss has a talented, proven and elite option. For that reason alone, give me the Rebels.