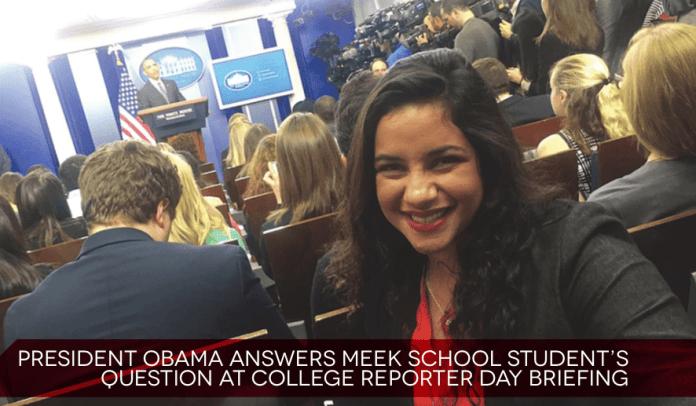 When Juan Oropeza came to the United States as an undocumented immigrant 25 years ago, he couldn’t have imagined that his daughter would one day ask the president about immigration policies. But that’s what happened in the White House Briefing Room on April 28 when Daniella Oropeza, a junior in the Meek School of Journalism and New Media, raised her hand and was called on by President Barack Obama.

“We weren’t supposed to meet the president, so I was shocked he came into the room and shocked that he called on me,” Oropeza said. She was chosen as one of 50 college journalism students to participate in the first White House College Reporter Day.

Obama answered a few questions from students, and then called on “the young lady right there in red.” When Oropeza began her question, her first words were, “Hey, I’m Daniella,” which prompted Obama to teasingly interrupt by saying, “Hey.” He gave a lengthy answer to her question about whether his administration will make any further changes in its Mexican immigration policy.

Oropeza’s question got attention. Immediately after the press conference with the president, Oropeza was interviewed by CBS News. She then received emails from Univision and Telemundo, the two Spanish-language networks, asking her for interviews, which she conducted in Spanish and English.

“It was very exciting. I didn’t expect to see President Obama and I didn’t expect what came after with the interviews,” Oropeza said. “It was the experience of a lifetime.”

Oropeza, of Clinton, Mississippi, had a summer internship in 2015 at WAPT-TV in Jackson. She was a correspondent during the spring 2016 semester for “NewsWatch,” the Student Media Center’s student-run daily, live newscast. She worked last summer as a sales and marketing intern at WTAE-TV in Pittsburgh.

Oropeza traveled to Washington with her mother and grandmother. They drove 14 hours from Mississippi to the nation’s capital, and stayed for two days. On their way back to Oxford, they stopped for lunch at a Mexican restaurant in a small town in Georgia. While paying for their food, the waiter asked: “I’m sorry, but I just have to ask, were you on the news a couple of days ago?”

“I was speechless,” Oropeza said, “but my grandmother was quick to say, ‘Why yes, she was!’ After paying our check, our waiter came back with his phone in hand and showed us a clip of my question to the president from the White House account on YouTube. That lunch still feels like a dream.”

White House College Reporter Day was designed as an opportunity for student journalists to talk to senior administration officials about issues as varied as sexual assaults on campus and student loans. Students were selected based on applications they submitted, and they had a full day of events and briefings at the White House, including sessions with Press Secretary Josh Earnest, the White House press corps, White House Chief of Staff Denis McDonough, Senior Advisor Valerie Jarrett and Secretary of Education John B. King Jr.

Near the end of the day, Obama walked in, saying, “I hear there’s some hotshot journalists here.” USA Today reported that you could hear “audible gasps and freak-outs from the unsuspecting students.”

At 3:28 p.m. that day, Oropeza tweeted: “When your Mom is so excited that you spoke with the POTUS that she can’t even type.”

The Meek School Magazine is a collaborative effort of journalism and Integrated Marketing Communications students with the faculty of Meek School of Journalism and New Media. Every week, for the next few weeks, HottyToddy.com will feature an article from Meek Magazine, Issue 4 (2016-2017).