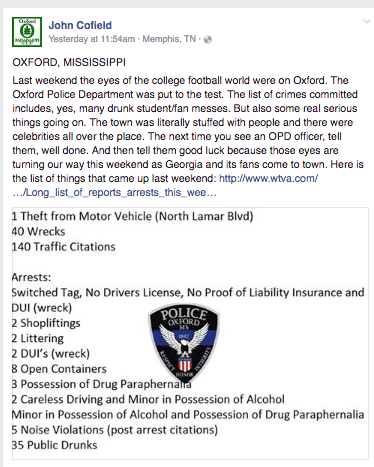 Once the clock hit all zeros on the score board Saturday at the Vaught as Alabama defeated Ole Miss by the score of 48 to 43, the protectors of this great city went to work.

Oxford Police Department was put to the test. After a huge game ends, most people would think drinking and fighting would play a huge role in what went on after the game.

Yes, that took place, but that was only some of the things that our men and women in blue had to be called out to take care of this past weekend.

On Saturday, Oxford will once again be jammed packed with fans coming into watch the Rebels take on the Georgia Bulldogs in a SEC showdown. If you happen to be out and about this weekend and see a member of the Oxford Police Department be sure to extend your appreciation for what they do for our community.