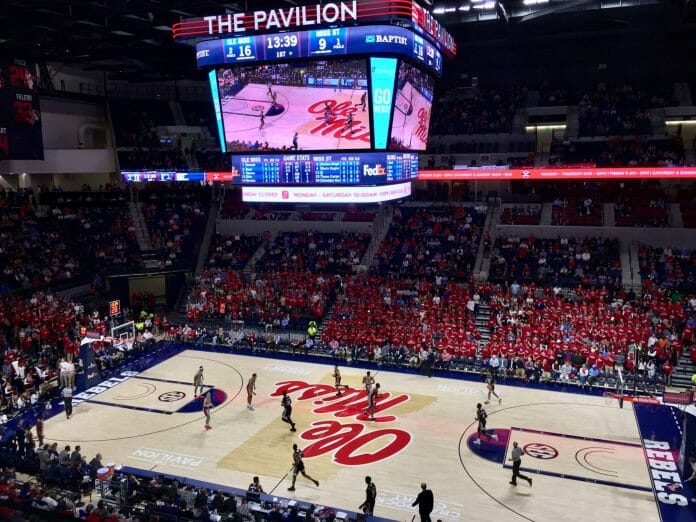 Some Mississippians may consider this to be the real Egg Bowl. The Ole Miss Men’s Basketball team outlasted the Mississippi State Bulldogs 88-61 on Tuesday night.

Sophomore guard Terence Davis led the Rebels with 18 points followed by Sebastian Saiz with 17 points. Davis shot for 7 of 13 from the field with five rebounds while Saiz contributed 11 boards for the Rebels. Saiz posted his 15th double-double of the season.
The Bulldogs were led by Lamar Peters and Quinndary Weatherspoon with 16 points each. However, Peters was taken out midway through the second half due to a hip injury. The Bulldogs suffered as their backup point guard, I. J. Ready, was also lost to injury.
The Rebels dominated the Bulldogs on points off of turnovers (23-5) and second-chance points(22-5). Ole Miss also had the upper hand on offensive rebounds with 15 compared to the Bulldogs’ five. Mississippi State played a close game with about seven minutes to go in the first half until Rasheed Brooks sparked the Rebels 22-5 run to take a 51-33 lead at halftime.
Ole Miss junior Justas Furmanavicius tallied up one of his most productive games of the season with six points, 10 rebounds, one assist and two steals. Furmanavicius played a vital role in the Rebels victory.
Ole Miss takes on Vanderbilt in Nashville this Saturday at 2 p.m. The game can be seen on ESPNU.

By Wes Cooper, an intern for HottyToddy.com and a student of the Meek School of Journalism and New Media. He can be reached at jwcooper@go.olemiss.edu.
For questions or comments, email hottytoddynews@gmail.com.