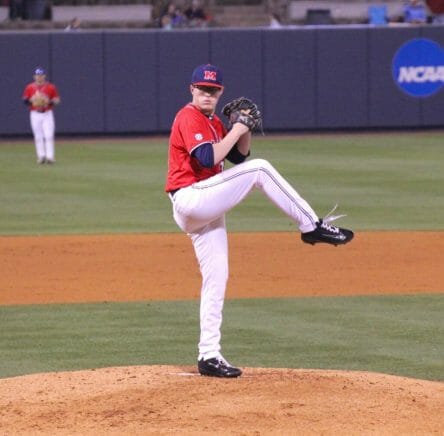 After losing five of their last six headed into a weekend series with Furman, Ole Miss needed a sweep in the worst possible way, and they delivered. While the Rebel bats continue to search for consistency, the entire pitching staff delivered a masterful performance. Not one Furman runner crossed the plate all weekend long, an achievement not seen since a series with Nicholls in March of 2004.
Friday

After taking his first loss of the season against Texas Tech in Houston, David Parkinson pitched a gem against Furman on Friday night. The lefty took a no-hitter into the 7th inning and struck out nine batters on his way to his third win of the season. Parkinson’s dominance on the mound gave the bullpen the night off with the exception of closer Will Stokes. Stokes made quick work of the Paladins and picked up his fourth save of the year.
The Rebels’ struggles at the plate have been a concern as of late, and while they didn’t hit the cover off the ball this weekend, they made improvements. While they scored just two runs, the Rebels totaled six hits on their way to a 2-0 victory. Sometimes a turnaround can start with one player, and Ryan Olenek led the way on Friday. The sophomore centerfielder went 3-4 with a double and an RBI. Tate Blackman drove in the other Rebel run in his return from the midweek suspension.
Following the news earlier this week of being named to the Johnny Bench Watchlist, freshman Cooper Johnson continued to remind teams not to test his arm. Johnson spoiled a hit-and-run attempt by Furman in the 4th inning. This was the sixth runner of the season thrown out by Johnson. 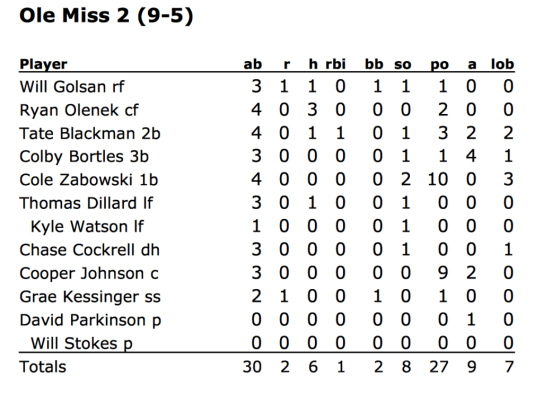 After an injury caused James McArhtur to miss his start, Brady Feigl stepped onto the mound on Saturday. Not to be outdone by Parkinson, Feigl went 8 innings, struck out 10 and allowed no runs in the longest outing of his career. For the second straight day, the only man out of the bullpen was Stokes who closed the game out, although he wasn’t in line for a save with the Rebels 5-run lead.
Feigl had something on Saturday that Rebel pitchers have been searching for as of late, early run support. In his second start this season, Michael Fitzsimmons stepped to the plate in the bottom of the second inning. Up 3-1 in the count, Fitzsimmons got the fastball he was looking for and drove it to left field. The home run put the Rebels on top 2-0. The Rebels continued to build their lead in the 3rd, as a double steal caused confusion for Furman and Olenek scored from third. Later in the inning, Fitzsimmons delivered again with a hard grounder through the legs of the third baseman.
The Rebels added an insurance run by way of a Blackman sac fly in the 8th inning, but with Feigl cursing, the Rebels were already on their way to a series-clinching victory. 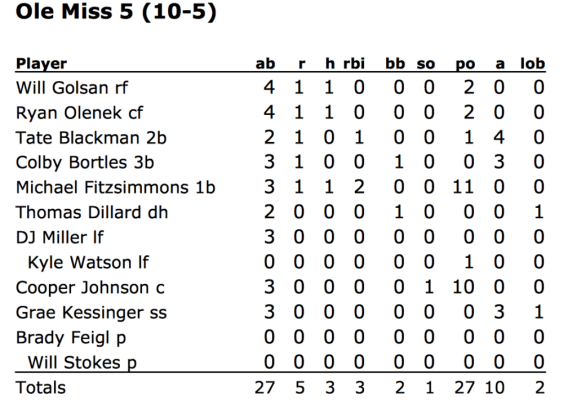 With uncertainty over who the Sunday starter would be, freshman Greer Holston took the mound for the Rebels. Holston’s first career start came against Memphis earlier in the year, a start in which he gave up four runs in four innings. In his defense, he had little help behind him, as the Rebels committed four errors in the losing effort. This time around, Holston did his job, and the defense did theirs. Holston was sharp, going seven innings and allowing just two hits. While he allowed no runs, he left the game without a decision.
The Rebel bats were unable to give their pitcher any support through the first seven frames. While Ole Miss was able to tally up nine hits, they were unable to get them to the plate. No one in the lineup had more than one hit, so it was promising to see consistency throughout the lineup. The 0-0 tie was finally broken in the 8th inning by Saturday’s star Fitzsimmons. The sophomore delivered a pinch-hit single to score Will Golsan from second, who was moving before the pitch on a hit-and-run.
With a tight game on the line, Coach Bianco turned the ball over to his bullpen. Andy Pagnozzi became the first reliever other than Stokes to emerge from the left field bullpen all weekend long. Pagnozzi efficiently stuck out the side, and the Rebels needed just three more outs to complete their third sweep of the season. With Stokes having gotten work in the first two games of the series, Dallas Woolfolk was brought in to close the game out. The Paladins put two men on in the 9th, but Woolfolk was able to get out of the jam, and the Rebels won by a narrow 1-0 margin. 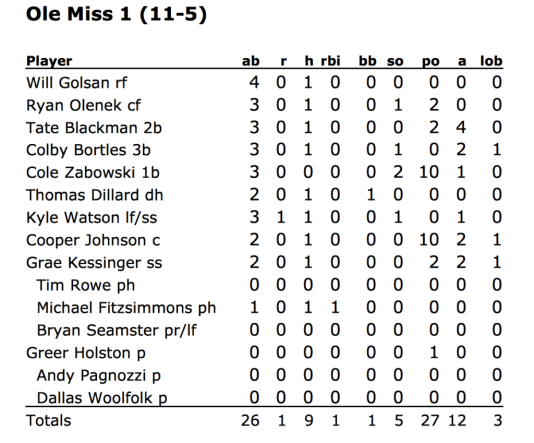 Takeaway
The pitching performances by the Rebel staff will overshadow the fact that the Rebel bats have still yet to come back to life. Just a few weeks ago, several Rebels were hitting over .400, and while that obviously wasn’t going to last, you’d expect it to settle above .300 for a little while longer. Currently, no Rebel is hitting above .300 other than Fitzsimmons with just 11 at-bats. The pitching staff is talented, but they can’t throw shutouts every game. SEC play begins this weekend when Vanderbilt comes to town, and if the Rebels can’t hit, I wouldn’t expect to come away with a series win. Before the series with the Commodores, the Rebels will travel to Biloxi to take on Nicholls State on Tuesday.