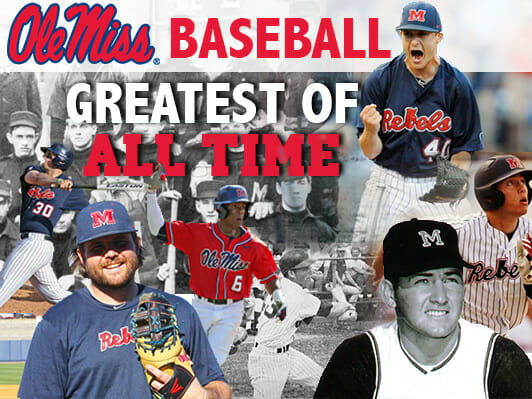 Since 1893, players have come and gone from the Ole Miss Baseball program. There have been many notable names to don the red and blue, but only a select few have left legacies that have stood out among the rest.
In discussions of who the greatest Rebels of all time may be the questions of old vs. young, consistency vs. clutch performances and so on will arise. With a decorated history to pull from, four HottyToddy.com writers have set out to determine the best player in Ole Miss history at each position.
Over the next three weeks, articles will be released with their picks for the greatest infielders, outfielders and pitchers and catchers in Rebel history. As we go, we encourage you to follow along, debate and come up with your G.O.A.T lineup. 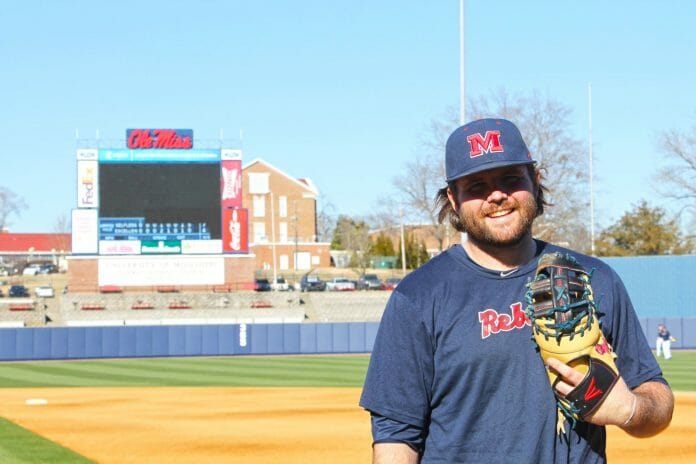 Cole Crenshaw: Matt Smith
This was a tough one, but after watching Matt Smith destroy the baseball for three straight years, I had to go with the big right-hander. In three years as a starter, Smith blasted 34 home runs while holding a .322 career average. The moment never seemed to be too big for Smith, and fans got spoiled watching him hit walk-off after walk-off in Oxford.
Steven Gagliano: Sikes Orvis
The mustache alone may have gotten him on this list, but his play on the field certainly didn’t hurt. He may not have hit for average but he was able to provide a power threat in the Rebel lineup during his time in Oxford. In his final year with the Rebels, Orvis led the team with 14 home runs and drove in 53 runs while finishing with a .540 slugging percentage. He saved his best for when it mattered the most as he hit .305 during the NCAA tournament including a home run against ULL to send the Rebels to Omaha.
Nick Bushart: Stephen Head
Earning accolades such as National and SEC Freshman of the Year, All-American for three years and Co-SEC Player of the Year, make Head a prime candidate to be somewhere in the ‘greatest of all time’ list. He excelled at multiple positions throughout his career as a Rebel, but the reason I am making him my G.O.A.T. first baseman is because of his ability to hit. He is top 10 all time in RBIs (165) and in HRs (37) for the Rebels. He batted over .300 in his career making him one of the best hitters of all time with the Rebels.

Adam Brown: Stephen Head
One of the greatest baseball players to step on the diamond of Swayze Field would have to be Stephen Head. Head was a very talented first baseman for the Rebels and a dominating Southpaw pitcher. He became the first three-time All-American in the Ole Miss Program history before being drafted by the Cleveland Indians in 2005. While on campus the Rebels advanced to three straight NCAA Regionals and the first Super Regional appearance in 2005.


Cole: Alex Yarbrough
Yarbs was a three-year starter under Coach Mike Bianco, and he got better every single year. After earning 2nd Team All-SEC honors as a sophomore, he broke out in his junior campaign by unanimously being selected as a 1st Team All-American. Yarbrough was an excellent switch hitter, hitting .380 his junior year, while also being an incredible fielder, as he only committed three errors that year.
Steven: Alex Yarbrough
While Yarbrough’s consistency at the plate was an added bonus, his reliability in the field was even better. In 2012 Yarbrough posted a .989 fielding average, committing just three errors throughout the entire season. Yarbrough’s .350 and .380 batting averages led the team in 2011 and 2012 respectively. Yarbrough’s performances earned All-SEC honors in 2011 and 2012. Yarbrough was named first-team All-American by Baseball America and numerous others in 2012. Yarbrough was a model of consistency in the field and at the plate, which earned him a spot on this list.
Nick: Brad Henderson
Brad Henderson is overshadowed by Yarbs as the greatest to ever play the position; however, the statistics point straight to Henderson. Henderson was a four-year player at Ole Miss and his last year he was honorable mention All-American. He is top ten in ole miss record books in hits, doubles, home runs, RBIs, and runs scored. He was also the first ever Rebel to have 100 hits in a single season with 101 in 1999.
Adam: Alex Yarbrough
At second base a name that made a lot of plays on the right side of the infield would be Alex Yarbrough who in 2012 was named first team All-American, first team All-SEC selection and a semifinalist for the Golden Spikes award in 2012. Yarbrough was drafted by Los Angeles Angels of Anaheim.  In 2012 he had a 22 game long hit streak which was the fourth longest in school history and third longest in a single season. 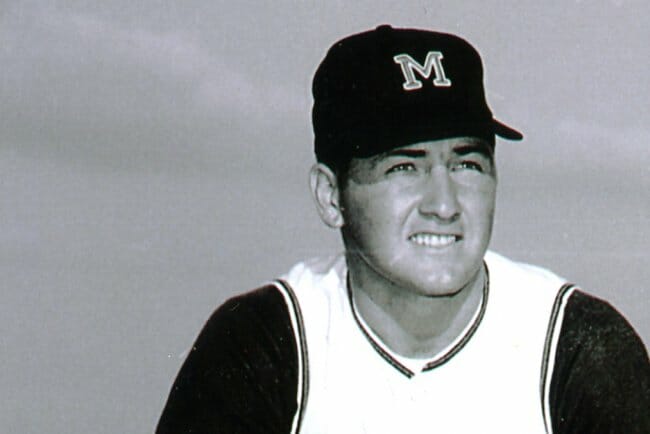 Cole: Jake Gibbs
Simply put, it’s hard to make an Ole Miss baseball list and not include the great Jake Gibbs. Gibbs led Ole Miss to their first ever SEC championship in 1959, and he was also named a First Team All-American in 1960.
Steven: Jake Gibbs
The Grenada, MS native became an All-American at Ole Miss and helped lead the Rebels to the SEC championship in 1959. In three seasons with the Rebels, Gibbs hit .388, .424, and .333  and is currently third all-time with a .384 career average. Gibbs was a 2-sport athlete at Ole Miss, who as a QB led the Rebels to a 10-0-1 record and a national championship in 1960. Gibbs was drafted by the New York Yankees, where he played from 1962-1971. Gibbs came back Ole Miss as a manager from 1972-1990 and led Ole Miss to a CWS in 1972. Gibbs’ no. 41 was the first to be retired in Ole Miss baseball history.
Nick: Chris Coghlan
Chris Coghlan played three years for the Rebels and started all of those years at 3B. He made the All-Freshmen team his first year and his final year he was a third team All-American. He batted .338 all time for the Rebels and is in the top 20 for hits. He led a team to the Super Regionals in 2005.
Adam: Jake Gibbs
Among the greatest to play at Swayze you can’t go without talking about Jake Gibbs who is one of the best at third base. Gibbs lettered all three seasons in a Rebel uniform. Before being drafted by the New York Yankees Gibbs finished with a .348 batting average eight home runs with 24 doubles and five triples.


Cole: Errol Robinson
Considering Rebel greats Don Kessinger and Zach Cozart were options, this was a hard decision to make. Although Robinson was inconsistent at the plate, and even sometimes in the field, you could never question the heart of this man. Robinson proved to be a leader from his very first game, as he started virtually every game his freshman year and helped lead the Rebels to their first trip to Omaha in over 40 years. That is the only stat I need to hear.
Steven: Don Kessinger
A name that will sound familiar to recent Rebel fans. Grae Kessinger’s grandfather was a great Rebel shortstop at Ole Miss and in Major League Baseball. Before becoming a 6x all-star and 2x Gold Glove winner, Kessinger was an All-American, All-SEC SS for the Rebels. With a college career .400 batting average, Kessinger ranks 1st in Ole Miss history for career average. With a .434 average in 1964, Kessinger also holds the single-season record. Taking over for Gibbs, Kessinger returned to Ole Miss to manage the Rebels in 1991. As a manager, Kessinger led the Rebels to four 30-win seasons and the team’s first NCAA regional bid.
Nick: Jason Huisman
Jason Huisman is a random name to some people, but there is one big reason why he is on this list. He is the All-Time leader for home runs in a season at 21. The fact that is so impressive because he is a shortstop and historically that position is not very powerful. He also hit .366 with 71 RBIs in 1998.
Adam: Don Kessinger
At shortstop, the name that comes to mind is Don Kessinger who led the conference in batting with a .429 average in 1964. He was voted an All-American in 64 and an All-SEC baseball player all three seasons. He also led the conference in hitting with 56 hits in 64 and stolen bases 20 (’62), 18 (’64).