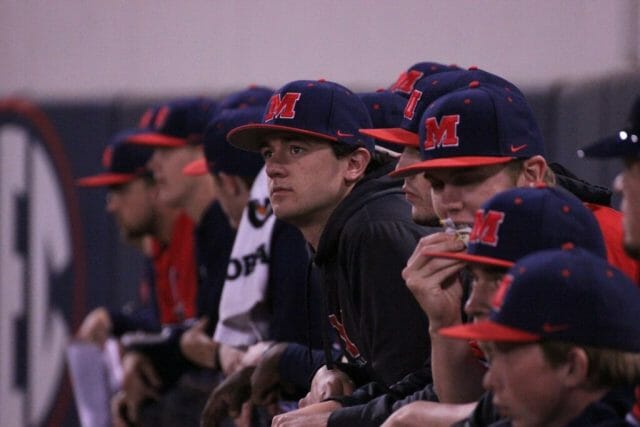 Over the weekend, the Rebels got back to their winning ways, completing a three-game sweep of Furman. Ole Miss was able to get the victories thanks to storming pitching performances from the starters and the bullpen, but the bats remained mostly silent yet again. Today, the Rebels will travel to Biloxi for the first time in 106 years for a midweek matchup against Nicholls. The game will be played at the home of the Milwaukee Brewers Double-A affiliate Biloxi Shuckers. This game will be the last tuneup before the beginning of SEC when Vanderbilt comes to town.
The Rebel pitching staff has cemented itself as one of the best in the country, ranking in the top-10 in WHIP, Shutouts, Strikeout-to-walk ratio and hits/strikeouts per 9 innings. Trying to uphold that reputation tonight will be freshman Ryan Rolsion (2-0, 2.38 ERA), who’ll make his second start of the season. In his first start against GSU, Rolison pitched five strong innings allowing no runs on just four hits. The left-hander left the game without a decision after not getting any run support from his offense.
At the plate, the Rebels got some key contributions from unexpected places over the weekend, most notably from Michael Fitzsimmons. During a team-wide slump, it’s always encouraging to see a player step up and make the most of his limited at-bats, and that’s exactly what Fitzsimmons did. The redshirt sophomore gave the Rebels the lead on Saturday with his first home run of the season and drove in the only Rebel run on Sunday. The Rebels can’t afford to keep relying on the pitching staff, and the bats must soon follow suit.
As good as Cooper Johnson’s been behind the plate, he is hitting a team-low .167 with just five hits all season. After a hot start, Thomas Dillard has cooled off significantly dropping his average to .256. The Rebels have gotten consistent production from Ryan Olenek and Will Golsan throughout the early weeks of the season. The pair has combined to drive in 14 runs and has started every game. Colby Bortles has driven in a team-high 12 runs, but with a .217 average, he may need to adjust his approach at the plate.
While the Rebels have won 4 of their last 5, Nicholls come in on a hot streak of their own having won 5 of 6. The Colonels are one of the nation’s most fundamentally sound team’s in the field, boasting a .982 fielding percentage. Junior Kyle Craft will make his first start of the year but has posted a 2.00 ERA in 9 IP throughout the season. At the plate, Alex Tucker leads the way with a .313 batting average and 17 RBI. The Rebels and the Colonels haven’t faced each other since 2006, and the Rebels hold a 15-8-1 advantage in the all-time series.
First pitch is set for 7 p.m. If you’re not in Biloxi and want to watch the game you’re out of luck as the game will not be televised, but it will be on the radio. Eli Savoie and Keith Kessinger will have the call on the Ole Miss Radio Network and OleMissSports.com.