How Double Decker Became As Big As Game Day

There were three things that Oxford did best. In 1995, a young woman, full of ambition and determined to celebrate the food, music and art of Oxford, Mississippi, couldn’t be deterred from the idea of a festival on the Square.

“I knew it would work. Now, I don’t know if that’s just because I was young and naïve… didn’t know enough to know it might not [work], or I’m bad about thinking I can make whatever happen. Once I decide, I’m like, ‘Yeah, we’re going to make this happen.’”
Robyn Tannehill was hired in June of ’95 to be the director of the Oxford Tourism Council, which is now called Visit Oxford. Tannehill immediately began work on her first project. Twenty-two years later, that project has become one of Oxford’s most celebrated weekends, bringing over 60,000 tourists to the Square.

But in 1995, that project was harder to get off the ground than Tannehill anticipated. After being turned down by John Leslie, the mayor at the time, Tannehill decided she would find another way to raise $10,000 for the very first Double Decker Arts Festival.
“I was met with skepticism from some of the city leaders. I see why they were worried about it,” Tannehill said. “They’re thinking, ‘Saturday is a very big retail day on the Square and she wants us to close the streets?’”
But Tannehill decided to take the next step and rallied up some friends to convince city leaders to close the Square for the day.
“I understood their skepticism; it just made me more determined to prove them wrong. So, I got several influential business owners that I knew to go with me to talk to him (Leslie) again,” Tannehill said. “[The city] would not give me any money, but they would close the streets.”
Tannehill raised the $10,000 by having Coca-Cola and Budweiser sponsor the festival. But there were two things Tannehill feared would cause Budweiser to back out of the sponsorship. 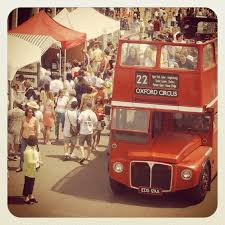 “I didn’t want beer to be sold at the festival. I wanted it to be more family-oriented, and I wanted it to be free,” Tannehill said. “Those were two things that were important then and still are. But, I talked Budweiser into sponsoring just knowing that they would be selling beer in bars all around the Square.”
After realizing that the $10,000 raised didn’t go very far, the tourism council couldn’t afford staging for the bands to perform. Fortunately for Tannehill, she had an idea and a local Oxford musician and friend to Tannehill, Bill Russell, knew where to begin.
“He had friends that ate breakfast at The Beacon that drove 18-wheelers,” Tannehill said. “So, he and I went to The Beacon one morning and asked them if they would drop their rigs on the Square Friday.”
The 18-wheeler drivers agreed to provide the stage, and Tannehill then busied herself by stapling burlap around the rigs.
“I had several bands that I didn’t pay the first year with promise of paying them double the second,” she said. While laughing, she added, “And, they trusted me that there would be a second festival.”
For the music lineup, Tannehill gathered bands that were passing through headed to New Orleans for Jazz Fest. In fact, having bands pass through was the biggest reason Tannehill set the date of the festival in late April, one of many things that hasn’t changed in all of Double Decker’s history.
The next step to get this show on the road was advertising. But having a small budget to work with, Tannehill had to be a little more creative to promote the festival.

“I used our whole advertising budget to fly in travel writers instead of placing ads,” Tannehill said.
Next, she encouraged all of the bed and breakfast owners to donate rooms and all of the “best” restaurants at the time to donate meals to the writers. For three or four days, Tannehill showed the writers all that Oxford had to offer.
“For that, they all felt obligated, in return, to write a story about Oxford,” Tannehill said. “That’s when all the articles started happening that started listing us as sophisticated little Oxford in USA Today and all of our things we hold onto now… the little blurbs from different publications? That’s really when it started was when those travel writers came and discovered us.”
Everything seemed to be coming together for Tannehill and her big dreams of celebrating Oxford. But there were a few things that didn’t cross Tannehill’s mind in the planning process of the big day.
“There are just so many funny stories that come to mind from that first [festival],” Tannehill said, “things that we didn’t think about, like getting environmental services to come do trash all day. My husband and I stayed up here all night picking up trash because I thought if the mayor sees the next day that it’s all a mess, he’ll never let me do it again. I can promise you that was a mistake we only made once.” 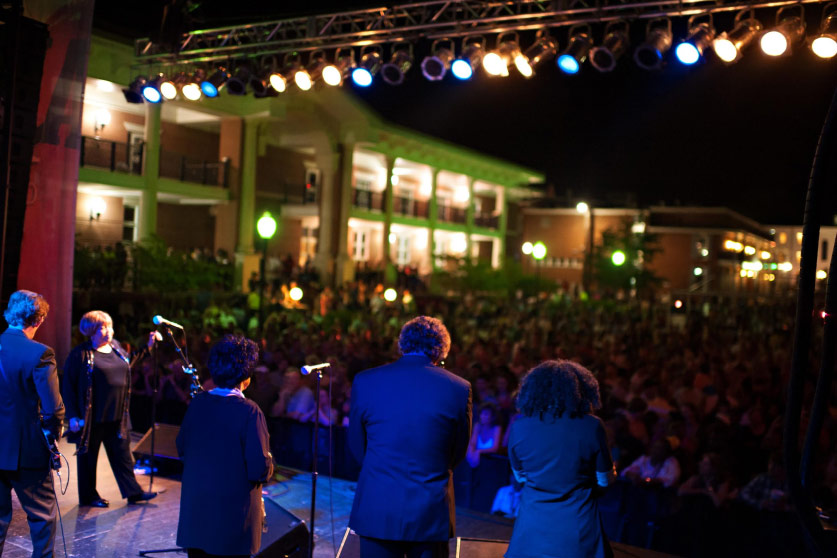 Another factor Tannehill forgot to take into consideration was where band members would change clothes. Bill Plunk, chancery clerk at the time, loaned Tannehill a key to the courthouse, which would be used as the dressing room.
“We had a group called the Steele Magnolias from New Orleans, and they wore these huge feather headdresses… I mean, huge,” Tannehill said.
But by the end of the night, and countless trash bags later, exhaustion had finally hit. Tannehill locked up the courthouse without walking back in to check on things.
“Monday morning, they were like, ‘oh my gosh, it looks like Big Bird exploded in here, what happened?’,” Tannehill said. “They were trying to have court and there were feathers all over the courtroom.”
Tannehill spent countless hours lining up every detail of festival, and she never had a doubt it would be a success in Oxford; that was until the night before the festival.
“I did not hardly sleep the night before,” Tannehill said. “I’m thinking back to the things that went into this with no money. There was just all of these things that were so enormously time consuming, and then it gets to be the morning of and you’re like, ‘Oh my gosh, I hope people come.’”


With 9,000 people on the Square that day, the inaugural Double Decker Festival of 1996 was a huge success.
Now, not much has changed. The festival is still free to the public, remains family-oriented and still celebrates Oxford’s food, music and art. If there has been anything that has changed over the years, it’s the sheer scale and size.
Mary Allyn Hedges, director of Visit Oxford, agrees with Tannehill in that “what makes it a great festival has stayed the same,” but each year, she works to improve the festival where she can, whether it’s to ensure safety or expand the music lineup.

“We work hard to make sure our festival attendees have an experience that makes them want to come back from year to year,” Hedges said. “Robyn saw a vision and created something that has probably exceeded many people’s expectations.”
While planning the festival was the job of the tourism council director 20 years ago, two decades of growth later, Visit Oxford has its very own Double Decker coordinator, Lee Ann Stubbs, whose only job is to plan Oxford’s biggest event of the year.
“I’ve been attending the Double Decker Arts Festival since I was a child,” Stubbs said. “It’s a wonderful feeling to say now, I have a part in planning it. It’s hard to even say that my work is a job because its so fun to see the festival go from start to finish.”

Stubbs begins planning for the festival in August by seeking out major sponsors, getting vendor applications ready and putting the music lineup together.
As the new year rolls around and the festival draws near, Stubbs garners help from every facet she can: the office, interns, volunteers and “pretty much every department in the city.”
“I couldn’t do it without them,” Stubbs said. “And, they all do it with smiles on their faces.”
For a weekend that all started with the idea of a “young, naïve” woman, it’s safe to agree with Tannehill and say the weekend of Oxford’s annual Double Decker Arts Festival “has become just as big as a home football game weekend.”


By Randall Haley, executive editor of HottyToddy.com. She can be reached at randall.haley@hottytoddy.com.