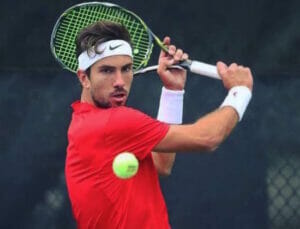 Rebel Tennis player Ricardo Jorge is in good spirits this afternoon as he finishes up playing some video games in his apartment off the Oxford Square. It’s been about two weeks since his Senior Day, which the Rebels marked by battling past higher-ranked Kentucky, following a 7-0 shutout of Vanderbilt two days earlier.
Jorge posted two huge wins to help lead the Rebels, and it clearly meant a lot to the senior. “To get those two wins, it was just incredibly special,” says Jorge. “Knowing that this is my last season made me realize that I need to enjoy every minute of it. To finish like that at home in front of the people who have supported me, it meant a lot.”
Jorge hails from the town of Tavira, on the south coast of Portugal. A talented soccer player, too, he ultimately chose to pursue tennis. But that almost didn’t happen.
At age 13, Jorge was diagnosed with scoliosis, a very serious condition that causes sideways curvature of the spine. “When I first learned of it, the curve was only around 15 degrees, which is nothing significant,” explains Jorge. “However, as I was growing up, the scoliosis worsened drastically each year and started to affect my life significantly, especially on the tennis court.”
By the time Jorge had reached his 17th birthday, his scoliosis had progressed to a 50-degree curve. He had to battle numerous injuries, and eventually his only way of playing tennis was with the help of a spinal brace.
“This made it even harder to play because it restricted my movements,” he says. “But personally, I was ashamed of my condition. I did not want my friends or other people to see it or comment on it. Back then, I wasn’t mature enough to accept it.”
Thankfully for Jorge, and for Ole Miss Tennis, the brace came off and he was able to manage the condition. In fact, he managed so well, that he began to dream of playing college tennis in the US.
“I visited a lot of schools but after coming on a visit to Ole Miss, I did not have to think twice. Even though it is different from where I’m from, the kindness and friendliness of southern people made Oxford feel like home,” Jorge says with a smile.
After a successful first three seasons in Oxford, playing between the 5-6 positions in the singles lineup, Jorge has propelled himself up the order and been a consistent winner at number 2 singles this year.
The SEC is a tough conference, and jumping up three or four spots represents a big shift in level. So to what does he attribute his improvement?
“The new coaching staff this year gave me the green light to play my game style and I feel like that gave me the confidence to play my best tennis,” he adds. “This year, I have different fitness workouts specially made to help my scoliosis. That and more rest time has allowed me to be at 100 percent every match.”
Jorge now turns his focus to the post-season. Ole Miss is scheduled to qualify for the NCAA Championships, and will find out their opponents on May 2. Confidence is high. “Everyone is excited for the post season,” he explains. “Everyone is now playing their best tennis and we are all motivated to make a good run.”
The Rebels ended their regular season on Friday with a loss to Florida in the SEC Tournament Quarterfinals, but for the senior, this is an especially emotional time. Jorge’s scoliosis has worsened to 65 percent, and he is due to have back surgery at the end of the year.
“These are my last few months of playing,” he says. “I face a lot of pain but I can’t wait to compete for the last time with my teammates. They are also my best friends and I am thankful that I get to finish my Ole Miss career, and my tennis career, with them by my side.”
This story was contributed by Joe Rogers, jwrogers@go.olemiss.edu.