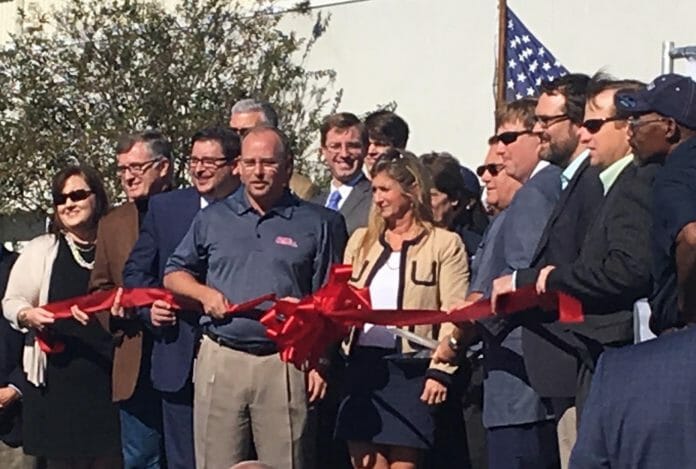 On Thursday, Oct. 26, SMW Manufacturing celebrated its grand opening in the former Caterpillar building in Oxford. Mississippi Lieutenant Governor Tate Reeves and Oxford Mayor Robyn Tannehill were there to welcome the company.
In April 2016, Caterpillar announced that within 18 months it would be shutting down five facilities in the United States, including the plant in Oxford. This would remove 240 jobs from Oxford and Lafayette County.
When the news was first announced, Jon Maynard, president and CEO of Oxford-Lafayette County Economic Development Foundation and Chamber of Commerce, was honest about the impact on the community but was hopeful that they would be able to backfill the facility with another company that might even bring more jobs to the area. Read more about the initial announcement and reaction here.
Thankfully, a partnership between Caterpillar and SMW Manufacturing has retained many of these jobs. On June 30, 2017, the Caterpillar plant in Oxford quietly ceased operations and on July 5, just five days later, SMW Manufacturing began operating out of the same facility.
SMW Manufacturing is a privately owned company that was founded in 2004. Its headquarters are located in Michigan and it specializes in heavy truck, automotive, mining, construction and industrial markets.
During SMW Manufacturing’s grand opening, tours of the facility were given to the public, and Mayor Tannehill and Lieutenant Governor Reeves were both present to thank the company for coming to Oxford, keeping jobs in the community, and for working closely with Caterpillar to make the transition from one company to the next run smoothly.
“Bringing new and better and high paying jobs to our communities is the number one priority of state government,” Reeves said. “It is an honor and a privilege for me to be here to celebrate this joyous occasion.”