Ole Miss sophomore Andrew Newman writes, performs and produces his own music, and is building quite a following around Oxford.

“If I don’t know what to do in one particular moment, I can just play music and forget about everything else,” Newman said. “Whatever I’m feeling I can try to express in music, and if I don’t, I’m still just having fun.”
His 23 tracks on SoundCloud have over 136,000 streams. He picks up thousands of listeners on Apple Music and Spotify as well under the name Lo Noom.
He recently has taken his talents to Rebel Radio, where he co-hosts a show with Bella St. Amant that can be played internationally. 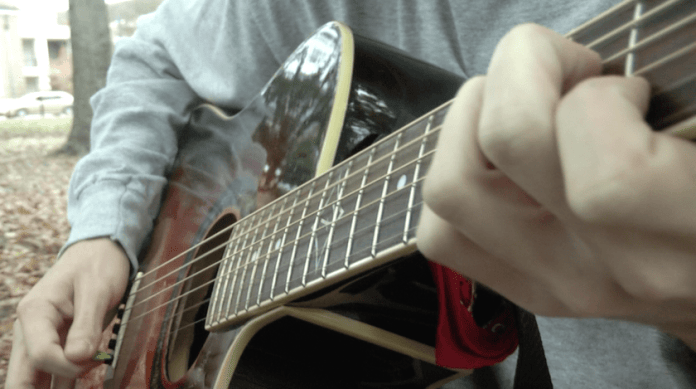 Austin Hille, station manager of Rebel Radio, said there is actually a peak in listenership during Newman’s show, Groovy Tunes.
“I feel like in a way, when he’s on air, he kind of just feels like you’re talking to a friend, so I really appreciate that about him,” Hille said. “When people are themselves, that’s one of the most entertaining and fun things they can do.”
Newman’s inspiration for producing music comes from influences like The Beatles, Bob Dylan and The Beach Boys. He says the people he encounters in Oxford also play a significant role in his writing.
“Any time I’m just living life and meeting people, it gives me inspiration lyrically, or it even contributes to how a song ends up sounding emotionally,” Newman said. “Being around all the people in this town is just fuel for creativity.”
Hille said Newman’s passion for the type of music he produces is evident in the songs he plays during Groovy Tunes.
“He shows that he is an expert in his music,” Hille said. “His songs are diversified enough so that he’s not just sticking to the same stuff each week, but it’s specialized enough so people can tune in and know what they’re going to expect.”
Newman’s talents have come a long way since he first started playing the guitar in third grade, from singing over tracks to now singing with a band.
However, his favorite thing about music is taking it a day at a time.
“When it comes to music, I just try to enjoy the moment of actually having fun playing,” Newman said. “That’s when I can be the most creative.”
Newman will be playing a house show this Sunday, Nov. 12, in Water Valley. He will be back in the booth for Rebel Radio at station 92.1 Monday from 9 – 10 a.m.

Hailey McKee is a HottyToddy.com intern. She can be reached at hcmckee@go.olemiss.edu.
For more questions or comments email us at hottytoddynews@gmail.com.