Traditions by U Club Townhomes: How the Battle for the Golden Egg Began 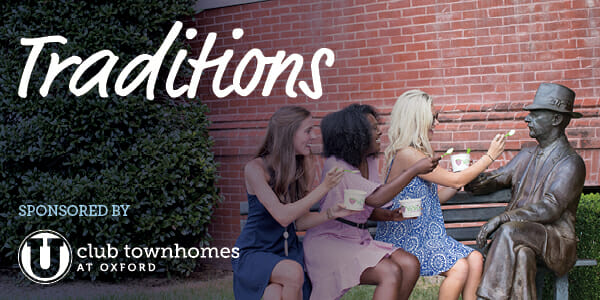 The fierce rivalry between Ole Miss and Mississippi State for the golden egg has a long and interesting history, making it the 10th longest uninterrupted series in the United States.
In 1901 the Ole Miss Rebels, known then as the Red and Blue, first faced the Mississippi State Bulldogs, known then as the Mississippi A&M College Aggies. During this first matchup, the Bulldogs defeated the Rebels 17-0. In fact, Mississippi State would lead the series for much of the early years. By 1926, the Rebels had only won five games in the past 23 matchups. However, in 1926, Ole Miss beat Mississippi State by one point and Rebel fans were ready to celebrate after a 13-year losing streak. Rebel fans rushed the field, intent on tearing down the goal post. Angry Mississippi State fans met the Ole Miss fans on the field and began fighting them off with chairs.
After the frenzy had calmed down, the student bodies from Mississippi State and Ole Miss created a trophy to encourage good sportsmanship between the two teams. The trophy would be passed back and forth between the schools based on who won the matchup and the scores would be engraved on the trophy. The trophy that was created was gold with a football on top that seemed to resemble a golden egg.
Though the trophy itself was created in 1927, the term “Egg Bowl” would not be coined until 1977. In a headline, the Clarion-Ledger stated that the “Egg Bowl is Up for Scramble.” The next year, in 1978, the editor of the newspaper ran a week’s worth of coverage of the “Egg Bowl,” and the nickname became permanent.
The 2017 matchup on Thanksgiving Day was the 114th game in the Egg Bowl series. This long-running series began between two teams who shared a love for their state and football, and today it continues between two teams who still share these interests and show it by passing the Egg Bowl trophy back and forth. After last night’s final score of 31 to 28, Ole Miss now leads with a 64-44-6 all-time series record and a 58-26-5 record in the Egg Bowl series.