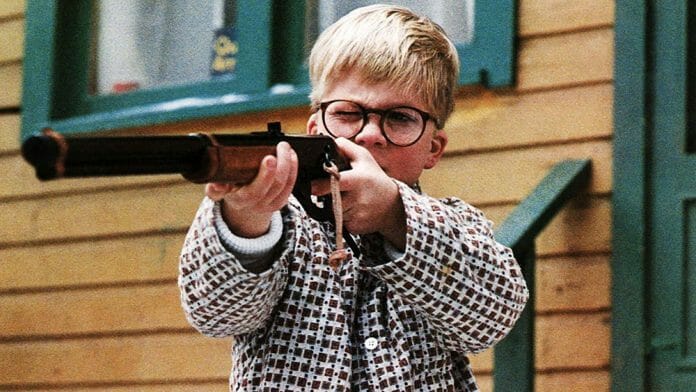 Someone on our staff had a brilliant idea: Each one of us should write a piece about our favorite Christmas movies. As editor, I could have shot it down – and I probably should have – but I didn’t. The truth is, I am woefully unqualified for this assignment. My all-time favorite Christmas movies? I’ve only watched, like, six or seven in my entire life. I like Christmas just fine, but I’m mildly allergic to holiday programming, especially the same programming year after year.
There were no “family traditions” in my family, unless you count everyone getting mad at Christmas dinner over some minor grievance and quitting speaking to each other until Easter as a tradition. We certainly didn’t gather around the TV to watch “It’s a Wonderful Life” on Christmas Eve. I usually snuck away to drink beer and smoke cigarettes and meet up with my friends on some isolated country road for a bottle rocket war. My idea of a holiday tradition was to roll the same poor teacher’s Rudolph the Red-Nosed Reindeer yard art five Christmas Eves in a row.
Now that I’m older, I’ve quit smoking, rarely drink beer and haven’t rolled a Rudolph in, like, several years. This should afford me more time to watch Christmas movies, but I usually don’t. Even so, I have decided, based on my extremely limited expertise, that these three are the best ones ever made:

“National Lampoon’s Christmas Vacation”—If you like your holiday movies loud, slapsticky and loaded with crass sight gags, this is the one for you. With a cartoonishly funny screenplay by the one and only John Hughes, “Christmas Vacation” brings together a family of Izod-wearing yuppies and a clan of country cousins for a holiday dinner that inevitably goes awry, complete with a leg-humping hound dog “yakkin’ on a bone” underneath the table and a dotty old aunt who says “grace” by reciting the Pledge of Allegiance.
Chevy Chase is great, as always. And Jane Krakowski of “30 Rock” and “Unbreakable Kimmy Schmidt” fame has a tiny role with a single hilarious line about French kissing that will make you spit out your egg nog.
But it’s Randy Quaid’s portrayal of the uncouth Cousin Eddie that carries the film. As with most great comedy, there’s an undercurrent of pathos here—the working-class Eddie’s down on his luck and just trying to make ends meet by living with his family in a camper and mooching off relatives—and Quaid makes his character somehow both repulsive and sympathetic. When the Griswolds’ family cat gets thoroughly electrocuted underneath the living room chair, Cousin Eddie, accustomed to thrifty living, thinks he can save the piece of furniture: “If you don’t mind, Clark, I’d like to see if I can fumigate this here chair,” he says. “It’s a good quality item.”
Cousin Eddie doesn’t mind too much that it smells like “fried pussycat.”

“The Homecoming: A Christmas Story”—This is the 1971 TV-movie that spawned “The Waltons” a year or two later. Set on a Christmas Eve during the Depression, it depicts a dirt-poor family living in the mountains of Virginia as they anxiously await the return of their patriarch, John, who’s been away seeking work and might be lost or missing in the bitterly cold, snowy night.
Aside from wooden performances by some of the younger stars, the characters are vividly drawn by talented actors like Patricia Neal as the mother, Olivia, a deeply romantic soul of middle age who’s still madly in love with her husband, and Richard Thomas as the sensitive eldest son, John-Boy, who wants to be a writer.
“The Homecoming” also gave us a pair of memorable characters in the Baldwyn sisters, two elderly spinsters who have survived hard times by peddling their late father’s bootleg whiskey (euphemistically called “the recipe”), and Hawthorne Dooley (played by Cleavon Little of “Blazing Saddles” fame), a charming and fun-loving preacher who, during a visit to the Baldwyn sisters’ home, isn’t averse to taking a sip of “the recipe” just to be polite.
The kindly Pastor Dooley better embodies the spirit of Christ than a high-society missionary woman who, in one of the movie’s classic scenes, aims to convert the local hillbilly “heathens” by giving away free presents only to children who can recite Bible verses. The youngest Walton girl—freckle-faced, red-haired Elizabeth—eagerly tears the wrapping off her prize only to burst into tears at the sight of it: a doll with a broken face. “It’s dead!” she cries, heartbroken. “Somebody killed it.”
It’s one of many poignant and nuanced scenes in “The Homecoming,” a made-for-TV movie that rose above its genre and deserves a wider audience today. See for yourself: Click on the video above to watch the movie in its entirety. You’re welcome.

“A Christmas Story”—Even though I have watched only about a half-dozen Christmas movies in my lifetime, I will fight anyone who says “A Christmas Story” isn’t the best one ever. It’s better than all those movies I’ve never watched—this is an indisputable fact. It may very well be the funniest movie ever made, period.
Every time Schwartz says, “Hey, listen, smartass,” I snicker. I cannot see the word “fragile” without pronouncing it “fra-gee-lay” in my head.
The script is one of the great marvels of the English language, packed with beautifully worded little gems like Ralphie’s description of the leg lamp (“the soft glow of electric sex gleaming in the window”) and the opening of the gifts on Christmas morning (“We plunged into the cornucopia, quivering with desire and the ecstasy of unbridled avarice”).
Scut Farkus and his yellow eyes. Grover Dill, Farkus’ “crummy little toadie” whose “lips curled over his green teeth.” Ralphie’s dad, bursting with pride in his leg lamp and explaining to a neighbor that he won the “major award” through “mind power, Swede, mind power.”
You can have your cutesy Christmas angels and your adorable little moppets who prove Santa Claus is real. I’d rather listen to Ralphie’s old man spluttering and cussing incoherently while the Bumpuses’ dogs tear through the kitchen.
And the only present I want under my tree is what Flick gave his old man: “A rose that squirts. People come to smell it, it squirts them.”

Rick Hynum is editor-in-chief of HottyToddy.com.