Video: Does This Oxonian Drive the Loudest Mustang in Mississippi?

Davis Burns set out to create the loudest Mustang in Mississippi.

Like many car enthusiasts, he uses his car as a form of expression, allowing the car to be his canvas for the world to see. This bright-yellow Mustang GT, with its throaty V8, can be seen and heard all across Oxford as he makes his way around town. Whether Burns is rumbling down Jackson Avenue or parked among the plethora of trucks, SUVs, crossovers, and sedans, his 2007 Mustang stands out in ordinary traffic, attracting stares from all around.

Throughout its lifetime, the sports car has gone through a series of different colors, first as silver, then dipped blue, and now a bright highlighter yellow.

“My family has always been into Fords,” Burns said. “My granddad had a 1965 Mustang. I’ve always been around them. I like that original styling. This generation is a throwback to those old models, and I fell in love with it the first time I saw one.”

“I was looking for new cars,” he added. “I saw a Mustang, and I knew, at that second, I was getting a Mustang. It was an ’05, black, premium, had all the stuff on it. Couldn’t get it because it was too old and had too many miles on it, so I kept searching and found a newer one with less miles that was completely stock.”

Since first receiving the car as a graduation gift, he has made many modificationa, mostly changing its appearance.

One of the most notable changes is the exhaust, or lack thereof. He did a muffler delete on the car and put nothing in its place, allowing the raspy Ford V8 to scream out of the back of the car. A bystander can hear it coming quite well from a good distance away, and inside the car, the tones of the motor ring loudly through the cabin. 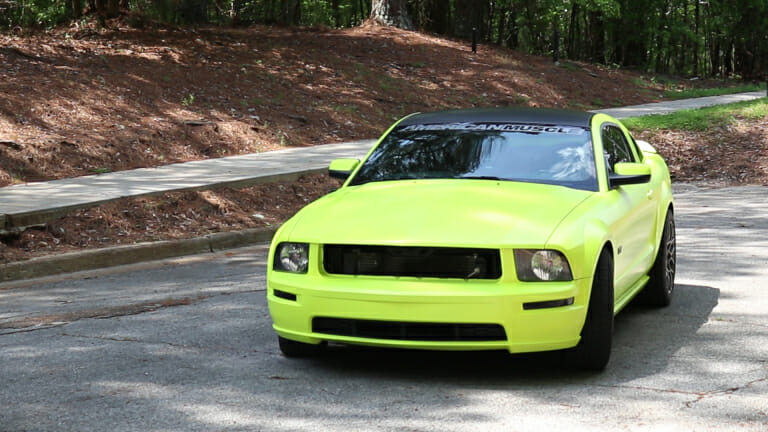 From the outside, the loud sound is matched by a loud color.

Burns’ friend and roommate, Andy Clausel, had a mixed reaction to the Mustang’s yellow hue, a far cry from the blue it was before.

“When he had said he was going to do it at first, I was skeptical but knew that if that’s what he wanted he should do it,” Clausel said. “Once it was finished, I was surprised because it looked so much better than I thought it would. Personally, not my choice, but I love it. It shows his personality and how he doesn’t care what anyone thinks about it. It’s what he wants.”

To achieve the color, Burns used a spray called Plasti-Dip. Plasti-Dip is like spray paint in the way it is applied, but it can be peeled off when it is no longer wanted or when it starts getting damaged by road debris or weather.

For his car, Burns used two coats – a base coat of a matte white and a coat of highlighter yellow to make it appear even brighter. The roof is covered in a layer of black to add visual contrast. The tail lights and side markers were blacked out, as well as the car’s exterior badges. 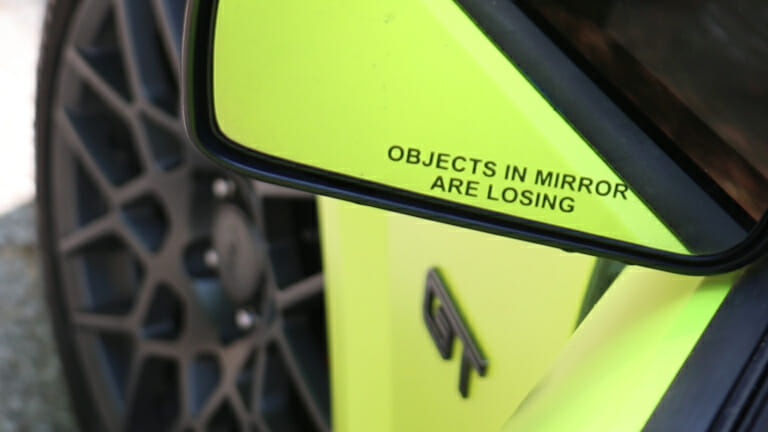 Burns believes this car will be a longstanding part of his life.

“I will never get rid of this car,” he said. “Even if my life depends on it.”

Burns has plans for the car’s future, most notably involving more power.

“I’m going to do cams soon,” he said. “I want to do turbos in the future. Of course, intake and a tune. Whatever I can afford. I plan to add a chin spoiler, rear diffuser, side skirts. A lot of cosmetic stuff. I’m probably going to tint the windshield.”

Like many car enthusiasts, the car is a reflection of Burns. Like him, it stands out in the crowd of everyday traffic with its bright color seen from miles away, and its booming voice emanating from the exhaust every time he puts his foot down. While some may be bothered by its looks and volume, he built the car for himself and only himself.

While it may change more in the future, at its core the car will still be a part of the Burns family history, tracing its way back to Burns’ role model, his grandfather. Like his grandfather, he will keep this Mustang around for years to come.

Brian Barisa is a journalism major at the University of Mississippi.