The Students Against Social Injustice (SASI) organization, along with several members of the University of Mississippi’s faculty and staff, formed a protest today to demand that the UM administration remove Ole Miss’ confederate statue from campus grounds.

SASI is the local chapter of the national student-led organization United Students Against Sweatshops (USAS). According to the group’s mission statement, they are committed to providing a safe, welcoming environment for marginalized persons on campus.

Hundreds of fliers appeared around campus Tuesday, Nov. 27 to promote awareness of “Steps for Justice”, a Confederate statue protest taking place the next day. Dozens gathered in the Lamar Hall atrium at 11:30 a.m. Wednesday as protest organizers handed out signs that said “f*ck the statue” and “take the statue down” as well as sheets of chants promoting justice.

Protest organizer and SASI secretary Em Gill led by standing on the embankment outside Lamar Hall to educate the crowd of the demands SASI wants UM administration to make:

1) “The University of Mississippi administration must remove the Confederate statue from campus
2) Administration must implement a publicized hate speech policy to protect students from the racist violence we experience on campus
3) Regardless of who is in the Chancellor’s position, administration will meet with us next  semester to discuss these demands.”

“I was impressed with Em Gill and the SASI’s organization of the event, the number of students, faculty and staff there, and I hope to see coalitions of groups continue to demand change on our campus in the future,” said Hooper Schultz, graduate student and protest attendee.

Word of the protest ignited the online community, as several voiced their support of the Confederate statue and those who lost their lives here during the Civil War. The statue was erected in 1906 by the United Daughters of the Confederacy, an American hereditary association of Southern women established in 1894 in Nashville. 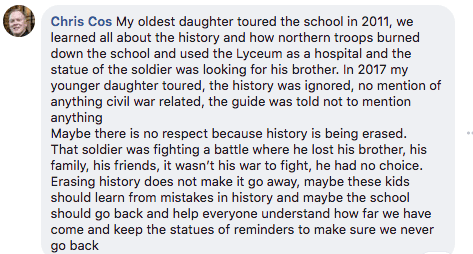 Gill and others led protesters along the walled-off entrance of the Student Union, by the Croft Institute and directly in front of the Confederate statue. She told the crowd of supporters that although she is white, racism affects her and everyone around her.

“None of us are equal until all of us are equal,” Gill said. “All of us have identities that are privileged and oppressed. We all have a stake in this fight.”

On the Circle grounds, several students of color expressed personal stories why they believe the statue should be eliminated from campus.

Bianca Martinez, an Ole Miss student, and Arquvas Williams, president of SASI, spoke to the crowd regarding discrimination both faced previously in their lives.

“Two hundred years of hateful rhetoric has been too long,” Martinez said. “It is time for change.”

The protestors continued their march from the statue through the Circle until they reached the steps of the Lyceum, home to the offices of the university’s administration.

Jessica Wilkerson, assistant professor of history and southern studies, took center stage to deliver a speech detailing the statue’s history. She also named activists throughout history who fought for equality and listed reasons why the statue should be removed from the university’s campus.

“We love education and the [Confederate statute] does not educate us,” Wilkerson said.

Wilkerson concluded her speech by saying the statue commemorates and reveres the Confederacy and the institution of slavery.

“[The statue] reveres a memory of the ‘Old South’ staked on the enslavement of black people,” she said.

Protesters ended the march inside the front doors of the Lyceum with their demand letters in hand chanting, “What do we want? Justice!”

“With final exams scheduled next week, they look forward to meeting with our students for a conversation sometime early in the new calendar year,” he said.