Oxford Conference for the Book Welcomes Authors for 26th Year 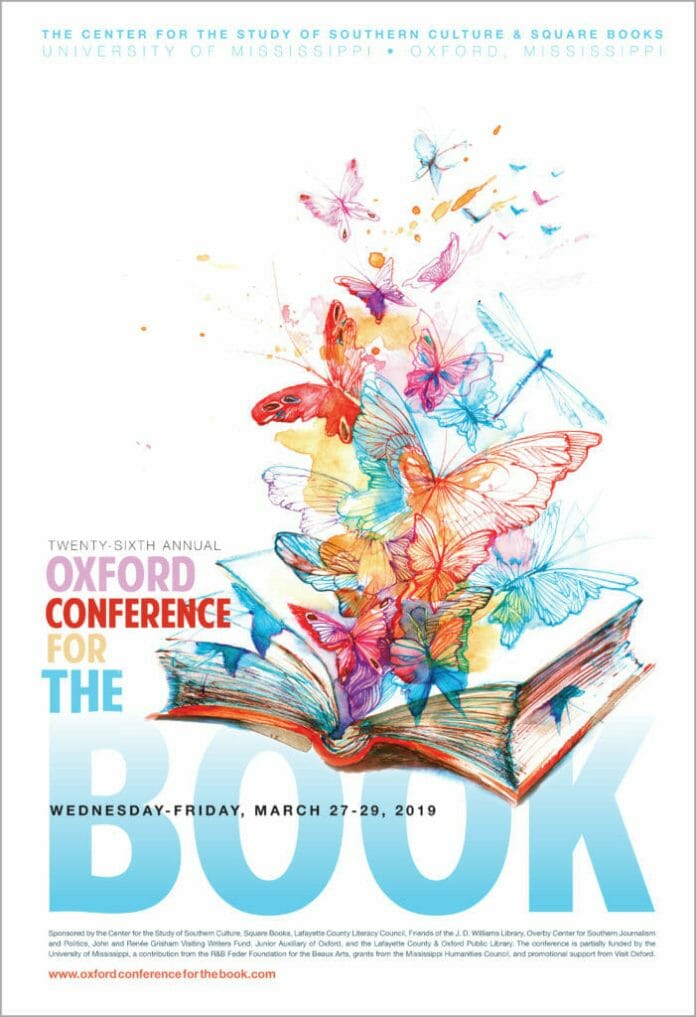 What do a championship poker player, the U.S.-Mexico border controversy and the Appalachian South have in common? They are all part of this year’s Oxford Conference for the Book, set for March 27-29 at the University of Mississippi.

The 26th annual event is a mixture of authors, editors, historians and scholars who are interested in the written word.

The longest-running event put on by the UM Center for the Study of Southern Culture is free and open to the public. The only exception is the March 27 opening reception featuring music, food, drinks and conversations with conference attendees and guest authors at Memory House, 406 University Ave. Tickets are $50 and are available online.

At 11:30 a.m. that day, Travis McDade, author of “Torn From their Bindings: A Story of Art, Science, and the Pillaging of American University Libraries,” gives the keynote lecture after a free luncheon sponsored by the Friends of the Library in the Faulkner Room in the Department of Archives and Special Collections at the J.D. Williams Library. The lunch begins at 11 a.m. and reservations are required.

“I’m beyond pleased with how well this conference coordinates across the campus with various organizations, departments and institutions,” conference director James G. Thomas Jr. said. “The opening lunch, sponsored by the Friends of the Library, is a great example of this conference’s commitment to partnering with our friends – old and new – on campus and in Oxford.”

New to the conference this year is a partnership with the Department of Philosophy and Religion, Department of Psychology, Sally McDonnell Barksdale Honors College and the Ole Miss Student Union to bring author, professional speaker, decision strategist and former professional poker player Annie Duke for the “Making Smarter Decisions When You Don’t Have All the Facts” panel, set for 4 p.m. March 28 in the Overby Center for Southern Journalism and Politics.

The philosophy department teaches many courses in logic, and professor Neil Manson teaches common statistical fallacies in connection with probability theory in his courses.

“Still, there is only so much excitement a professor can convey in a classroom, and the material can seem remote,” Manson said. “Having a world-class poker player – someone who has literally made millions of dollars based on her deep knowledge of the very material we cover – will definitely make the ideas in probability, statistics, and psychology come alive for our students.

“It also helps that she’s a great writer with lots of down-to-earth examples and stories, not to mention that she nearly won ‘Celebrity Apprentice’ 10 years ago, which is pretty awesome.”

All Ole Miss students are invited to a reception for Duke at 12:15 p.m. March 28 in the Sally McDonnell Barksdale Honors College.

As in years past, “Thacker Mountain Radio Hour” will host a special Oxford Conference for the Book show with Leanne Shapton, author of “Guestbook: Ghost Stories,” and Ken Wells, author of “Gumbo Life: Tales from the Roux Bayou,” at 6 p.m. March 28 at the Lyric Theatre, at 1006 Van Buren Ave., just off the Oxford Square.

At 8 p.m. at the Powerhouse Community Arts Center, SouthDocs filmmaker Rex Jones will screen his film “La Frontera” with Mark Hainds, author of “Border Walk.” Both the film and book document Haind’s 1,000-mile walk along the entire stretch of the U.S.-Mexican border.

At 1:15 p.m. March 29, William Boyle, UM adjunct instructor in writing and rhetoric, moderates a panel titled “On the Fringes of Noir,” with authors Willy Vlautin, Elle Nash and Gabino Iglesias. The panel is unified by Dennis Lehane’s definition of noir as “working-class tragedy,” Boyle said.

“Willy is my favorite novelist and songwriter, so I knew he’d be the first writer I’d invite,” Boyle said. “He’s rarely, if ever, identified as a noir writer, but he works the edges of the genre in some really interesting ways.

“From there, I thought it’d be great to invite a couple of other young writers who work the edges of the genre in varying ways.”

The Children’s Book Festival is held in conjunction with the OCB on March 29 at the Gertrude C. Ford Center for the Performing Arts, with more than 1,200 first- and fifth-graders from Oxford and Lafayette County schools in attendance, all of whom receive their own copy of their grade’s book.

The Oxford Conference for the Book is sponsored by the Center for the Study of Southern Culture, Square Books, Lafayette County Literacy Council, J.D. Williams Library, Friends of the J.D. Williams Library, Overby Center for Southern Journalism and Politics, Junior Auxiliary of Oxford and the Lafayette County and Oxford Public Library. The conference is partially funded by the university, a contribution from the R&B Feder Foundation for the Beaux Arts, a grant from the Mississippi Humanities Council and promotional support from Visit Oxford.

For a full schedule and more information, visit http://www.oxfordconferenceforthebook.com and the conference’s Facebook page. Register for special events on the conference website or by contacting conference director James Thomas Jr. at 662-915-3374 or by email at jgthomas@olemiss.edu.