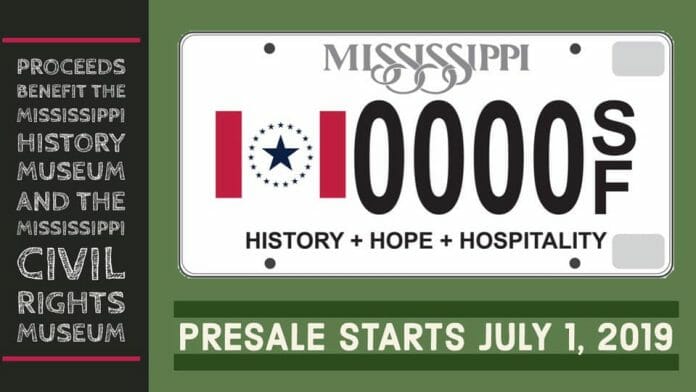 Mississippi residents have a new option when it comes to the visual representation of their license plates: The Stennis Flag.

Gov. Phil Bryant signed a bill (SB 2570) Tuesday which gave the nod for the state to sell a variety of new specialty license plates, including the Stennis Flag.

The flag encompasses 19 stars in a circle and one in the middle, representing Mississippi being the 20th state to join the Union in 1817. The flag also takes on the exact colors of the United States flag.

The Stennis Flag was designed by Jackson native Laurin Stennis. She has been steadfast in the charge to change Mississippi’s official state flag.

Stennis said she was thrilled when she heard that the governor had signed SB 2570 because he had until April 20 to take action. She did not know when he would divert his attention to a specialty tag bill.

There have been three key tenets Stennis has focused on since the initial campaign to change the state’s flag: bipartisanship, grassroots effort and positivity.

“Those three things have been the maypole since the inception,” Stennis said. “It has allowed a much broader audience to come to the table.”

Stennis initially had not planned on tackling the concept of having The Stennis Flag on a specialty tag because she wanted to focus her energy and resources to the actual changing of the flag; however, she was approached by a Republican representative who ended up sponsoring the bill.

She said the legislation regarding The Stennis Flag has been encapsulated with “hardcore bipartisanship.”

The state legislature killed three bills in February which advocated for a new state flag. Each bill proposed replacing the current flag, which embodies the Confederate emblem, to Stennis’s design.

Stennis told Hottytoddy.com before the Legislature killed the bills she would not be surprised if state lawmakers did not pressure their fellow constituents to pass legislation changing the controversial state flag during an election year.

The three bills that advocated for an official change to the Stennis Flag were filed in early January by several lawmakers. At the time of filing, there were two in the House: one by Rep. Kathy Sykes and one by Rep. David Baria; and one in Senate that is sponsored by Sen. Derrick Simmons, David Blount, John Horhn, David Jordan, Sollie Norwood and Kevin Butler.