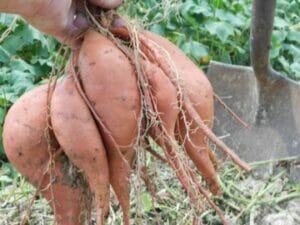 By Ellen Graves, Senior Journalism Major, Meek School of Journalism & New Media
ellengraves13@gmail.com
You can’t see it, but there is a fingerprint on every sweet potato grown in Vardaman, Mississippi. It’s from a worker who has labored on a hot, humid day in a field filled with thousands of sweet potatoes.
Vardaman’s foundation is built on sweet potatoes, and the farming families depend on it for their livelihood. This small farming town is home to a total of 104 farming operations and 25 packing sheds.

Benny Graves, executive director of the Mississippi Sweet Potato Council (who happens to be my father), has worked with Vardaman’s sweet potato industry for more than 30 years. “It’s a hard-working, hard-scrabble town,” he says. “Growing sweet potatoes and producing this food crop is hard work, and these people are not scared of hard work.”
The first sweet potato farmers arrived in Vardaman in 1910 and created farming operations that have been passed down from generation to generation.
“Well my family had always been farmers, and I really enjoyed it as I was growing up and working,” says Tim Edmondson of Edmondson Farms, who has lived in Vardaman his entire life.“The bug was there, and I always wanted to farm.”
The Vardaman sweet potato industry produces up 80 percent of the 22,000 acres of sweet potatoes grown in Mississippi. The United States produces about 110,000 acres a year. In 2011, the Mississippi sweet potato industry accounted for $78 million of Mississippi’s total $7 billion agriculture revenue.
“This is one of those crops that when you are growing, you are creating wealth that’s coming from Mother Nature’s sunshine, water, and good soil,” Graves says.

Several factors go into making Vardaman a good fit for the sweet potato.
“We have great soil, and we have people that know how to grow sweet potatoes,” Graves says. “This knowledge is not gained in a book or the university that teaches you how to grow sweet potatoes. You gain this knowledge from experience and from generations that have done it before you.”
“You know, I’ve had some friends in North Carolina that’ve been down here and they’ve actually gotten the soil in jars and carried it back to North Carolina State University to try and see what’s in our soil that makes the potatoes look like they do. And you know, they just can’t figure it out,” Edmondson says. 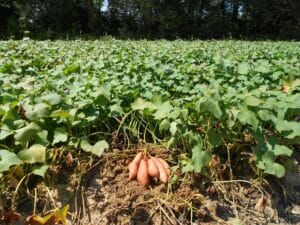 The sweet potato season starts in March and ends with harvesting in the first week of November.
“Sweet potatoes are a vegetatively propagated produce item,” Graves explains. “That means they don’t have any true seed, so you have to go to the mother plant that was developed at a research facility and get your plant material from them.”
The process begins by planting the best seed potatoes in March and allowing them to grow for six weeks until plants are produced. After the plants reach a height of 10 inches, they are cut and planted in the field during May and June.
Each plant grows four to seven sweet potatoes and 13,000 plants can be planted to an acre. Farmers must go back to seed labs like the one at Louisiana State University every three or four years for certified seed stock.
“If you’re not careful, you grow your own potatoes and have them cycle over and over for three or four years, they will mutate and it won’t be as tasty or pretty shaped,” Graves says.
Edmondson typically grows 2,800 acres of sweet potatoes and operates a packing shed that sees about 60 million pounds of potatoes come through a year.
One of the major concerns each farmer faces is how the weather will affect the crop.
“Mother Nature controls everything that we do, and we just know that going in,” Edmondson says. “You learn to manage your money real well. When the good years come, you stick it back and hold it for the bad ones because you know it’s coming.”
Graves also shares the same concern about the weather but notes that farmers do their best to minimize disaster.
“We try to maximize our chances of making a good crop, but we are always battling the weather,” Graves says. “You don’t plant all your crop in just one place, because one location may not get a rain. If you plant it in three locations, spread it out, you may have a chance.“

Farmers not only work during planting season but all year selling and transporting their crops to customers.
“Many of the growers are also their own broker. They do it all—grow and sell and manage the money,” Graves says.
“It’s more of a business, a technology-based business,” Edmondson says. “We all have smart phones, computer screens, iPads. We’re working on those things as much as we’re driving a tractor.”
Technology has become more integrated with the farming industry and farmers are beginning to understand its benefits.
“We have temperature-controlled storage now, and that’s a big change. We are able to store sweet potatoes, high quality sweet potatoes year ’round that allows us a much larger marketing time,” Graves says.
Also, farmers are using global positioning technology to calculate the exact amount of potatoes they can get from the field.
“You have some that are the early adopters. Some are later, old-fashioned, but you generally see the more successful ones are the ones that adopt technology first,” Graves says.

Farmers in Vardaman sell sweet potatoes to the fresh market and foodservice sectors. Sweet potatoes have been gaining more popularity in the past couple of years, with more restaurants putting them on their menus.
“Sweet potato French fries have just taken off. Right now we are excited about Burger King being the first large chain that has added sweet potatoes to the menu,” Graves says.
With so many Vardaman farmers pushing the same product, competition is inevitable.
“There’s only so many customers that buy sweet potatoes in the country. We’re all gonna run into each other sooner or later,” Edmondson says.
“They compete on one hand, but if someone needs some help they will be the first one to lend a hand,” Graves says. “Most of the time we just try to sell more sweet potatoes on the plate instead of fighting each other and try to build this thing.”

Hands in the Soil 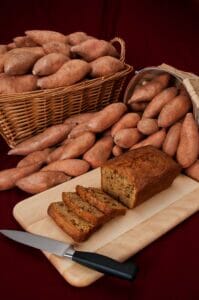 Although technology has provided several advantages for the farmer, the sweet potato industry is not one that is highly mechanized. Often farmers have to hire non-immigrant Hispanic workers from Mexico through the H-2A program to have a workforce large enough to use during the growing season.
“The guys come in on the visa program and work X amount of hours, X amount of months. They work and they go back,” Edmondson says. “Everything is offered equally to an American citizen just as it is a Hispanic. It’s just very hard manual labor, and most people do not want to do it.”
“There is not a machine that takes it from the ground and puts it in the box. Somebody has to place that potato with their hands into that box,” Graves says. “So there are multiple levels where someone, basic labor, is needed to move the potatoes.”
At times Graves and Edmondson think the farming industry is under-appreciated.
“We don’t get a lot of glory,” Graves says. “It’s not a glitzy crop. It’s a sweet potato, a basic comfort food that’s not gonna be like a fancy strawberry.” However, events such as the annual Sweet Potato Festival are held each year in Vardaman during the first weekend in November to promote the sweet potato.
“It started back in the days of governor Bill Waller, when they designated Vardaman as the ‘Sweet Potato Capital of the World’ and started the festival to celebrate the end of the harvest,” Graves says.
“My family has always come over to the Sweet Potato Festival. It’s kinda been a traditional thing we do every year,” festival attendee Cortez Moss says. “So I drove on over to hang out and actually get some sweet potatoes to take back to Greenwood.”
For Edmondson, being his own boss and working with the land is his favorite part of being a sweet potato farmer.
“I love the outdoors … you kind of see God’s work in your farming from start to finish, the harvest, and it’s just something I love every year,” Edmondson says.
Even on Edmondson’s toughest day of farming, he has his reasons for not giving up.
“Maybe my car payment and my mortgage payment,” he says with a laugh. “And maybe that I know tomorrow will be better. That’s about the only hope that you have.”

Column: Silent for a Year, the Grove Atmosphere Returns