Oxford’s FNC Park is taking great measures to ensure that local athletes are able to practice and train year round.

Plans for this new, state-of-the-art building began with a casual conversation.

“It started with a conversation between myself and one of the doctors in the Oxford Orthopedic Group,” says FNC Park Director Brad Freeman. “My son and his son play on the same soccer team. We were just kind of talking out loud, really, and he said, ‘Well let me see what we can do.’ Long story short, we’re now here.”

The building is named after the Oxford Orthopedic Group, the team of orthopedic surgeons responsible for sponsoring the facility. They have generously contributed $150,000 towards construction — an amount that Freeman says the city and county matched with $75,000 each. 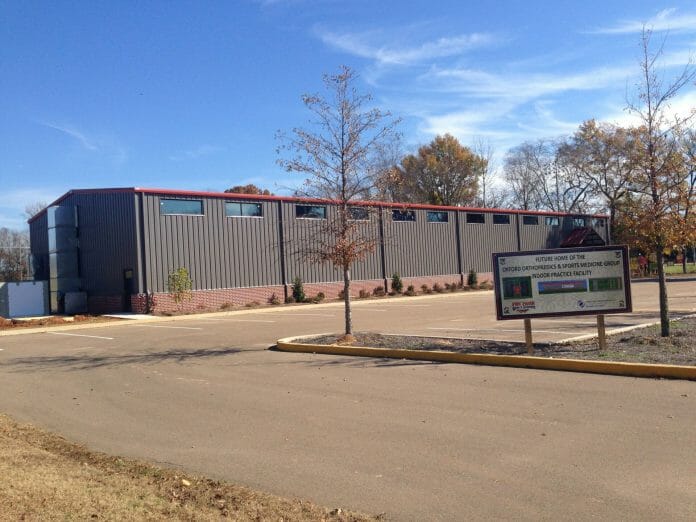 The 7,500-square-foot space, lined with artificial turf, will facilitate all of FNC Park’s sports including baseball, flag football, soccer, softball and the newly formed lacrosse program.

“What we’re going to do is install six retractable batting cages, meaning the cages will be able to go up and down from the ceiling,” says Freeman. “We want to do it that way so that when the other sports that we service [at FNC] want to use the facility, they can press a couple buttons, and have the cages raise to the ceiling. Once they’re out of the way you’ve got this huge open indoor green space. There are so many different possibilities.”

The building will also house an elevated observation deck for parents and coaches overlooking the batting cages and turf field. If you’re feeling hungry, don’t fret. A fully stocked snack bar is located in the lower level. “This facility will provide people with a place to do training that they couldn’t do necessarily outside,” says Freeman. “You know how our weather is in Mississippi. It’s all over the place. It will also provide the athletes with the chance for after hours training. It’s just going to fulfill a niche that no where else in Oxford has.”

“Our goal is to be the best facility in the state and in the Southeast, Freeman says. “Now I know that’s debatable, but we feel like this will definitely be a step in the right direction. We’re excited. It’s just going to add a new dimension sports training in Oxford and Lafayette County.”

Photos and story by Lacey Russell. Lacey is a journalism student at the Meek School of Journalism and New Media.