Newk's Is the Bomb of Fast-Casual Restaurants 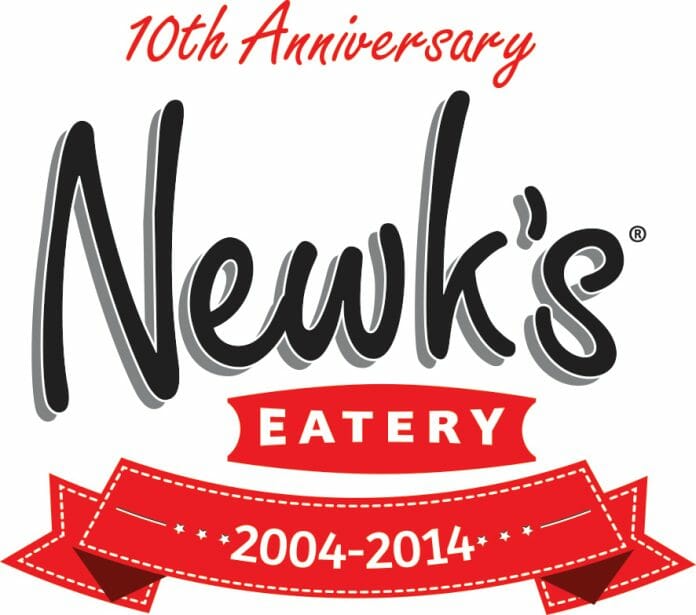 Newk’s, born in Oxford 10 years ago, is growing into an industry leader in the fast-casual food category.
It will celebrate its 10th anniversary with a reception at the founding University Ave. restaurant tomorrow. The blossoming organization holds fast to the customer-service, fresh-food focus that launched it here.
Newk’s has grown into one of the nation’s fastest growing franchise restaurant chains, with 66 units across 13 states. Now, as Newk’s marks its 10th Anniversary and prepares to open 15 restaurants this calendar year, the owners have set their sights on opening a total of 200 restaurants by 2019, a goal that will further bolster the company’s position among Technomic’s 50 top fast-casual chain restaurants nationwide.
“Yes we’re proud of our growth but it’s all based on each individual restaurant’s commitment to fresh ingredients, thoughtful preparation and outstanding customer service,” explained Melinda Spillee, Newk’s marketing director, who is in Oxford for anniversary events at the original restaurant on University Ave. starting tomorrow morning.

“Nobody else does exactly what we do in terms of serving all fresh food,” Spille said. “For example, we marinade our fresh chicken overnight and hand slice it. It’s never frozen as you’ll find at other restaurants in our category. We grill our own mushrooms and spare no expense in the decor of each restaurant.”
Spille added that the anniversary event tomorrow is a gesture of appreciation to the vendors, customers, staff and people of Oxford who have helped make Newk’s a success. It’s also a chance for attendees to see the refurbishments that have just been completed at the restaurant on University.
Newk’s original restaurant concept and its menu are the inspiration of Chris Newcomb, who has both a natural acumen for all things culinary and a palate that serves to perfect ingredient combinations. In fact, most of the restaurant chain’s most popular menu items are the result of longstanding family recipes finding their way onto the menu. The recipe for Newk’s signature white barbecue sauce, which is featured on The Newk’s Q sandwich, is so coveted that the company prepackages the spices to protect the integrity of the recipe. Newk’s even operates its own bakery to ensure the handmade quality and trade secrets of its signature cakes.
“It’s the casual, family-friendly atmosphere and the menu variety that bring people in,” said Phillip O’Reilly, who in partnership owns two Newk’s Eatery locations in The Greater Nashville Area. “It’s the freshness, quality and flavorfulness of the food that keeps them coming back.”

Newcomb’s success in the fast-casual restaurant segment began 25 years ago when, together with his father, Oxford dentist Dr. Don Newcomb and family friend Debra Bryson, they built the McAllister’s Deli brand. After selling that concept in 1999, Newcomb dabbled in franchise ownership while developing plans and perfecting recipes for a culinary inspired concept that would set the bar for freshness in the fast-casual industry. In February 2004, the team of three launched a restaurant concept with a streamlined menu of freshly prepared hand-tossed salads, oven-baked sandwiches, California-style pizzas and made-from-scratch soups prepared in an open view kitchen and delivered tableside in an upscale, family-friendly dining room. The concept is centered around the Newk’s Roundtable, which is featured in the center of every restaurant and offers complimentary toppings and add-ons, such as imported capers, roasted garlic, crisp jalapeno peppers, breadsticks and more. The hallmarks of the “fresh-casual” brand are its cornerstone for success, which has yielded nine company-owned and 57 franchise-owned restaurants.
“Many of our franchisees are seeing double-digit year-over-year growth,” said Newcomb. “Through seasoned, multi-unit franchise expansion, we will solidify Newk’s position in the Southeast and begin to expand contiguously into new territories.” The company has sold the rights to more than 100 new restaurants opening over the next four years, including development plans in the lower Midwest, Texas, the Carolinas and Maryland, and expects to reach a total of 200 locations within five years, he added.
The founding team attributes the franchise success to streamlined, low-labor operations designed for efficiency, site adaptability and multiple revenue opportunities, as well as the Newk’s University training program designed to ensure consistency and success across the chain. In addition to in-restaurant dining, Newk’s offers a robust catering operation and daily prepared Grab-N-Go menu items such as bulk portions of Newk’s favorites like chicken salad and pimento cheese in the refrigerated case near the entrance of each store.
“The industry will see two kinds of growth from Newk’s Eatery over the next 10 years – both further penetration where the brand is established and spreading out into new markets,” added Newcomb, who says one key to success is remaining a lifelong student of the industry. “One thing that will remain constant through that change is our culture – one that is based on the values on which this company was built: freshness, quality ingredients and an exceptional customer experience.”
To learn more about the Newk’s Eatery and franchise opportunities, visit www.newks.com, join the Roundtable Club for email updates or follow Newk’s on Facebook and Twitter.
Compiled from Newk’s press releases and HT.com staff reports
Facebook
Twitter
Pinterest
Previous article
Ten Outstanding Seniors Awarded Hall of Fame Distinction
Next article
Connecting Humans and Pets, One Adoption at a Time