February 5, 2014
0
330
Coaches and fans across the country are riding the roller coaster of high school football recruiting. At Ole Miss, Head Coach Hugh Freeze and his staff appear poised to bring in another excellent class to join last year’s, with Rebels274Sports ranking the current group of commits at No. 13 in the nation..
Many of the young men have already given verbal commitments to Coach Freeze; however, absolutely nothing is binding until they sign their NCAA National Letter of Intent on Feb. 5 — hence the importance of the visits.
From all accounts, recruits and family members thoroughly enjoyed their time in Oxford and were pleased to better get to know one another, the coaching staff and the returning Rebel players.
Some players felt the visit solidified their choice of Ole Miss as their top school; some have placed the Rebels higher on their list; and, one even flipped from State to Ole Miss. Hotty Toddy offensive lineman Sean Rawlings from Madison, Miss.
The current list of players who visited January 24-25 and their updated status is below. Thank you to Brandon Red at Rebels247Sports for the in-depth recruiting information he provided.
Sammie Epps, TE, Greenwood, Miss. (Signed)
Roderick Taylor, OL, Jackson, Miss. (Signed)
Dayall Harris, WR, Jackson, Miss. (Signed)

Breeland Speaks, DL, Jackson, Miss. (verbal commit) – Many wondered if Breeland is at all swayed by the current push LSU is making for him; however, it appears he is still strongly committed to Ole Miss.  He told the recruiting experts at Rebels247Sports that Ole Miss is still his top choice and added: “My favorite part of the trip was being with the other recruits. It was nice hanging out with those guys.”
DK Buford, ATH, Oxford, Miss. (Signed)
AJ Moore, LB, Bassfield, Miss. (Signed)
CJ Moore, DB, Bassfield, Miss. (Signed)
Jordan Sims, OL, Homewood, Ala. – (has offer from Rebels/Ole Miss now leads) – Per Rebels247Sports, Sims’ top choice is Ole Miss; however, the lineman is still watching Auburn closely. The recruiting site spoke with Sims and reported him as saying: “After this visit this weekend, Ole Miss is my leader with Auburn right behind. Everything was great. I got to see the coaches and spend a lot of time with them. They definitely lived up to everything I had heard and been told about them.”
As of today, Rebels247 reports Auburn does not have a scholarship spot open for Sims, but the school is remaining in contact with him. The recruiting site added: “There is a chance they could bring Sims in on an official this weekend if something opens up. Ole Miss still may hold the edge, but Auburn is a serious contender.” So for now, Ole Miss is his leader—but stay tuned!

Isaiah McKenzie, ATH, American Heritage, Fla. (has offer from Rebels/Ole Miss is now in his Top 3) – McKenzie took an official visit to Florida the weekend before visiting Ole Miss. He has a visit scheduled Friday with Notre Dame. Of his visit to Ole Miss, McKenzie told Rebels247, “It went great. I had fun. I liked the coaches, the guys and just everything about it.” He will make his decision on Febr. 5 and declared: “It’s definitely between Ole Miss, Notre Dame and Florida.”
Gary Wunderlich, K/P, Memphis, Tenn. (verbal commit)
Chris Williams, DT, Sandy Creek, Ga. (verbal commit)
Tyler Putman, OL, Southaven, Miss. (verbal commit)

Dacorius Law, ATH, Haines City, Fla. (has offer from Rebels/Ole Miss now his leader) – Law  told Rebels247Sports Ole Miss is his frontrunner following his visit to Oxford. “The visit was great, everything was great,” he said Sunday morning. “It was the school, the people and the town. The people on the team were great. Ole Miss is my leader, no doubt about that.”
Victor Evans, DL, Skyline, Tex. (verbal commit) – Evans is still a solid commit and expressed his affinity for Ole Miss in a conversation with Rebels247Sports after his visit. “It was way better than I thought it’d be,” he said. “I knew I was going to have a great time, but it was an amazing time with my new teammates and brothers. Also, my parents loved it.” Evans relayed he is now good friends with Laquon Treqdwell, Denzel and Robert Nkemdiche, Bo Wallace, Laremy Tunsil and Quincy Adeboyejo.
Sean Rawlings, OL, Madison, Miss. (Signed, after switching from State to Ole Miss) – Rawlings attended last weekend’s official visit to Oxford as a State commit; however, he left believing Ole Miss is where he belongs. He told Rebels247Sports Ole Miss will play him as a center and he is planning on redshirting this fall.
Surprise Visitor
Rebel hearts raced with excitement this week when news hit that Malachi Dupre, the nation’s No. 1 wide receiver prospect, was in Oxford for an official Ole Miss visit.
Dupre is a 6-2.5, 187-pound wide receiver out of John Curtis (La.) who has offers from Florida State, UCLA, Alabama and LSU, to name a few. He had an official visit to Florida State last weekend and has also taken official visits to Alabama and LSU. Crimson Tide head coach Nick Saban will be at Dupre’s home today, followed by LSU’s Les Miles.
While in Oxford, Dupre spent time with last year’s No. 1 wide receiver prospect and current Rebel Laquon Treadwell. While hanging out with Treadwell, Dupre tweeted: 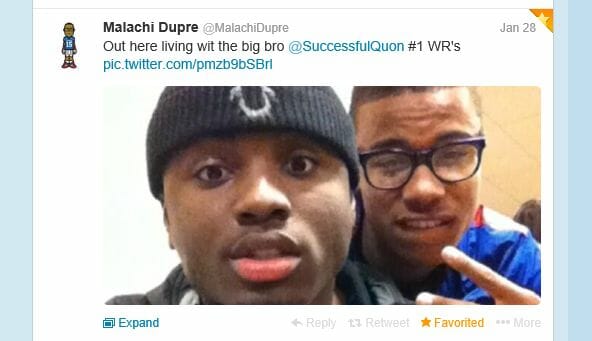 Today on Twitter, Dupre stated he will announce his decision on February 5 at 9:30 am CT on ESPNU. He followed that tweet with one that simply said:

Next Wednesday looms large
When it is all said and done, every school hopes to land its top commits next Wednesday, as well as gain some last-minute signees who have chosen to keep their final decision top-secret until signing day.
With some of this year’s freshmen—Laquon Treadwell, Tony Conner, Robert Nkemdiche, Evan Engram, and Laremy Tunsil — making such an immediate impact for the Rebels, Coach Freeze and his staff are obviously aware of how important National Signing Day will be to the future of the Ole Miss program.
Stay tuned to HottyToddy.com for all your recruiting news and updates, profiles on the members of the 2014 class, and up-to-the-minute coverage of all the signees on Feb. 5.
— Evelyn Van Pelt, HottyToddy.com sports writer
Facebook
Twitter
Pinterest
Previous articleOle Miss National Signing Day Coverage
Next articleOle Miss Signee Epps Says Ole Miss Is His Dream School