For most, the mention of spring sports brings to mind visions of baseball games and tennis matches. However, it’s also badminton season in Oxford!


Badminton is a racquet sport where a featured object, called a shuttlecock (or shuttle, for short), is passed between players on a rectangular court divided by a net. The goal is to keep the shuttlecock in the air as long as possible. A point is scored when the shuttle hits the floor.
During a badminton match, a shuttlecock can reach speeds of 206 mph, requiring players to be in excellent physical condition, quick, and have good hand-eye coordination. Badminton was officially introduced as an Olympic sport at the 1992 games in Barcelona, Spain, launching the game to an entirely new level of competition.

The Ole Miss Badminton Club is preparing for their annual competition, which is open to the public, on March 22. The 12-hour event will take place in the Turner Center starting at 9 a.m.
There are several different divisions of competition – men’s and women’s singles, doubles, and mixed doubles.
Ole Miss Badminton began hosting this competition in 2009 and continues to host many teams from across the nation. The club did not host the event last year, but in 2012, the University of Tennessee, Emory University, University of Missouri and more badminton teams traveled to the Oxford.
Competitors are provided a free lunch and dinner, along with shuttlecocks in each round of the tournament. Winners are awarded a trophy and the club is still working to secure sponsorship for monetary prizes.
“We want our members to get an experience to compete with players from different badminton clubs, make friends, share their thoughts about this game and try to promote this sport as much as we can in USA,” Samarth Solanki, computer science major and club treasurer, said.
Online registration is available through the club’s website and is open until March 21.
Club membership is not necessary to participate in the competition, but the club encourages anyone interested to join the team.
“It’s a pretty diverse group,” club president Sumudu Tennakoon said. “Anyone who wants to come and play badminton is welcome.”
About Badminton
Specific badminton equipment is important to any match, of course. Special racquets with tight strings and customized grips are standard. The shuttlecock is a cone-shaped object (often called a projectile) with sixteen overlapping feathers stuck into a rounded base, called the cork. Badminton courts closely resemble tennis courts. See diagram below for specific badminton boundaries and measurements. 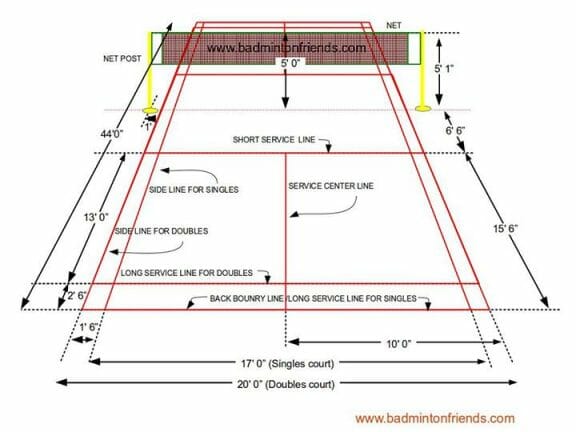 For recreational badminton matches, synthetic or plastic shuttlecocks are often used for convenience and price purposes. Badminton is often a popular beach or lawn game when not played in a competitive arena. Competitive badminton is played indoors, because wind can greatly affect the direction and speed of the shuttlecock.
The game starts with a score of “love all”, while both teams and/or players lovingly have zero points each. Points are awarded for faults done by the opponent. Badminton is scored in ‘loves’, much like tennis, however without the deuces.
The score, whether odd or even, determines which side of the court from which the player serves. If the server’s score is even (2, 4, 6…), the shuttlecock must be delivered from the right side of the court and a server with an odd score (1, 3, 5…) must deliver from the left. See diagram below for clarification, the smiley faces help.

In competition, a badminton match consists of three games and the player must when two of the three to win the match. The first player to reach 21 points wins the game. A quirky third-game rule states that players must switch sides of the court when one player reaches 11 points.
Points are awarded for server faults in a badminton game. Examples of faults include if the shuttle is hit twice from the server’s racquet, if the player’s foot touches the lines of the court, or the shuttle is caught in the net. There are other, more technical faults that can result in points for a server’s opponent. Pauses in the game are called lets and can occur for a variety of reasons.
For more information about badminton, the rules, equipment, proper grips, court dimensions, or the Ole Miss Badminton Club, visit the Badminton Club website.
If you plan to play badminton for exercise in the new future, be sure to use Self Magazine’s calorie calculator: https://www.self.com/calculatorsprograms/calculators/caloriesburned/badminton
– Kayleigh Skinner is a student in the Meek School of Journalism and New Media. She can be reached by emailing kaskinne@go.olemiss.edu.