For everything that happened in the world of sports on the Ole Miss campus on the week of March 24 – March 30, 2014.
Football
Chucky Mullins Award Banquet Scheduled for April 5


Ole Miss will celebrate the 25th anniversary of the Chucky Mullins Courage Award with a ceremony, presented by the M-Club, on Saturday, April 5. Tickets are now on sale at OleMissFB.com.
The Inn at Ole Miss will host the event with breakfast beginning at 8 a.m., followed by the ceremony emceed by the “Voice of the Rebels” David Kellum. The Grove Bowl present by Regions Bank kicks off at noon.
Many former winners will be in attendance. Special guests will include 1992 recipient Trea Southerland, who was a suite mate of Mullins, and 1996 recipient Derek Jones, who is currently an assistant coach for the Duke Blue Devils.
Tickets are $15 and can be purchased online at OleMissFB.com or by calling 1-888-REB-TKTS. Guests will receive a commemorative print celebrating the award’s 25th anniversary.
The Chucky Mullins Courage Award goes to an upperclass defensive football player  who will wear Mullins’ No. 38 jersey on the field during the 2014 football season.
The recipient, chosen by the Rebel football coaching staff, will also be recognized during on-field ceremonies at the Grove Bowl game.
In addition to the announcement of this year’s award winner, attendees will hear from head coach Hugh Freeze and see video highlights of many former award winners offering their reflections on Chucky Mullins and the significance of the honor.
Established in the spring of 1990 by the Phi Beta Sigma fraternity at Ole Miss, the Chucky Mullins Courage Award honors the late Chucky Mullins, who had his Rebel football career come to an end during the 1989 Homecoming game against Vanderbilt when he was paralyzed after making a tackle. After returning to his studies at Ole Miss, Mullins passed away on May 6, 1991.
Past recipients of the Chucky Mullins Courage Award include Chris Mitchell (1990), Jeff Carter (1991), Trea Southerland (1992), Johnny Dixon (1993), Alundis Brice (1994), Michael Lowery (1995), Derek Jones (1996), Nate Wayne (1997), Gary Thigpen (1998), Ronnie Heard (1999), Anthony Magee (2000), Kevin Thomas (2001), Lanier Goethie (2002), Jamil Northcutt (2003), Eric Oliver (2004), Kelvin Robinson (2005), Patrick Willis (2006), Jeremy Garrett (2007), Jamarca Sanford (2008), Marcus Tillman (2009), Kentrell Lockett (2010), Deterrian Shackelford (2011), Jason Jones (2012), and Mike Marry (2013).
Other events surrounding the Regions Bank Grove Bowl include the Rebels’ Choice Awards on Monday, March 31 at 7 p.m. at the Ford Center and Ole Miss Baseball hosting Auburn in a weekend series at Swayze Field. The track & field, women’s tennis and women’s golf teams will also be in action on campus that weekend.
[hr]
Track and Field

Ole Miss’ Robertson, Miller Earn SEC Weekly Honors
Ole Miss’ Ricky Robertson was named SEC Men’s Field Athlete of the Week and Jalen Miller was tabbed Men’s Freshman of the Week, the league office announced Tuesday.
Robertson and Miller helped lead the No. 12 Rebels to a strong outdoor season debut at the Ole Miss Open last weekend.
In his first meet since 2012 after redshirting last year, Robertson returned in good form by tying his own Ole Miss facility record in the high jump at 7-5 to easily claim the Ole Miss Open title. He had a couple of near misses at 7-7.25, which would have tied his personal best and school record from 2012. He also placed fifth in the long jump with a mark of 23-6.75.
The Hernando, Miss., native ranks No. 1 among NCAA and SEC high jumpers after the opening weekend of competition.
Miller made his collegiate outdoor debut a memorable one by winning the 100, 200 and 4×100-meter relay at the Rebels’ home meet. His winning time of 10.29 in the 100 was a personal best and ranks him No. 6 in the school record books, No. 6 in the NCAA and No. 3 in the SEC after the opening weekend of action.
The Tunica, Miss., native defeated a star-studded 100-meter field that included Olympian Isiah Young and All-American Mike Granger, among others. His time of 10.29 tops all freshmen nationally in the 100.
Miller also anchored the Rebels’ 4×100-meter unit to a winning time of 40.22 that ranks eighth in the nation and second in the SEC so far this year.
This was the eighth SEC weekly honor in Robertson’s illustrious collegiate career, while Miller receives his second SEC weekly award.
The duo will try to help Ole Miss achieve more success at this week’s Texas Relays before returning home for the April 5 Ole Miss Invitational.
Ole Miss Debuts At No. 12 In National Outdoor Track Poll
The preseason edition of the 2014 USTFCCCA national men’s track & field poll was released Tuesday, and Ole Miss is ranked 12th behind some of the nation’s top athletes in their respective events.
The Rebels, who placed eighth at last year’s NCAA Outdoor Championships, boast three men ranked as the top returners in their event nationally. Junior Sam Kendricks is No. 1 in the pole vault (school-record 19-0.75), senior Ricky Robertson is first in the high jump (school-record 7-7.25) and senior Phillip Young, a Florida State transfer, is tops in the triple jump (53-5.75).
Also ranked among the top 25 in their event are senior Mike Granger and freshman Jalen Miller in the 100 meters, the 4×100-meter relay squad, and Robertson in both the triple jump and long jump. The USTFCCCA preseason rankings are a prediction of where teams would finish at this year’s NCAA Championships based on current and past season results.
The Rebels actually kicked off their outdoor season last weekend with the Ole Miss Open. Kendricks and Robertson put on a show when they both posted facility-record marks in the pole vault and high jump, respectively. Sophomore Nathan Loe set a school record in the hammer throw (202-1), while Miller had a spectacular college outdoor debut with wins in the 100, 200 and 4×100 relay.
The Ole Miss men have now been ranked in 28 of 29 indoor and outdoor national polls during head coach Brian O’Neal’s tenure.
The 12th-ranked Rebels will compete at the Texas Relays this Wednesday-Saturday in Austin, before returning home for the April 5 Ole Miss Invitational.
[hr]
Men’s Tennis 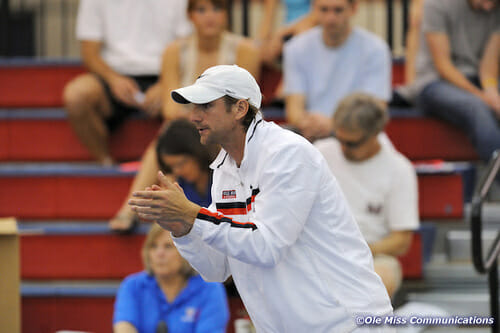 Rebels Sweep Jackson State 4-0
The Ole Miss men’s tennis team traveled down to the capital city Tuesday, and picked up three wins against Jackson State.  The Rebels (8-9) return to SEC play this weekend, as they welcome arch-rival Mississippi State Sunday at 1 p.m.
William Kallberg did not make the trip to Jackson, while he continues to nurse an ankle injury.  In the first match, the teams started with doubles. Johan Backstrom and Joe Rogers won 8-0 at No. 2, and then Stefan Lindmark and Zach Wilder won 8-2 at No. 3.
The Rebels earned straight set singles wins from Backstrom at No. 2, Nik Scholtz at No. 1 and Lindmark at No. 3 for the 4-0 victory.
For the second two matches, the Rebels and Tigers only played singles.  Lindmark sat out the second match, but the Rebels got wins from Scholtz at No. 1, Rogers at No. 6, Ricardo Jorge at No. 3 and Backstrom at No. 2 for the 4-0 victory.
Scholtz vaulted up to No. 16 in the latest ITA Singles Rankings released Tuesday, after consecutive top-15 wins. He is now 9-0 overall and 4-0 in the SEC at No. 1 singles heading into the State match.
Scholtz sat out the final match of the day.  Vinod Gowda was first off the court at No. 4 followed by Jorge at No. 3, Backstrom at No. 1, Lindmark at No. 2 and Rogers within seconds at No. 6 for the final 5-0 score.
The Rebels return home to start gearing up for the big match on Sunday against the No. 17 ranked Bulldogs.  It’s the Rebel Kid’s Club party as well as Sundae Sunday.  Fans will enjoy free ice cream sundaes between doubles and singles.
Follow the Rebels on Twitter, @OleMissMTennis and on Facebook at OleMissMTennis.
[hr]
Softball

Rebels Fall in Walk-off at UT-Martin
The Ole Miss softball team rallied out of a 2-0 deficit in the sixth inning Tuesday night to tie the game at UT Martin, but lost 3-2 in the seventh inning on a walk-off steal of home plate.
Ole Miss (19-15) outhit the Skyhawks 6-5 in the game. Junior pitcher Lauren Lindsey, starting her second game of the season, pitched a career-high 6.2 innings, allowing just one earned run and striking out three. Freshman left fielder Miranda Strother led Ole Miss at the plate by going 2-3 with one run scored.
UT Martin (14-15-1) opened the game with two runs in the first inning on back-to-back RBI doubles from pitcher Kenzi Tate and third baseman Stephanie Nidiffer to take a 2-0 lead.
Lindsey and the Rebels put the Skyhawks down in order the next two innings, but faced another threat in the fourth. With a runner on third base and just one out away, UT Martin hit a grounder to junior third baseman Allison Brown. Brown quickly threw home and senior catcher Marina Parra applied the tag beautifully to end the threat.
Ole Miss mounted its rally in the sixth, plating two runs on three hits. With the bases loaded and two outs away, junior right fielder Jamie Morgan showed great patience at the plate and earned the RBI walk, scoring redshirt-freshman second baseman Alyssa Invergo. Senior center fielder RT Cantillo then singled up the middle to score Strother and tie the game.
Then in the bottom of the seventh with two outs on the board, UT Martin second baseman Taylor Manning stole home to win the game. It was the sixth straight game between Ole Miss and UT Martin that has been decided by one run. Ole Miss won the two team’s first meeting this season 3-2 at the Ole Miss Softball Complex.
Ole Miss will play again Friday when it takes on South Carolina in a Southeastern Conference road series in Columbia, S.C. Friday’s game will begin at 5 p.m. CT, Saturday’s game is at 1 p.m. CT and first pitch for the series finale Sunday is scheduled for 12 p.m. CT.
For all Ole Miss softball news and information, go to OleMissSports.com and follow the Rebels on Twitter at @OleMissSoftball and on Facebook at Ole Miss Softball.
— Ole Miss Sports Information
[hr]
Events going on this weekend:
Baseball
The No. 9 Ole Miss baseball team travels to Tuscallusa, Ala this weekend to take on the Alabama Crimson Tide in a three game series. The Rebels look to bounce back from a 5-3 loss to Southern Miss on Tuesday night. A full weekend preview of the series will be on HottyToddy.com on Friday.
Games times are:
Friday: 6:30p.m.
Saturday: 6:00p.m.
Sunday: 1:00p.m.
Softball
The Ole Miss softball team takes on the South Carolina Gamecocks in Columbia S.C. The squad is looking for their second conceptive series win.
Game Times are:
Friday: 5:00p.m.
Saturday: 1:00p.m.
Sunday: 12:00p.m.
— Adam Brown, Sports Editor of HottyToddy.com, adam.brown@hottytoddy.com
Facebook
Twitter
Pinterest
Previous articleOxford House Tour — The Roberts Neilson Home Built in 1870
Next articleThe Daily Crime Report for March 27