For everything that happened in the world of sports on the Ole Miss campus during the week of April 7 – 13, 2014.
Softball
Ole Miss Splits Doubleheader at SELA

Ole Miss freshman volleyball player Aubrey Edie has been selected to train and compete with the U.S. Collegiate National Team, as announced by USA Volleyball Tuesday.
Edie (Fayetteville, Ark.) is among 36 athletes selected by USA Volleyball to participate in the U.S. Collegiate National Team (CNT) program that will train and compete in conjunction with the USA Volleyball Girls’ Junior National Championships from June 22 to July 1 in Minneapolis.
Athletes participating on the U.S. Women’s Collegiate National Team were selected from the U.S. Women’s National Team Open Tryouts held Feb. 21-23 at the U.S. Olympic Training Center in Colorado Springs, Colo.  Edie was one of 248 athletes from 106 colleges and universities to participate in the tryouts.
“The Ole Miss volleyball team is excited for Aubrey,” head coach Steven McRoberts said.  “It takes a lot of hard work and talent to make this squad. We are looking forward to supporting Aubrey in any way that we can in order for her to be successful as she represents Ole Miss on the U.S. Collegiate National Team.”
The 2014 CNT program includes nine middle blockers, nine outside hitters, six opposites, six setters and six liberos.
After the training portion of the program, the 36 athletes will be divided into three equal teams which will compete in a round-robin event June 27-30. The round-robin event may add an international team to increase the field to four teams that would complete June 26-30. This program is considered a second tryout for the U.S. Women’s National Team.
Edie averaged a team-high 9.21 assists per set in 2013, the eighth best mark in the SEC and tops among freshmen in the league. She had a team-high eight double-doubles in all matches, tied for the second most in the SEC among rookies, and her six double-doubles in SEC play was the second most among freshmen. Edie broke the Ole Miss single-match program record with 61 assists vs. LSU, and also had a team-high and season-high tying 16 digs en route to earning SEC Freshman of the Week honors.
–Ole Miss Sports Information
Rebel Road Trip
Oxford Hosts BancorpSouth Rebel Road Trip Meeting 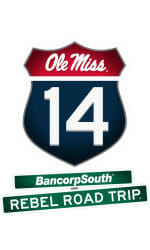