May 13, 2014
43
3936
Commentary by Dick Gentry
There are dozens of tall tales about John Wilkes Booth’s escape after assassinating President Lincoln and fleeing to far-flung parts of the world: England. India. Texas. Oklahoma. Tupelo.
Tupelo? Well, Guntown, which is about 15 or 20 miles north of Tupelo. I first read about this story in the Tupelo Daily Journal in 1995 by the late columnist Phyllis Harper. She had interviewed Emma Emily Epting Pressey, who told her that JWB was buried in the old Smith Cemetery in Guntown.
I was heavily engaged in other projects in other parts of the country at the time and barely paid attention to the initial story.
The old Smith Cemetery in Guntown is the site where most of my long-lost relatives are buried. I was taken to that cemetery 70 years ago by family members on cleanup days. If any one of my close, older relatives had survived, they could enlighten me about the JWB legend Harper wrote about. But his name was never mentioned in my family.
Emma Pressey told columnist Harper that her grandfather, Dr. John Fletcher Booth, was a cousin of JWB who had sheltered the assassin in his Guntown home after the murder of Lincoln and that, in a closely guarded secret, JWB lived out his days upstairs in Dr. Booth’s home. When he died, he was interred in Smith Cemetery.  I remember visiting the cemetery and Dr. John Fletcher Booth’s home in Guntown as a child.
The legend was that Emma Pressey’s mother, Jennie Booth Epting, was the “little girl who helped carry food to JWB in his upstairs hiding place” at Dr. Fletcher Booth’s home. (This burned to the ground a decade ago). A few abstract memories began to stir several years ago. One was a childhood memory of a well on the porch of the big two-story house in Guntown.  It was, of course, Dr. John Fletcher Booth’s home.
About a dozen or so years ago, during a rare trip to Tupelo, I took my wife Martha on a quick tour to see if I could locate the cemetery.  I quickly located the larger Cambelltown Cemetery in Guntown where other relatives are buried.  A short distance from the Cambeltown Cemetery I eventually found the Smith Cemetery tucked away from the road in a cow pasture.  As Martha and I walked around the tombstones, I saw one for “John Wilkes Booth.”

My now deceased cousin David Smith from Memphis once asked me for a donation to support a fence around the Smith Cemetery to protect it from the pastured cows, but I never made one. David died a few years before I began my JWB search. I suppose my lack of seriousness about the JWB headstone could be the same one that others must feel when they first see it:  big joke.  After all, JWB is buried in Baltimore in an unmarked grave. Right?
More years passed. I found and reread Phyllis Harper’s interview with Emma Pressey. She told Harper about a gold cufflink belonging to JWB. One link was buried with him in his grave; the other was in the possession of a relative in Jackson, Mississippi. I then wanted to interview Emma Pressey, but she died in 1988.
I had a box of unread documents about my family. About three years ago, I took that information and subscribed to Ancestry.com. I started with my grandfather, George Washington Booth Smith, who died in 1922. His name always intrigued me. It took me a year to find out where my brother Roy and I belonged in this clan. We were both embarrassed about how little we knew of our ancestors.
Emma Pressey was my second cousin. The family knew her as “Aunt Em.” I must have known her. Dr. John Fletcher Booth married twice. His first wife was Nancy Jane Smith. When she died, he married her cousin, Emily Gambrell. Both of his spouses were my great, grand aunts. The woman with the cufflink is related to me through her husband, a deceased third cousin. I drove to Jackson, met her, held the cufflink, and discovered there are other relatives who know about the headstone. Without exception, they believe JWB is buried in the Smith Cemetery.
HOW IS THIS POSSIBLE?
In order for JWB to accomplish a successful escape, he had to elude the federal troops who caught him at Garrets’ Farm. History tells us he was surrounded and fatally shot in a burning barn by a federal trooper. Was it not JWB? He had to receive assistance on his journey to Mississippi, and the body from the barn was identified by many who knew him. The biggest mystery was the Guntown connection.  How could he end up there? 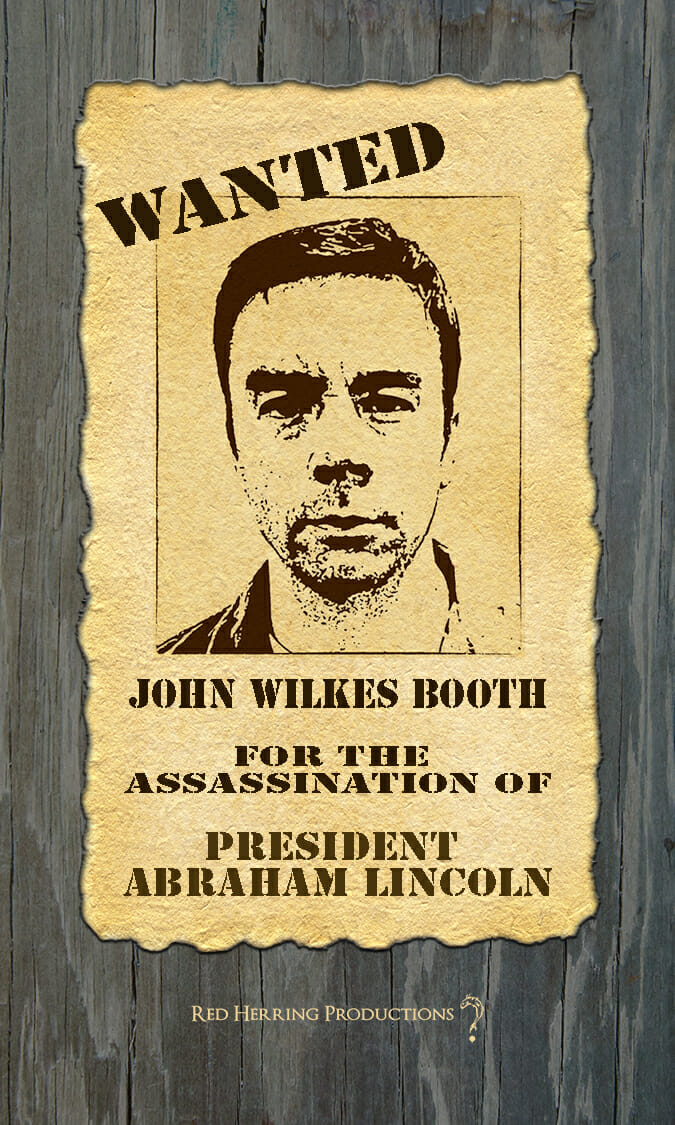 Legends say Booth escaped with the assistance of Dr. Fletcher Booth and a wealthy planter friend, Col. Robert Gordon, from Pontotoc, Mississippi.  Dr. Booth and Gordon were officers in the Confederate Army and research tells me the two men knew each other, and JWB. Col. Gordon, a Mississippi legend, is the builder of Lochinvar in Pontotoc, today registered on the list of National Historical Homes. Gordon purportedly attended a meeting in Canada of conspirators who wanted Lincoln dead. JWB was present.
THERE IS A WAY TO SOLVE THIS MYSTERY
Ed Colimore, a writer with the Philadelphia Inquirer, has personal interests in the case and has followed it for years. I saw his byline on a related article online and contacted him. He opened the door to a wealth of information about the Yankee-Booth connection.
Colimore said two Booth experts, Joanne Hulme of Philadelphia, a great-great-great niece of Booth’s sister, and Maryland educator and historian Nate Orowek, had joined the Baltimore family in the mid-1990s in an action to exhume the body buried in Baltimore’s Green Mount Cemetery for a DNA sample. They hoped to compare it with three of JWB’s’ cervical vertebrae stored at the National Museum of Health and Medicine in Washington. The case was denied by the courts.
Strangely, in 2013 the Army also rejected an appeal to compare the DNA of John Wilkes Booth’s vertebrae to that of his famous brother, actor Edwin Booth. Conspiracy theories might have been put to rest about JWB’s body.
Colimore reported that an Army spokesperson responded to U.S. Rep. Chris Hollen (D.-Md.), who assisted with the submission of the request, “Although the results might be intriguing, and the temptation to exploit emerging technologies is strong, the need to preserve these bones for future generations compels us to decline the destructive tests.” Tests on the tissue also taken from Booth were considered too deteriorated to be of scientific value.

Joanne Hulme told the Inquirer: “…this is beyond disappointing. I’m angry. I would like to know who’s buried in the family plot. This never ends. I may take it to my grave, but I will take it kicking and screaming.”
I contacted Joanne Hulme and Nate Orowek, possibly the best living sources who could someday solve the riddle. Since there is a remote possibility that Joanne and I are distant cousins, I felt comfortable seeking her aid. We talked for almost an hour. I also corresponded with Nate Orowek, who Colimore told me was an expert who has been investigating this for more than 40 years.
Orowek informed me that he had heard of the Guntown escape story, but he believes the body is buried in Enid, Oklahoma. Joanne Hulme believes Booth escaped to India. She also believes the body from the burning barn was not Booth’s. In fact, she’s convinced of it. She even told me whose body she believes it was. (I disclose this in my book). Others contend the body was mummified and exhibited around the country until the remains were lost. I believe the following excerpt from my book is the only place you will read the following curiosity:
THE MISSING MUMMY
Those who contend JWB died in Enid, Oklahoma believe his embalmed body remained unburied in an undertaker’s care for eight years. The undertaker, William Penniman, displayed it in a chair in his funeral home’s window. About 10,000 people were said to have viewed it.
When no one claimed it, showman Finis Langdon Bates acquired the mummified body and stored it in his garage in Memphis. He then displayed it in circus sideshows until after WWI. In 1920, Bates rented the body to carnival promoter William Evans, who paid Bates several hundred dollars a month to display it. As far as I could determine, the mummy was passed around and last seen in the late 1970s. I did discover an enigmatic twist to the tale.
Records claim Finis Langdon Bates was born in 1848 on a plantation in Itawamba County, Mississippi. He studied law in Carrollton, Mississippi and moved to Texas. After his first wife died, he returned to Memphis where he died on November 3, 1923 at age 75. One of his descendants is Kathleen Doyle Bates, better known as actress Kathy Bates.
During my quest, I discovered a pre-Civil War map of Northeast Mississippi. My home turf, Lee County, was not yet named. Everything from Verona to Van Buren to Tupelo to Fulton was at the time in huge Itawamba County, which included Guntown. I don’t think Booth’s body was ever in Oklahoma, and when I discovered that the birthplace of Finis Langdon Bates was Guntown, it seemed too much of a coincidence to completely ignore. Is this a clue in solving the mystery?

According to Charlie Booth of Fulton—the  knowledgeable Booth relative who directed me to Jackson, Mississippi and the mysterious gold cufflink in a bank vault there—he knows Bates was born in Itawamba County and also recalls hearing that  Guntown was the site where lawyer and circus promoter William Evans was born.
In concluding this chapter about the cemetery in my book, I interviewed Tommy Palmer, the man who in 1988 placed the JWB tombstone in the Smith Cemetery. He was following the instructions of “Cousin Em,” who asked him to place the stone after her death. Before he erected it, he took metal rods to locate the unmarked grave. He told me that he found a metal casket buried about four and a half feet deep. He placed the stone as requested.
There is no room to include all of the details about this legend and mystery here, but more are spelled out in in the final chapter of my book, UNDER FIRE AT OLE MISS @ Amazon.com.

Dick Gentry was the Summer Editor of The Daily Mississippian prior to the 1962 riot at Ole Miss. He left Ole Miss shortly after and later graduated with a degree in journalism and business from Eastern Washington University in Spokane, where he was a writer for the Spokane Daily Chronicle.

He lives in a small mountain town about 50 miles north of Atlanta with his wife and fellow traveler of 54 years, Martha. UNDER FIRE AT OLE MISS is his second book about a Mississippian’s unusual career. His first is AT THE FOOT OF THE SOUTHERN CROSS, the story of a naïve reporter who became editor and publisher of the only newspaper in The Cayman Islands during the rise of the offshore tax-haven industry. Both are available at Amazon.com.