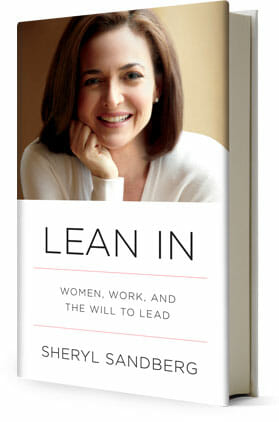 It has been two weeks since finishing “Lean In: Women, Work, and the Will to Lead” by Sheryl Sandberg, and I still talk about it to anyone who will listen.
Sheryl Sandberg is the current COO of Facebook.
I find the gender studies Sandberg presents fascinating. For example, a Harvard Business School case study that is based on Heidi Roizen was changed slightly to judge reactions based on gender. Roizen is a venture capitalist described as using her “outgoing personality…and vast personal and professional network [that] included many of the most powerful business leaders in the technology” to build her success.
In 2003, two professors took this case study and gave it to their students as two separate case studies. Students were handed the exact case study with either Heidi or Howard being the one difference. They were then asked to rate their impressions of the two.
The good news is that the students found them both to be competent workers, but that is where it ends. Howard is a person they want to hang out with after work. They can see themselves having a beer or even going on a weekend fishing trip with Howard. Heidi, not so much. She seems a little egotistical and not really a team player.
The research clearly showed, “success and likability are positively correlated for men and negatively correlated for women. When a man is successful he is liked by both men and women. When a woman is successful, people of both genders like her less. This truth is both shocking and unsurprising: shocking because no one would ever admit to stereotyping on the basis of gender and unsurprising because clearly we do.”
As late as 2012, “Science Faculty’s Subtle Gender Biases Favor Male Students” by Corinne A. Moss-Racusin states, “when evaluating identical resumes for a lab manager position from a male student and a female student, scientists of both sexes gave better marks to the male applicant. Even though the students had the same qualifications and experience, the scientists deemed the female student less competent.”
“Lean In” is based on a 2006 TED talk that Sandberg gave titled, “Why we have too few Women Leaders.” Start with this 15 minute presentation that is chocked to the gills with discuss(able) points and then pick the book up and prepare to be wowed. If it helps, I picked it up as a skeptic myself.