June 4, 2014
0
415
Senior catcher Will Allen has been named one of three finalists for the Johnny Bench Award honoring the nation’s top collegiate catcher it was announced by the Greater Wichita Sports Commission on Tuesday.
It marks the second consecutive year for Ole Miss to have a player named a finalist for the award as Stuart Turner was named the 2013 Bench Award winner a year ago.
Allen has helped lead the Rebels to a 44-18 record on the year and has Ole Miss as one of the last 16 teams playing at this point of the season heading into an NCAA Super Regional at sixth-seeded Louisiana-Lafayette this weekend.
Ole Miss claimed the Southeastern Conference Western Division this season and finished second in the SEC overall standings with a 19-11 mark after being picked to finish sixth in the league as Allen is one of several players to step up to the challenge this season.
Allen is also a semifinalist for the Olson Award, which is presented to the breakout player of the year in college baseball, and the Dick Howser Trophy, which is presented to the NCBWA Player of the Year.
The senior is hitting at a .351 clip on the season and has tallied 59 RBI for the year. He has also added 29 extra-base hits, including 22 doubles and seven home runs. Defensively, he is fielding at a .995 clip with only two errors this season behind the plate and only five passed balls.
Allen entered the NCAA Tournament second in the SEC in batting average, second in RBI, second in hits, fourth in slugging percentage, tied for first in doubles and ninth in home runs. It’s a tremendous jump up from his junior season when he tallied four home runs and 23 RBI, leading to his recognition as a part of the initial Olson Award watch list and subsequent selection as a semifinalist.
The senior delivered big performances throughout the season for Ole Miss, earning SEC Player of the Week honors the opening weekend after hitting .545 for the series and belting out a pair of home runs. Allen also hit a walk-off home run in the 10th inning to secure a win and help set up a sweep of UCF. He also delivered big home runs to help the Rebels sweep No. 17 Kentucky on the road.
This past weekend in the NCAA Oxford Regional, Allen scored the game-tying run in the fifth inning and the go-ahead run in the 10th inning against Washington to push the Rebels into an NCAA Super Regional for the fifth time in the last nine NCAA Tournament appearances. 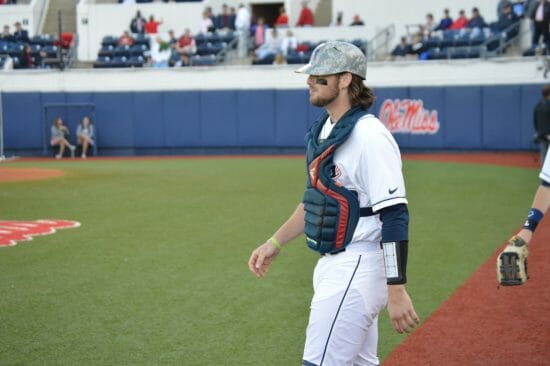