The Mississippi Delta is one of the most under-appreciated places in the state. It is so full of history and yet now lies in ruins in some parts. These places beg for their stories to be told and their histories known to the world.
Hushpuckena, Miss.
Hushpuckena is a small community of abandoned buildings tucked away behind a patch of trees and brush along Highway 61 north of Shelby. A few old buildings dot the landscape, the most notable being an old general store with the doors left wide open almost beckoning in passersby. Old miscellanea is the highlight of the inside, with old clothing seemingly dumped on the counters, overturned armchairs, and piles upon piles of medical records from Bolivar County Hospital in the 1980s, the patients once seen by a now retired Dr. Eugene Tibbs. The outside of the building has a badly faded R.C. Tibbs & Sons sign, hinting at what perhaps was a family business that was abandoned as the doctor left his records in a mess throughout the store. The building immediately next door is an empty shell of what may have been a home at one point, but it will remain a mystery as the forest has claimed this now locked structure. 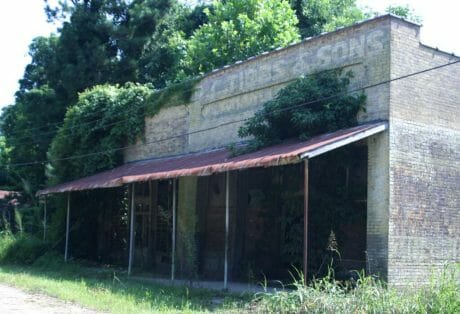 Mount Holly (Greenville, Miss.)
Alongside the Mississippi River runs Highway 1, one of the older highways in the state. About 20 miles south of Greenville is Mount Holly, a gorgeous Italianate mansion not even 200 yards from the edge of Lake Washington. Completed around 1856, it was based on a drawing published by Calvert Vaux—the same one used for Oxford’s Ammadelle. There was considerable deterioration on the brickwork and outer structures, and a step inside revealed too much debris and broken glass to proceed too far in safely. Two grand floor-to-ceiling mirrors were both shattered and random litter suggested that the mansion had been ransacked at least somewhat recently. From its grandeur and intricate detailing, it was obvious that whoever this house once belonged to was fabulously wealthy for the time period and spared no expense to construct one luxurious home. 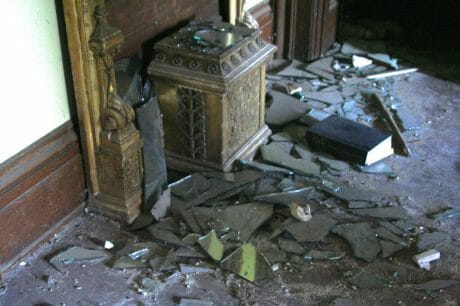 Round Barn (Chatham, Miss.)
Along the upper side of Lake Washington, also just off Highway 1, is the town of Chatham. Being so close to the lake, the town has a large fishing and camping community. Less than a mile from the lake, however, sits an unusual round barn that really stands out from the side of the road. The barn actually has 16 sides and therefore 16 internal compartments that local farmers would each use to store their cotton seeds in the early 1900s. Several abandoned houses sat nearby, crumbling in disrepair, but the real treat were four donkeys and a horse fenced in next to the barn. They were quite friendly animals and even stopped to take pictures next to the historic building. The round barn in Chatham is listed on the preliminary list of local attractions called 101 Mississippi Places to See Before You Die published by a blog dedicated to the preservation of historical places in Mississippi.

Arcola, Miss.
Arcola is a typical specimen of the Mississippi Delta town—few inhabitants, maybe one or two restaurants, plenty of abandoned buildings. Just south of Leland, Arcola seemed to have more places out of business than in business, since the only eatery to be seen was a fried chicken joint inside a gas station. As of the last census, Arcola had a population of less than 400 people, and this was not surprising as whole strips of road were just one abandoned building next to another. On the main highway, there was a boarded up building next to an old grocery store, and down the road from that was a seedy old lounge. If a few new places were to open in Arcola, perhaps it would have a chance to become the beautiful Delta town it once was. 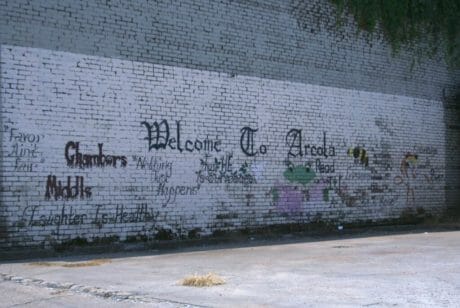 Vaughan, Miss.
Perhaps the most well-known town of these is Vaughan, just off I-55, the site of the famed train wreck of railroad engineer Casey Jones in 1900. All that’s left of Vaughan now is a few buildings downtown close to the old railroad tracks and what was once a depot that served as the Casey Jones Museum. (Jones’ hometown of Jackson, Tenn., and the town of Water Valley, Miss., have their own Casey Jones Museums.) Both abandoned buildings have now been all but taken over by vines and trees, and getting inside either of them might prove impossible. The larger building is no longer structurally sound, as the roof has caved in, leaving nothing but peeling paint and old wooden boards. The loss of such an important piece of Mississippi history is truly saddening.

Nitta Yuma, Miss.
Nitta Yuma and its surrounding areas are steeped in rich Mississippi history. Nitta Yuma itself is now somewhat of a tourist attraction, drawing people from all over to see its preserved community of abandoned buildings. A home with an old truck, a renovated church, and an antique gas station are only a few of the things to see in Nitta Yuma. The Henry Vick House, whose owner belonged to the family who founded the city of Vicksburg, was the site of an episode of the Syfy television show Deep South Paranormal in 2013. A few miles down the road from Nitta Yuma is Rolling Fork, where blues musician Muddy Waters claimed to have been born. And even farther south is the tiny Onward, Mississippi, where President Theodore Roosevelt refused to shoot a captive bear on a hunting trip in 1902, prompting the creation of the now famous “teddy bear.”

– Cherry Mathis is a staff writer for HottyToddy.com and can be reached at cnmathis@go.olemiss.edu.