Making a Case for Charlie Conerly's Hall of Fame Induction

Ray Guy finally goes into the Pro Football Hall of Fame this weekend, which is a good thing. He is deserving. His induction is long overdue. 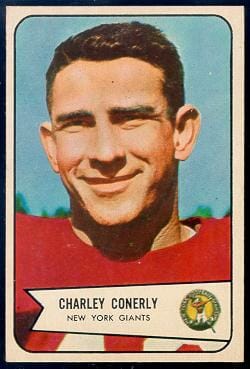 The Seniors Committee of the Pro Football Hall of Fame meets again this weekend to select two more old-timers who have been bypassed in the past. They can correct another wrong. The question isn’t so much whether or not the late Charlie Conerly should be in the Pro Football Hall of Fame.
That’s a no-brainer.
The question is: How have so many people screwed up for so long that he isn’t?
Conerly isn’t, you know. He’s in college football’s Hall of Fame. He’s in the Mississippi Sports Hall of Fame and the Ole Miss Hall of Fame. But some how, for some reason, he has never been enshrined with the greatest legends of pro football at Canton, Ohio.
He was the NFL’s Rookie of the Year in 1948. He was a three-time All Pro quarterback. He guided a team to the NFL championship game three times and was a winner once.
He was the league’s MVP once. He was both valiant and brilliant as the losing quarterback in the greatest NFL game of all-time, the one generally credited with bringing pro football to the forefront in American sport. Conerly had already been voted the game’s MVP before Johnny Unitas led that famed comeback and overtime Baltimore victory.
But Charlie was more than that. He had a remarkable aura about him that transcended sport. He was a World War II hero. Ruggedly handsome, he was the original Marlboro Man, and he was to New York football what Joe DiMaggio was to New York baseball.
Over the years, I have campaigned for Conerly — as I did with Guy. I have talked to some of the nation’s most respected sports writers, all of whom have served on the Hall of Fame selection committee at one time or another. Some are gone now.
“You mean Charlie Conerly isn’t already in the Hall of Fame,” said the late Furman Bisher of the Atlanta Journal-Constitution. “I would have assumed that he was. There’s no doubt he should be. There are lesser players who are.”
“You gotta be kidding me,” said Peter Finney of the Times Picayune in New Orleans. “How in the world could Chunkin’ Charlie Conerly have slipped the cracks?”
“Yes, I know he’s not in, and it’s a shame,” said Dave Anderson, Pulitzer Prize-winning columnist of the New York Times. “As I’ve written in the past, he’s the best quarterback who’s not in the Hall of Fame and he’s better than some who are.
“I remember the first year he was eligible he came up one or two votes short of being elected. It’s a shame.”
I ran into the late, great Jim Murray, the Pulitzer Prize-winning Los Angeles Times columnist at the Super Bowl years ago and will never forget Murray’s consternation when he learned that Conerly wasn’t in the Pro Football Hall of Fame. “If Charlie’s not in the Hall of Fame, they might as well not have one,” Murray said.
When Conerly’s New York Giants teammate Frank Gifford was inducted, he said in his acceptance speech that he was embarrassed to be a member of the Hall of Fame when Charlie Conerly wasn’t.
The primary criteria for Hall of Fame induction is supposedly for the player to have been one of the elite players at his position during his era.
Conerly qualifies.
My rule of thumb for a player’s Hall of Fame worthiness: Could the history of the NFL be written without his inclusion in the text? With Conerly, the answer is: No.
As Mike Lupica of the New York Daily News wrote at the time of Conerly’s death in 1996: “Charlie Conerly was the quarterback of the ’50s.”
Come on Seniors Committee, it’s time to make this right.
Rick Cleveland rcleveland@msfame.com is the executive director of the Mississippi Sports Hall of Fame and Museum.