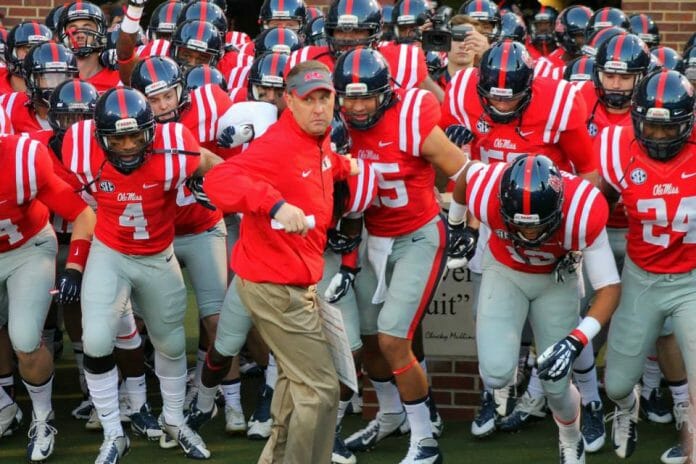 Rebels entering the Vaught. / Photo by Seph Anderson
As fall envelopes Oxford and the color of the trees transform from green to to brown and orange, the Rebels welcome in the University of Tennessee Volunteers for homecoming at Ole Miss.
For Ole Miss alumni, students and fans, a Saturday spent in the Grove is a special time. Everyone gathers under the big oak trees to await the traditional Walk of Champions prior to kick-off. Great times spent on campus and in Oxford are toasted and cherished.
Rebels returning home for this special celebration will savor their time together and share countless memories — but then it’s game time!
Let’s be honest — in past years, the homecoming game was almost always against a sure-thing beatable foe. That’s not the case in 2014, as we all know any SEC matchup  will be hotly contested.
This battle against the Vols should be a huge motivator for the Rebels. With a win at homecoming,  Ole Miss could become bowl-eligible in the middle of October before moving into Death Valley the next weekend to face the LSU Tigers.
Tennessee probably will be rolling into Oxford under second-year Head Coach Butch Jones. In his first season, Jones led the Vols to a 5-7 overall record, 2-6 in the SEC.

Key defenders for Tennessee this season are senior linebacker AJ Johnson, an All-SEC selection; Curt Maggitt, back from an ACL injury; and Cam Sutton a freshman All-American cornerback last season. The Vols will replace all four starters on the defensive line from last season.

The last time the Rebels and Vols met in Oxford was back in 2009, when the Rebels defeated Tennessee by the score of 42-17. Dexter McCluster stole the show that day with huge runs and touchdowns.

The Vols will probably come into Oxford with a record of 4-2., anticipating Tennessee losses to Oklahoma and Georgia.

Ole Miss should have no problem moving the ball on the Tennessee’s inexperienced defense. Expect a productive ground game and big-play passing offense for the Rebels as they out-talent the Vols on their way to their sixth win of the season.

That sets up Coach Hugh Freeze and the Rebs for their third straight bow appearance. This year, however, the goal is really the expanded college football playoffs.

–Adam Brown, HottyToddy.com sports editor, can be contacted at adam.brown@hottytoddy.com.