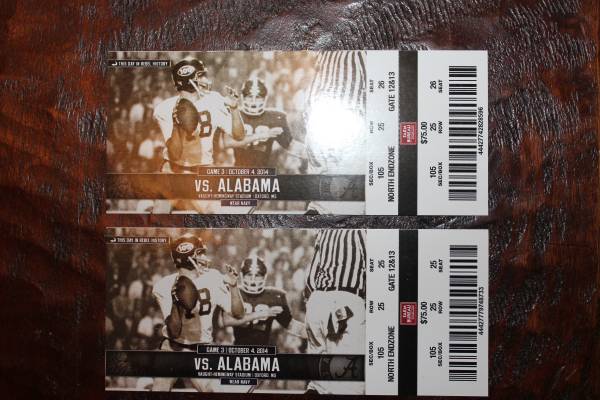 With the Ole Miss vs. Alabama game fast approaching, tickets are in high demand and many people are willing to pay four figures just to get tickets to the big game and a place to stay in Oxford.
The success of each team with Ole Miss No. 11 and Alabama No. 3 in the nation according to the AP Poll plus their longtime divisional rivalry has many traveling to participate in the festivities, including College GameDay, which is driving up ticket prices tremendously. For the first time in history, ESPN’s College GameDay will be visiting the University of Mississippi for the first time since the show’s inception in 1987, and people want a piece of the action.

If you have already purchased tickets, count your blessings because tickets are not cheap. Tickets from the Ole Miss Ticket Office are completely sold out so if you are in need, websites like StubHub, CheapTickets or Craigslist are the only available options.
If you do not mind sitting with Alabama fans screaming “Roll Tide Roll” for hours on end, you can expect to pay $199.75 for the North End Zone section 105. If you would like to sit with the friendly faces of Ole Miss fans in Section R, you will be paying around $297 per ticket. Those who would like to have a great view of the action in Sideline E, Row 18 will be paying a whopping $1,760 for just one ticket.
However, that’s not the worst. The most expensive ticket we could find came on StubHub for a whopping $2,696 in the upper north end zone, section 112, and that doesn’t include shipping. Also the most perplexing ticket price we found on StubHub is one ticket for $11,707.96 for Lot 9, Row GA.
Even student tickets are hard to come by. Ole Miss Students are selling their preloaded tickets on their student IDs to anyone who will buy them at prices from $150-185.
With the Rebels first division match-up and the biggest game Ole Miss has seen in decades in less than a week, the anticipation will be driven up as high as the ticket prices until the clock strikes 0 at the end of the fourth quarter.
Lindsey Andrews is a HottyToddy.com staff reporter and can be reached at lnandre1@go.olemiss.edu.