October 2, 2014
0
406
Ole Miss and The National Football Foundation (NFF) & College Hall of Fame announced Wednesday that they will jointly honor Wesley Walls with an NFF Hall of Fame On-Campus Salute, presented by Fidelity Investments, this Saturday in Oxford during the game between No. 11 Ole Miss and No. 1 Alabama. Coverage of the game will start at 2:30 p.m. CT on CBS.
“I was ecstatic, with a little bit of emotion as well,” Walls told the Oxford Citizen after the announcement in May. “I was excited and just proud. I’m just so proud to be an Ole Miss Rebel and to join eight guys, eight players or coaches from the University of Mississippi, that are in the Hall of Fame. To be along those guys is such an honor.”
The NFF Hall of Fame On-Campus Salute program is a hallowed tradition that began with the inaugural class in 1951, and to this day the salutes remain the first of numerous activities in each inductee’s Hall of Fame experience. During the NFF Hall of Fame On-Campus Salutes, each inductee returns to his alma mater to accept a Hall of Fame plaque that will remain on permanent display at the institution. The events take place on the field during a home game, and many inductees cite the experience as the ultimate capstone to their careers, providing them one more chance to take the field and hear the crowd roar their name.
During his acclaimed career at Ole Miss from 1985-88, Walls earned First Team All-America honors his senior season at tight end while also being recognized as an NFF National Scholar-Athlete.
“Wesley Walls was a tireless worker both on the field and in the classroom at Ole Miss,” said NFF President and CEO Steve Hatchell. “An incredible two-way player, he also excelled as an NFF National Scholar-Athlete. We are thrilled to honor him in front of the Mississippi faithful at Vaught–Hemingway Stadium.”
After playing strictly as a defensive end his first three seasons in Oxford, the 1988 team captain transformed into a two-way player his senior year as a tight end. Walls amassed 36 receptions for 426 yards and three touchdowns at tight end en route to earning AP First-Team All-America and All-SEC honors. As a defensive end, he recorded 140 career tackles, including 19.5 tackles for loss and 5.5 sacks, and he led the Rebels to a win in the 1986 Independence Bowl. An Academic All-America and three-time academic all-conference selection, Walls was chosen as a member of the 1980s All-SEC Team and honored as an SEC Legend in 2007.
Chosen by the San Francisco 49ers in the second round of the 1989 NFL Draft, Walls enjoyed a decorated 15 seasons in the NFL, helping the 49ers win Super Bowl XXIV during his rookie campaign. A five-time Pro Bowl selection and three-time All-Pro selection, he played for the New Orleans Saints, Green Bay Packers and Carolina Panthers.
The Pontotoc, Mississippi, native currently works as a real estate developer, and he serves as president and CEO of Delta Furniture Manufacturing. Active in the community, he endowed a football scholarship at Ole Miss, and he was inducted into the Ole Miss Sports Hall of Fame in 2005 and the Independence Bowl Hall of Honor in 2001.
Walls becomes the eighth Rebel player to be inducted, joining Charlie Conerly (1942, 1946-47), Charlie Flowers (1957-59), Jake Gibbs (1958-60), Parker Hall (1936-38), Bruiser Kinard (1935-37), Archie Manning (1968-70) and Barney Poole (1942, 1947-48). Former Ole Miss coach Johnny Vaught (1947-73) is also enshrined in the Hall, as well as former Rebel players Thad “Pie” Vann (as a coach) and Doug Kenna (as a player at Army).
Including the 2014 class, only 948 players and 207 coaches have been inducted into the College Football Hall of Fame from the nearly 5.06 million people who have played or coached the game over the past 146 years. In other words, only two ten-thousandths of one percent (.0002) of those who have set foot on the gridiron have earned the distinction. Click here for a complete list of players and coaches in the Hall.
The 2014 College Football Hall of Fame Class will be officially inducted at the 57th NFF Annual Awards Dinner, held at New York City’s historic Waldorf Astoria Hotel on Tuesday, Dec. 9. This year’s College Football Hall of Fame Class includes: Dre Bly (DB, North Carolina), Tony Boselli (OT, Southern California), Dave Butz (DT, Purdue), Shane Conlan (LB, Penn State), Joe Hamilton (QB, Georgia Tech), John Huard (LB, Maine), Darrin Nelson (HB, Stanford), Willie Roaf (OL, Louisiana Tech), John Sciarra (QB, UCLA), Sterling Sharpe (WR, South Carolina), Leonard Smith (CB, McNeese State), the late Derrick Thomas (LB, Alabama), LaDainian Tomlinson (TB, TCU), Wesley Walls (TE, Mississippi), and coaches Mike Bellotti (Chico State [Calif.], Oregon) and Jerry Moore (North Texas, Texas Tech and Appalachian State). For more information, please contact Will Rudd at wrudd@footballfoundation.com or by calling 972.556.1000. 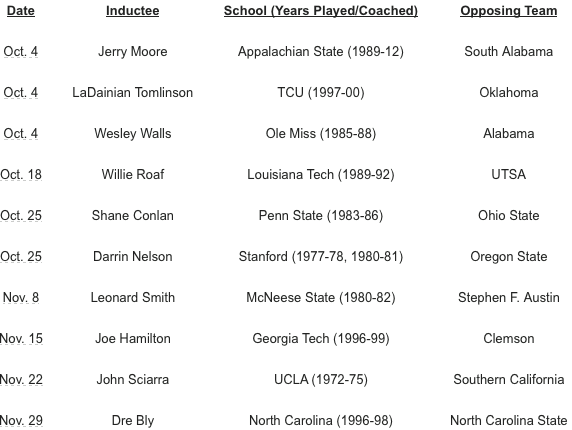 The 2014 season marks the fifth season that Fidelity Investments, a leading provider of not-for-profit workplace retirement savings plans to higher education employees, is serving as the national presenting sponsor of the NFF Hall of Fame On-Campus Salutes. The salutes are one component of a multi-year initiative between the two organizations to celebrate the scholar-athlete ideal and a joint commitment to higher education. At the start of the 2014 season, Fidelity became the presenting sponsor of the William V. Campbell Trophy, college football’s premier scholar-athlete award, which is celebrating its 25th Anniversary in 2014. Other highlights of the sponsorship include Fidelity becoming the first presenting sponsor of the organization’s prestigious NFF National Scholar-Athlete Awards and helping launch the NFF Faculty Salutes Initiative, which recognizes the contributions of the faculty athletics representatives around the country.
Follow Ole Miss Football on Twitter (@OleMissFB) and Facebook (Facebook.com/OleMissFootball), in addition to www.OleMissSports.com.