Camurati: Magnolia State Shares in Celebration of No. 1, 3 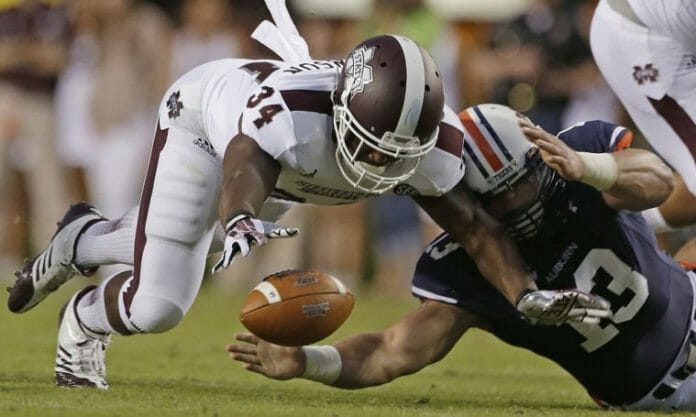 It was a historic weekend for college football in Mississippi — Ole Miss defeated two Top 25 teams in back-to-back weeks and Mississippi State was ranked No. 1 in the AP Poll, both firsts for the respective programs.
Since the polls were released Sunday afternoon, a lot of State fans have taken to the social media sphere, calling out the Rebels for our jealousy.
Are we jealous? Damn right we are. But do (most of us) think you deserve it? It’s hard to admit, but we really do.
We are Southeastern Conference rivals, but we both belong to a bigger family of Mississippians. And what are Mississippians known for? Our friendly nature. Our compassion. Our familial spirit. We want to beat you as badly as you want to beat us at the end of the season, but we have to support each other to an extent.
For the Bulldogs, it all started with Southern Miss, which wasn’t an unexpected win so people didn’t think much of it. UAB gave the Bulldogs a little trouble, but they pulled out a 47-34 win. South Alabama wasn’t a problem, either, only managing a field goal against the Psycho Defense.
But that was non-conference. Most SEC schools go into conference play undefeated. It’s our friends and neighbors that ruin records.
Mississippi State destroyed a then-ranked LSU team who looked flabbergasted at the events unfolding on the field. Then, they welcomed Texas A&M into Starkville and just all-out thrashed them until they got tired and stopped wailing on the Aggies in the end. This weekend, they scored three unanswered touchdowns against No. 2 Auburn in nine minutes.
Auburn’s response during that run? Two plays, two turnovers. Though the game got more interesting, there was never much question that the Bulldogs had the win in the bag.
Ole Miss has decisively beaten its six competitors this season as well, with its closest margin of victory being the 23-17 Alabama win, but we haven’t done the same kind of raw damage to top-ranked teams. Not yet, at least.


As much as it pains the Ole Miss faithful to admit, Mississippi State is good, and their leader Dak Prescott has an amazing chance at the Heisman this year. And, oddly enough, we don’t hate it.
The main reason Ole Miss can celebrate in State’s successes is that the Bulldog victories in no way diminish the Rebels’ stellar 6-0 season. It’s not a celebration of one over the other; it’s a singular celebration in the name of Mississippi football and enjoying the success of two programs who have often been at the bottom of the conference.
The schools shared space on the cover of Sports Illustrated after the Alabama/A&M wins weekend after College GameDay set up shop in Oxford for the weekend, and SEC Nation visited Starkville. There are six undefeated schools left in college football, and two of them call Mississippi home.
In the past, the Bulldogs and the Rebels have been looked at as throwaway games, usually practice to prep for the bigger Alabamas, LSUs and Floridas. This year, we’re the threat, and neither of our fan bases knows how to handle this much pressure and exuberance.
Both programs are in uncharted territory for the majority of the fanbase because while the Rebels were winning championships 60-plus years ago, many of us weren’t alive to experience those good ol’ days.
Now, it’s here. It’s Mississippi’s time to shine, and both SEC schools are in the national spotlight for our pluses instead of our mishaps. It’s not about our past; it’s not about our Southern quirks; it’s about the strength of faith in Mississippi football and the passion of teams to thrive in an environment of strong competition.
For years, we have supported our faltering Mississippi teams with unwavering support. I’ve stood in Vaught-Hemingway stadium in the pouring rain to watch the Tigers, the Tide, the Gators and so many others thump Ole Miss. The Bulldog legion has rung those awful cowbells for hours on end, just to see a loss.
But we Mississippians supported. And we cared. And we screamed. And we didn’t abandon our family.
Coach Hugh Freeze came into the floundering Ole Miss program a few years ago with the faith and determination to recruit the heck out of the country and bring the talent to the University of Mississippi. He held fast to his inspiring speeches, no-nonsense attitude and clean mouth, and Freeze whipped the Rebels into the best defense in the nation and a team who continues to break records.
Mississippi State’s coach Dan Mullen has done the same in Starkville, continuing to believe in his players even when the hard losses and almost wins inevitably broke Bulldog hearts. He was openly emotional after the win Saturday, commenting that he never gave up on his players and is thankful to see the hard work pay off for the team now.
In the end, the polls are the polls, and as much as we want to cling to those beautiful single-digit numbers, they’re subjective. We can compare every minute detail of the Rebels and the Bulldogs based on who we’ve played and who we haven’t, but when it comes down to it, the only comparison that matters is the final score of the highly touted Egg Bowl on Nov. 28.
So, to all the Bulldogs out there: We congratulate you, your football program and your school. You keep beating up everyone you encounter, and we’ll do the same. See you after Thanksgiving.
And don’t worry — our Landsharks will still be hungry.
Amelia Camurati is managing editor of HottyToddy.com and can be reached at amelia.camurati@hottytoddy.com.
Facebook
Twitter
Pinterest
Previous article
College GameDay Visits Starkville, Twitter Revolts
Next article
SEC Power Rankings — Week 7 With Ole Miss, State, 1-2