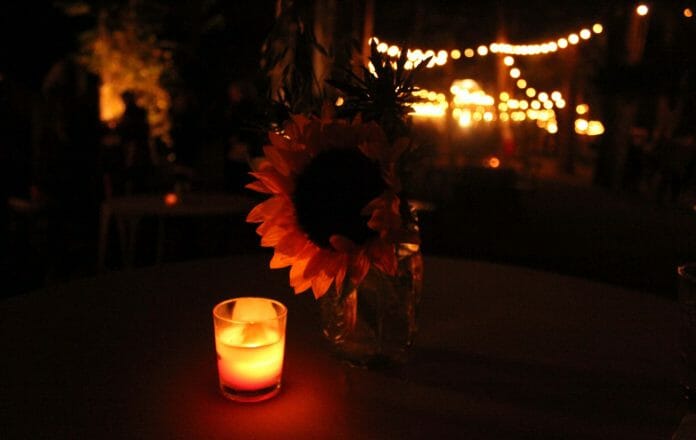 It was a true October night: a bite in the air, occasional crunch under foot and flickering lights in trees. Last of wild sunflowers bent towards lit candles on tables, illuminating softly around William Faulkner’s Rowan Oak. Music flowed in the air and cocktails were in hand as warm caramelized ham beckoned from the long wooden tables. It was the University Museum’s third annual Harvest Supper, its largest fundraiser.
The profits from the glowing event go to many aspects of the museum: the “Conversations” series, exhibitions and educational programming and special events. The supper also raise awareness about the ongoing need to maintain Rowan Oak, one of two historic properties the museum overlooks.


There was a small brown hut with a server who works with Cathead Vodka who provided the refreshments. The server poured the punch: apple cider, ginger beer and Maker’s Mark bourbon. He popped a honey straw in the cocktail, saying to give a few stirs to let the honey permeate its sweetness.
An hour later the quiet land was bustling with tweed coats and warm welcomes as people from the university, employee, student and alumni, and the Oxonian as well as Mississippians and those who love them.
Blake Tartt III, an Ole Miss graduate who still helps his university as the President of the Business School’s Real Estate Advisory Board, said, “This is an all Mississippian event.” Tartt flew in a plane from Houston to Oxford to attend the Supper that night – he helped fund the Harvest Supper. He then motioned to follow: “There are ESPN people here.” He soon shook hands with Brad Nessler and Todd Blackledge of ESPN as they all greeted Ross Bjork, UM’s Athletics Director, at his table.

Holly Rowe, well-known sports sideline reporter, was all-smiles at the Supper. She said, “Oxford is definitely an interesting, cozy little town.”
The crowd hushed a bit when the silent auction took place. A painting by Robert Malone called “Untitled,” started at $2,500 (despite its initial price in the gallery at $3000). A lady held the painting as she walked among the crowd so the diners could peer at it. The final bid: $4,750.
Malone appeared from the side yards during the bidding and talked about how his work was experimental. He thanked the auctioners for taking interest and disappeared back under the tree lights, perhaps to enjoy his meal of pork loins and fall salads grown by the nearby Woodson Ridge Farms.
Artists Jason Bouldin and Bill Dunlap also had their paintings auctioned off soon after.

The music added a romantic tint to the supper. University of Mississippi Steel Orchestra played with its echoes vibrating in the slightly damp air, their red and blue drums shining under the lights. Then Dent May arrived right as the folks began gathering dishes and crooned amid the bustling. And The Echo played too and their music made a welcoming to the still-arriving party-goers at the Harvest Supper.

Dorothy Howorth, president of Friends of UM Museum, said, “This year was spectacular. It exceeded all expectation. Friends of the Museum with the staff made this one of the beautiful events in the fall. The level of sponsorship support makes this a really worthwhile endeavor. It cements the relationship between the university and the town.”
Some fireflies began settling down as the supper attendees began walking home, some loading on one of several trolleys waiting just outside of Rowan Oak. Their stomachs were full and warm from the food and drinks and merrymaking. It was a good night.

[dhr]
Callie Daniels is the staff reporter for HottyToddy.com You can contact her about this story at callie.daniels@hottytoddy.com.
Facebook
Twitter
Pinterest
Previous articleOPD Lays Out Traffic Plans For Tennessee Game
Next articleMore than a Simple Twist of Fate: Ole Miss vs. Tennessee