Bulldogs Visit Crimson Tide in SEC Game of the Week 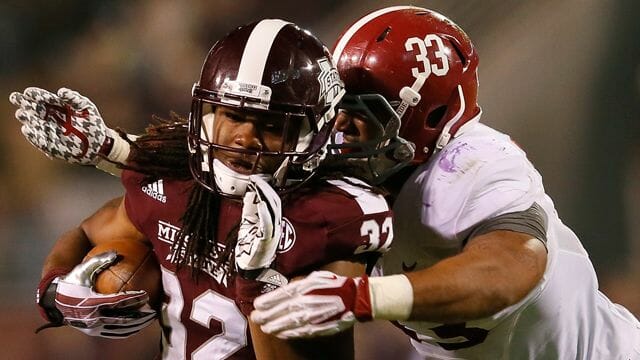 This weekend, the Ole Miss Rebels are away from action as they prepare for a trip up to Fayetteville next Saturday to take on the Arkansas Razorbacks, but despite the absence of one Mississippi school, there is a very key matchup for the Mississippi State Bulldogs as they face the Alabama Crimson Tide in Tuscaloosa.
Kick off is set for 2:30 p.m. on CBS.
Mississippi State is sitting at 9-0 on the season after a 45-16 win over Tennessee Martin on homecoming, and Alabama is 8-1 with a loss to Ole Miss.
This rivalry between the Mississippi State and Alabama is separated by a short drive across Highway 82. Earlier this week, coach Dan Mullen discussed how his squad is preparing for this weekend matchup.
“We have had really good energy the last couple of weeks of practice,” Mullen said. “It is a long season and these are young kids. These guys have been going at it since the start of camp. I think you want that energy to stay high. In a game like this, the energy is going to be high all week at practice. This is a game our guys have been looking forward to.”
The Bulldogs have excelled on both sides of the ball this season and have to continue going into Bryant-Deny Stadium. Coach Mullins is 0-5 against the Tide with Dak Prescott orchestrating the offensive the Bulldogs have a good chance to come out of Alabama with a win.
Alabama is coming in off of a very emotional overtime win against the Tigers in Death Valley. The Crimson Tide at home is and has always been a very dominant team, with Blake Sims at QB and a top notch wide out in Amari Cooper that can give any defense trouble.
The Tide have been rolling since their only loss against the Ole Miss Rebels with the offense fire power that offensive coordinator Lane Kiffin has brought into T town.
For the Bulldogs, Dak Prescott has led the way as a quarterback with high numbers both in passing and rushing. The Psycho defense of Mississippi State is also one of the better defenses in the country and has caused a number of problems for Texas A&M, LSU and Auburn so far this season.
Adam Brown is HottyToddy.com sports editor and can be reached at adam.brown@hottytoddy.com.