The Final Buzzer: Saying Goodbye to the Tad Pad 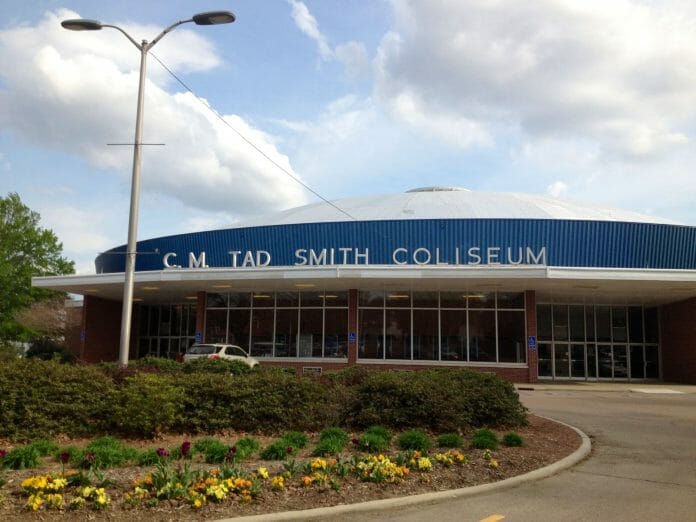 The University of Mississippi’s athletic facilities are expanding as every program continues to excel in the Southeastern Conference, and the next big project on the list is an upgrade for the men’s and women’s basketball teams.
These squads will play one last season at Tad Smith Coliseum, affectionately known as the Tad Pad, before moving into the Ole Miss Pavilion, under construction now next to Vaught-Hemingway Stadium, to be complete by December of 2015.


The Tad Pad opened in 1966 as the Rebel Coliseum, but six years later in 1972, Ole Miss renamed the basketball arena after C.M. “Tad” Smith, a former three-sport letterman, coach, and athletic director at the university.
Throughout the years, the Tad Pad has housed great match-ups against conference and non-conference foes as home base during some great seasons. The Rebels (men) have won the SEC Western Division five times in 1997, 1998, 2001, 2007, and 2010, and Ole Miss has seen seven NCAA tournament appearances in 1981, 1997, 1998, 2001, 2002, and 2013. The Rebels also have two SEC Tournament Championships from 1981 and 2013.
Among the memorable players who have taken the court at the Tad Pad in a Rebel uniform are Clarence Sanders, Sean Tuohy, Keith Carter, Michael White, Zach Graham, Anthony Boone, Johnny Newman, and Ansu Sesay.
In the late ’90s, the Ole Miss team featuring White, Carter, Boone, and Jason Smith dominated the SEC West, hanging banners for division crowns in back-to-back seasons in ’97 and ’98.

On January 11, 1997 the Rebels welcomed the No. 3-ranked Kentucky Wildcats into Oxford. Ole Miss then pulled of the upset, beating the defending national champions 73-69, snapping Kentucky’s 14-game win streak and propelling the Rebels to their first top 25 ranking in school history. The win pushed the Rebs to No. 20 in the AP poll and began a unprecedented Rebel run of six straight postseason appearances and back-to-back SEC Western Division championships.
On senior day in 1998, Ole Miss hosted the Auburn Tigers, and before the game, the team honored the seniors like the always do, but this was a little different with the retirement of Boone’s No. 41 jersey. The Rebels defeated the Tigers by the score of 74-67. Coach Rob Evans and his squad received a No. 4 seed in the NCAA tournament and faced Valparaiso in the first round of the dance in Oklahoma City. In the final 2.5 seconds of the game Ole Miss led 69-67 . Valpo’s Bryce Drew hit a three-pointer as the clock hit zeros, ending the ’98 run.
Under the direction of coach Rod Barnes, the Rebels advanced all the way to the Sweet Sixteen of the NCAA March Madness. After winning the third Western Division crown, they were defeated by the No. 2 seed Arizona Wildcats 66-56.
More recently, in 2011, Ole Miss took on a Top 10 Kentucky team in the middle of a rare blizzard in Oxford. In the final seconds of the game, guard Chris Warren hit his 300th three-pointer of his college career and defeated the Wildcats 71-69 in a stunning last-second win in the Tad Pad.

Coach Andy Kennedy has been with the Rebels since 2006 and has led the team to 170 wins in eight seasons, including a 21-13 season to tie for first in the SEC West in his opening season and a 27-9 year in 2012-13 to make it to the third round of the NCAA tournament.
The women’s basketball program began in 1974 and has been a fixture at post-season tournaments ever since.
The Lady Rebels have appeared in the NCAA tournament 17 times, including the inaugural 1982 tournament straight through to 1992 and again in 1994, 1995, 1996, 2004, 2005 and 2007. They have reached the Sweet Sixteen eight times and the Elite Eight five times. Entering the 2008 season, the program has an all-time win-loss record of 686-353 for a 66 percent average.
The 1992 team won the SEC with an 11-0 conference record and finished the season with a final record of 29-3, the most wins in team history.
Even though the Tad Pad is a very small arena, the atmosphere has been electric for many games and a tough environment for opposing teams. Much like football games, the students rally together and give Ole Miss undying encouragement. The memories of big wins and hard losses will forever linger when reminiscing about matches at the Tad Pad, but the Rebel basketball teams are ready to make new memories in the new arena next year.
Adam Brown is sports editor of HottyToddy.com and can be reached at adam.brown@hottytoddy.com.
Facebook
Twitter
Pinterest
Previous articleVassallo: Saturday's Televised SEC Trifecta
Next articleBite Your Tongue: The Taco Shop's Popularity Owed to Fresh Offerings