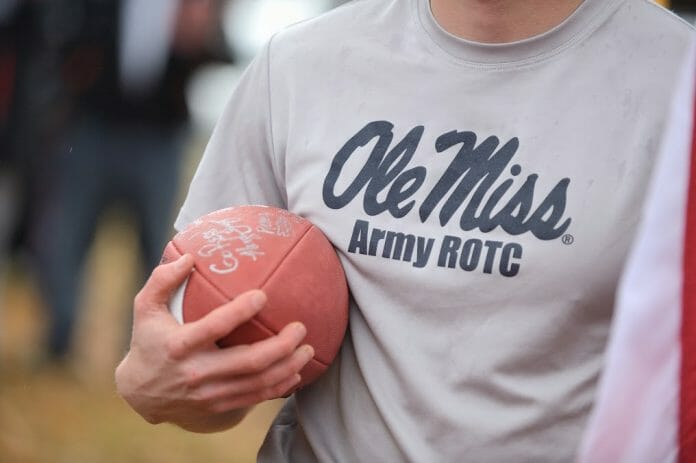 Last year, the Ole Miss and Mississippi State ROTC programs began an Egg Bowl tradition to unite the two schools in one shared event — a trek from Starkville to Oxford on foot, carrying the football to be used in the big game.

 The second annual Egg Bowl Run will take place on Monday, Nov. 24. Beginning this run, ROTC cadets from Mississippi State will start in Starkville carrying Saturday’s game ball. They will continue approximately 50 miles north to meet the Ole Miss Rebels in Calhoun City around noon.
Once there, Laura Edwards, the council for Calhoun City will host a short ceremony on the town square. Last year, the event brought over 300 people to the city to show their school spirit. This year, they hope to bring in even more fans with an activity center for kids and an appearance by Rebel the Bear. The ROTC cadets invite fans to celebrate with them in Calhoun City or show their support from anywhere along the route. 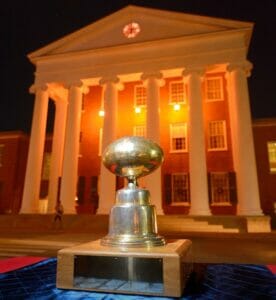 The run from Calhoun City back Oxford will begin after the ceremony and cadets should reach the Lyceum to hand the game ball off to coach Hugh Freeze around 6 or 7 p.m. The run will take place from Highway 9 to Highway 7 and then down University Avenue. The ROTC crew would like to apologize in advance for any traffic they will cause and ask that you do your best to cheer them on watch for them bringing home the ball.
Due to the fact that this run takes place over a holiday, many cadets will not be participating in the run. Only 30 members will be running in this year’s Egg Bowl Run. It takes a lot of sacrifice to stay back and be a part of this great new tradition, but Master Sgt. Matt Hayes knew it was worth it when he started the run in 2013.
“I started this tradition last year and wanted to start a new tradition for cadets,” Hayes said. “When I told people at first they thought I was crazy, but with the help from the university, MDOT, Ryan W, Ross Bjork and countless people, the event was a huge success last year and will only grow every year.”

Fans are encouraged to show their support in any way that they can. If you can’t make it out to cheer on the ROTC on Monday, you can still track the entire race online at myathlete.com. It will be active Saturday and go live early Monday morning.
Hayes has also set up a website with Ignite Ole Miss to give fans the opportunity to win some awesome game day gifts. The ROTC departments at Ole Miss rely on fundraising to finance much of what they do. With the help of donations, fans can win things like signed football pylons, the US flag from the stadium, the opportunity to join the football team and Rebel Battalion Cadets on the Walk of Champions or a chance to shoot the cannon at the Egg Bowl. In addition, fans will be eligible to have their name chosen to win the game ball from Saturday’s game.
 Rachel Vanderford is a HottyToddy.com staff reporter and can be reached at rmvander@go.olemiss.edu.