The History of the Golden Egg 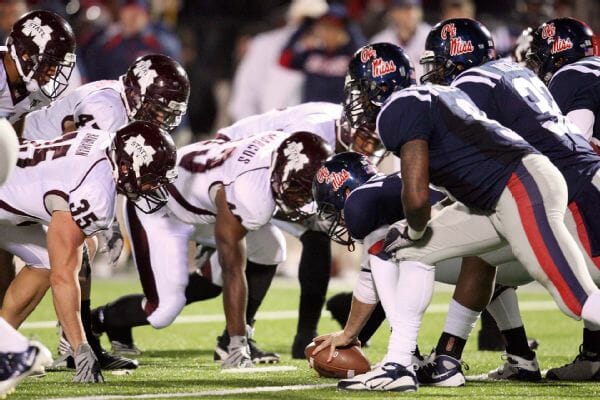 In the Magnolia State, there is one game destined for the record books every year, no matter how well both teams are playing, known as the Egg Bowl, matching the Mississippi State Bulldogs against the Ole Miss Rebels.
The two teams lay it all on the line for pride and statewide bragging rights to be the owners of the Golden Egg trophy for the next 364 days. This year, the teams meet in Oxford for a 2:30 p.m. kickoff on CBS, stealing the thunder from Alabama and Auburn in the Iron Bowl a state away.
This series dates all the way back to the first game in 1901 and the trophy was introduced in the 1927 game after a group of fans prompted the purchase of a football-shaped trophy to be awarded to the winner of the game and kept on their campus until the game was played again the following year.
Saturday afternoon will be the 87th renewal of the battle for the Golden Egg, and over the last five meetings, the Bulldogs have defeated the Rebels four out of five games.
After Ole Miss shutout State 45-0 in the 2008 Egg Bowl in Oxford, Mississippi State fired Sylvester Croom and hired Dan Mullen to come in and change the program.
He started by focusing on the matchup with the Rebels as he installed a countdown clock in the Bulldog locker room counting down the minutes and seconds until the next Egg Bowl.
MSU entered Mullen’s first game with a 4-7 record against an Ole Miss squad that was already bowl eligible and No. 20 in the nation. Running back Anthony Dixon ran for 133 yards and a touchdown while quarterback Chris Relf also ran for 131 yards and a touchdown and completed two touchdown passes in a 41-27 win in Starkville.
The Bulldogs would also not lose to Ole Miss in the next two games in 2010 and 2011.
Ole Miss defeated the Bulldogs in 2012 in coach Hugh Freeze’s first season in Oxford 41-24 to become bowl eligible.
Last season, the Egg Bowl made history as the first to ever go into overtime, ending 17-10 with a Mississippi State touchdown as Dak Prescott came in from off the bench to led the Bulldogs to victory.
Adam Brown is HottyToddy.com sports editor and can be reached at adam.brown@hottytoddy.com.