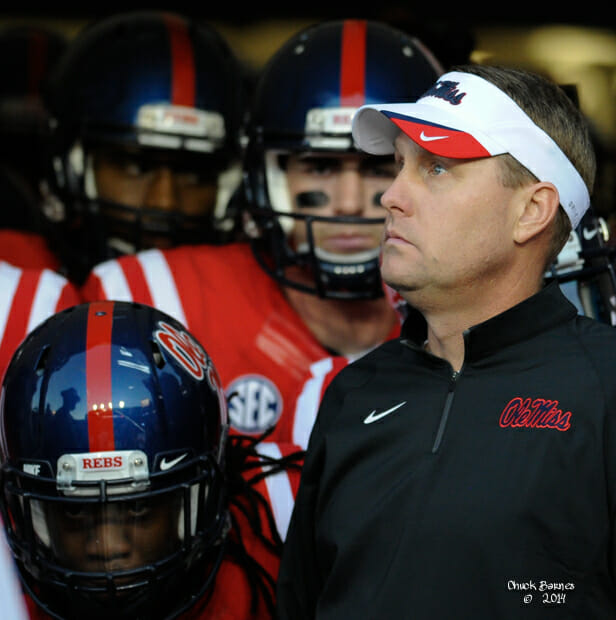 After becoming the first Rebel coach to open his tenure with three straight bowl appearances, Ole Miss has finalized salary increases for head coach Hugh Freeze and his staff, as announced Friday by Athletics Director Ross Bjork.
Ole Miss is also investing in its football program with an expansion of Vaught-Hemingway Stadium as part of the Forward Together campaign. Those plans, including visuals and timelines, will be unveiled Monday at 10 a.m. CT in a public announcement at the Burns Team Room in the Manning Center. A press conference for the Chick-fil-A Peach Bowl will follow.
“This continued investment in Ole Miss Football, Hugh Freeze and our football staff shows that we want to excel at the highest level in the SEC and college football,” Bjork said. “I personally look forward to working with Hugh Freeze as we continue to build Ole Miss each and every day. We are grateful that his leadership of our program will be in place for the long term.”
“Coach Freeze has done an extraordinary job on the football field, but just as important is his role as mentor and leader for our student-athletes and role model for all of us,” said Ole Miss Chancellor Dan Jones. “I am grateful to Athletic Director Ross Bjork for his leadership in this important relationship and to Coach Freeze for his long-term commitment to Ole Miss.”
After guiding the Rebels to a 9-3 regular season and a “New Year’s Six” bowl, Freeze’s contract has been extended by one year to the maximum four years allowed by the state of Mississippi, and his base salary will rise from $3.15 million to $4.3 million. His base salary will increase by $100,000 per year or 50 percent of the annual bonuses earned in the previous season, whichever is greater.
Freeze’ base salary increases to $5 million if the Rebels advance to the SEC Championship game. Other incentives are based on APR, playoff rankings, postseason participation and coaching honors.
In addition, the salary pool for the Ole Miss football staff will increase by at least 25 percent.
“I’m grateful to call Oxford my home, and I’m excited to continue our journey for championships at Ole Miss,” Freeze said. “From day one, I have admired and appreciated the leadership and support that Dr. Jones, Ross and our administration provide this program. Our staff has done a tremendous job, and I’m particularly excited about their salary increases.”
“Coach Freeze and his family are a perfect fit for Ole Miss and our football program, and we are excited he will continue to be our head football coach for a long time,” Bjork said. “In three short years, his value-added leadership style has brought newfound energy to our entire university, because he cares about the young men in our program beyond the football field. He also gives back to the greater Ole Miss community in so many ways, and he is a teacher of life lessons each and every day.”
The salary commitments and stadium expansion come on the heels of an $11.25 million renovation and expansion of the Manning Center. Projects included the Grill at 1810 (a full-service dining facility), the Williams-Reed Football Foyer, Burns team meeting room, VanDevender Family locker room, weight room, player lounge and visuals throughout the complex.