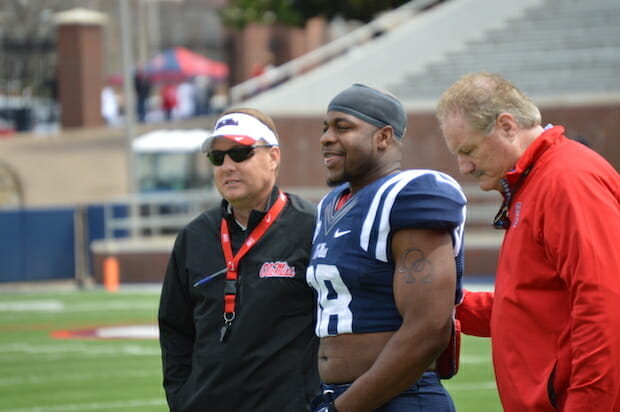 Allstate Insurance Company and the AFCA made the announcement during the Home Depot College Football Awards on ESPN.
The Allstate AFCA Good Works Team®, one of the most prestigious honors in college football, recognizes players at all levels of the sport for their inspiring acts of service and commitment to helping others. Shackelford was unveiled as the fifth team captain named in the 23-year history of the Allstate AFCA Good Works Team® determined by college football fan voters on ESPN.com/Allstate.
“While many might know Deterrian as the starting linebacker for one of the top-ranked defenses in college football, his positive contributions extend far beyond the football field,” said Jim Haskins, president of Allstate’s West Territory and a member of the 2014 Allstate AFCA Good Works Team® voting panel. “It is dedicated student-athletes like Deterrian who set an example for future generations, and Allstate is thrilled to see Good Works Team captain added to his long list of achievements.”
When he’s not making tackles on the gridiron, Shackelford is making a difference in the community with visits to the Blair E. Batson Hospital for Children to spend time with patients and their families. Earning a master’s degree in higher education this summer, the Decatur, Alabama, native also dedicates his time to mentoring local high school students, volunteering at nursing homes and distributing groceries at the Oxford Food Pantry. Determined to make a global impact, Shackelford has also helped lead mission trips abroad to Haiti and Panama. It’s because of these and a long list of other achievements that have made Shackelford the first-ever two-time winner of the Chucky Mullins Courage Award, which goes to the Rebels’ most deserving defensive player each year.
Shackelford and his fellow Allstate AFCA Good Works Team® members have been invited to New Orleans to participate in a special youth football clinic prior to the 2015 College Football Playoff Semifinal at the Allstate® Sugar Bowl® where they will be honored on-the-field at halftime during the nationally televised broadcast on Jan. 1, 2015.
The Allstate AFCA Good Works Team® is comprised of 22 players, including 11 competing in the NCAA® Football Bowl Subdivision and 11 players representing the NCAA® Football Championship Subdivision, Divisions II, III and the NAIA.
To learn more about this year’s team members and their charitable achievements, fans can visit ESPN.com /Allstate.
About the Allstate AFCA Good Works Team
The Allstate AFCA Good Works Teams® were established in 1992 by the College Football Association, recognizing the extra efforts made by college football players and student support staff off the field.  AFCA became the governing body of the award in 1997 and continues to honor college football players who go the extra mile for those in need.  Allstate worked to present the award starting with the 2008 season.
The SEC leads all conferences with 62 selections to the Good Works Team® since it began in 1992. The SEC is followed by the Big 12 Conference with 42 selections and the Atlantic Coast Conference with 29 selections. Super Bowl XLII, XLVI and XLI champion quarterbacks Eli and Peyton Manning were members of the 2002 and 1997 Good Works Teams®, respectively.
About AFCA
The AFCA was founded in 1922 and currently has more than 11,000 members around the world ranging from the high school level to the professional ranks. According to its constitution, the AFCA was formed, in part, to “maintain the highest possible standards in football and in the coaching profession” and to “provide a forum for the discussion and study of all matters pertaining to football.”
Follow Ole Miss Football on Twitter @OleMissFB, Facebook, in addition to OleMissSports.com.
Courtesy of Ole Miss Sports Information