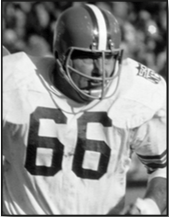 Gene Hickerson, considered by many the greatest pulling guard in NFL history, reached the ultimate of a football career when he was inducted into the Pro Football Hall of Fame in Canton, Ohio, in 2007. Just over a year later, on Oct. 20, 2008, Hickerson passed away at age 73.
The Atwood, Tenn., native came to Ole Miss and developed into one of the John Vaught era’s most prominent linemen. Hickerson was a star fullback in high school, but Vaught had other plans for him at Ole Miss. It was not unusual for Vaught and his staff to move players from their high school position to another position for college. He was an All-American, All-Southeastern Conference, and All- South tackle in 1957.
He played in both the Chicago All-Star Game and the Senior Bowl in 1958. Hickerson was named to the Sugar Bowl’s all-time team for the era 1955-62. He was named to the Ole Miss Team of the Century in 1993.
Playing for the Cleveland Browns his entire pro career, from 1958-73, Hickerson was named All-Pro in 1966 and all three seasons 1968-70. He was named the Outstanding Blocker in the NFL in 1968 and made the Pro Bowl every season from 1966-71.
In 1964 the Browns won the NFL Championship. Hickerson played in 11 divisional playoffs and five NFL championship games. Playing offensive guard for the Browns, Hickerson led the way for some of the game’s most prolific runners, such as Jim Brown and Leroy Kelly. He paved the way for Brown, Kelly, and Bobby Mitchell into the Hall of Fame.
Asked what he had learned in his years as Brown’s understudy, Kelly responded, “I learned to follow Gene Hickerson’s butt everywhere he goes.” The athletic Hickerson was noted not only for his punishing blocking but also for his speed and quickness, qualities rarely found in a lineman.