December 28, 2014
0
428
As most of us were unwinding from the Christmas craziness, coach Hugh Freeze and the Rebs made their way Atlanta to begin the gauntlet of events and preparations leading to the extravaganza that is Chick-fil-A Peach Bowl New Year’s Eve at the Georgia Dome.
On Friday, the head coaches and a few selected players from Ole Miss and TCU gathered for the opening press conference. Here are some of the highlights from Freeze and Evan Engram speaking on the mental and physical dream of the Rebs leading up to their match up with Horned Frogs. 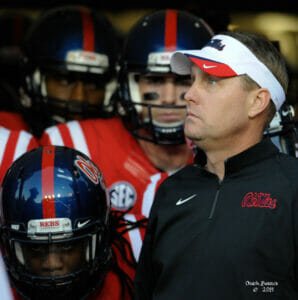 Freeze on Rebs and TCU from opening press conference in Atlanta
On bowl season momentum “That’s always an interesting concern we coaches have because of the off-time it’s almost like you’re starting over again. You’re never quite sure what that means for each individual on the team. I think playing an opponent of the quality of TCU in one of the New Year Six helps hold the attention.”
On being back in Atlanta “Last year we started in Nashville and ended in Nashville with two wins, so maybe that’s a good sign we can finish where we started this year in the same fashion. It would be a tremendous win against what I consider to be a top program this year and would certainly give us a lot of momentum going into the off-season and into next season.”
On Coach Patterson “We’ll have our first function where we’ll be together at the welcome party at the College Football Hall of Fame. I’ve text with him, several times and I asked him if he could you possibly give us a Christmas gift of just staying in one base look the entire time on defense. He didn’t agree to do that, he thought it was funny though.” “I’ve known of Gary for a while and when I was at Arkansas State we actually talked and there were a couple of guys that were on his staff that had interest in joining me there.”
On playing against Coach Patterson “I’ve never enjoyed playing my friends but if there is a time to do it, it’s in the bowl season, particularly in a New Year’s Six Bowl like the Chick-fil-A Peach Bowl.” “When the game starts the friendship get put aside and you’re battling for your kids, your university and your program.
On the TCU offense “It’s very good schematically to begin with but then you add the players, in particular the receivers and quarterback, and it’s just very difficult to stop.”
On what has prepared them to play TCU “Playing in the SEC. You are not going to put TCU on film and be unaware of their talent at every position because you’ve seen that throughout the SEC West grind. That doesn’t mean that we’ve played better teams because as a team this TCU team is really good.”
Coach Freeze is clearly ready to take care of business and all jokes aside this will not be a cake walk for either team. It is evident that the Rebels are hoping to continue that balance mentally and physically to finish the season on strong note and continue to show the exceptional growth of a team that has triumphed in the face of adversity. This will also serve as a benchmark for future recruiting for,the arena as they continue to solidified next years recruiting class in a few short weeks.
Now we al know coaches are at the forefront of leading their team to meet the challenges of all magnitudes each day. It seems as if it is a constant Ferris wheel that never really ends on many facets.
Not only are the coaches forced to maintain a positive mental and physical balances in times like these but the players themselves will face a great deal of challenges as an individual and team.
Tight end Evan Engram on the Rebels 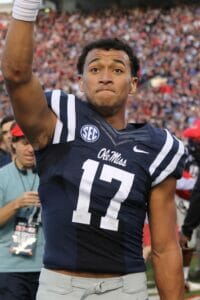 On playing in the Georgia Dome “It feels good to be home. It’s a great atmosphere. It’s where the SEC championship is played, so it has an SEC feel.
On TCU’s defense “Defensively they play fast athletic guys on that side of the ball. They have a lot of good defensive ends and athletic linebackers.”
On the game matchup “I think if we can finish with a solid running game, that will help us. Having a running game will obviously open up a passing game. I think we need to have both assets offensively.
On bowl gifts and welcome to Atlanta “The Chick-fil-A Peach Bowl staff treated us pretty well last night. We got an Apple TV, a nice Fossil watch, a 300 dollar VISA gift card, a Chick-fil-A Peach Bowl football and a Chick-fil-A gift card.”
On playing in a New Year’s Six Bowl “It’s a blessing. This is the first year of the Playoffs and we’re really privileged to be here. It’s going to be a fun feeling to have all eyes on us with everyone waking up to spend New Year’s Eve watching us ball.”
A lot to soak in but one thing is certain is that the Rebels are ready to moving on up and have proven this season that they just don’t win parties anymore. It is great to see that the Rebels are always continuing to stay hungry and find a way no matter what these days. This is something the Rebels have continued to battle with but seem to slowly be growing into what it takes to be a top contender and it’s not just about the trophies and accolades.
For all the daily dish here in Atlanta make sure to check us out at hottytoddy.com safe travels and see y’all in Atlanta. Are you ready? 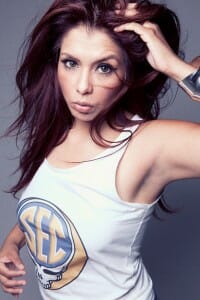 Lee Ann Herring-Olvedo is a HottyToddy.com contributor, veteran SEC sports journalist and Brown University graduate. She loves good cigars, good games and a smooth glass of bourbon — not necessarily in that order and can be reached atmisskentuckyus2011@gmail.com.