Sometimes, it’s the tragedies that bring out the ability to see the beauty in something else.

When Alex Beene lost his mother suddenly last March, he turned his grief into art, writing a children’s book in honor of his and all the Southern mothers and the amazing lessons they leave behind with their sons and daughters. “Lessons from a Southern Mother” was published last October, just a few months after Deidra Hilliard Beene passed away, and it now brings joy to many with Southern ties while giving Alex a platform to share the beliefs of his upbringing.

“When you lose a parent who is one of — if not — most prominent figure in your life, you constantly look for ways that will truly commemorate their legacy,” Alex said. “I think this book does that.”

Alex, an Ole Miss alum with his bachelor’s and master’s degrees from the Ole Miss journalism programs, wanted to find a way to honor his mother, who inspired him as a young child to be a positive spirit in the world.

“I will never forget her picking me up from school one day, and I had won some academic award,” Alex said. “While at a red light, she turned to me and said, ‘Alex, I just have a feeling you are the one.’ My God, what a powerful, wonderful, soul-inspiring thing to say to a child.

“So much of us think of ‘the one’ in a romantic sense as a phrase we’d say to another human being who ‘completes’ us. The day, the phrase changed meanings for me — the one meant ‘the one who’s gonna make the world a better place.’ For that, I’m always grateful to her.”

Deidra had a passion for reading and education and spent much of her adult life devoted to working with high school and college students “to encourage their them to leverage their talents to make the world a better place,” Alex said. She also proudly touted her Southern heritage, even when her son was not so keen on the South as a teenager.

“The small towns, rural mentality and customs seemed so unsophisticated compared to other places I had visited or viewed from afar,” Alex said. “But as I grew older and more maturity came to me, I developed a love with the South and its heritage. In creating this book, I thought, ‘Wouldn’t be great if we could share images and ideas with children that make them have a sense of pride in the South at a younger age?'”

Since attending Ole Miss, Alex has come to love and appreciate his Southern heritage, handed down from his mother, and poured that love into a beautiful book to teach Southern children not only to love each other, but to love themselves.

“There a plenty of people like myself who see the positive aspects of the South,” Alex said. “We’ve met some unbelievably kind souls, studied the stronger aspects of our history and seen great acts of good will in the face of adversity. It’s very relatable to folks in our region with a sense of pride.” 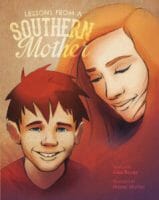 “Lessons from a Southern Mother” is available at 60 retailers in 170 countries, including Amazon.com. For more information on the book and future book signings, visit the website and follow the Facebook page.