Ole Miss Will Have Former Rebel in Super Bowl XLIX

As the National Football League’s conference championships approach on Sunday, Ole Miss will be represented on both teams in the AFC Championship.

With the Indianapolis Colts’ Donte Moncrief squaring off against the New England Patriots and Brandon Bolden, the Rebels are assured to have a former player in this year’s Super Bowl XLIX.

Both Moncrief and Bolden started for their team in the divisional round of the playoffs.

Moncrief has grabbed five passes for 86 yards and a touchdown through the first two rounds of the playoffs. Bolden carried the ball three times and caught an 11-yard pass in the Patriots’ win coming off a first-round bye. 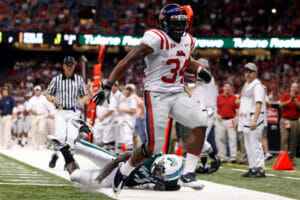 Seven former Rebels on five different teams made the playoffs this season. Arizona Cardinals Bobby Massie and Bradley Sowell fell in the wild card round to the Carolina Panthers. Jermey Parnell and the Dallas Cowboys edged out Cassius Vaughn and Ashlee Palmer of the Detroit Lions, before falling to the Green Bay Packers in the NFC Divisional Round.

The former Rebels have garnered six starts to this point in the playoffs.

In its history, Ole Miss has had 22 former players on teams that reached the Super Bowl, with a total of 27 appearances. New York Giants quarterback Eli Manning was MVP of Super Bowls XLII and XLVI.