Once known for romping up and down the sidelines at Vaught-Hemingway Stadium, running back Brandon Bolden will find himself in an unfamiliar situation on Sunday, the Super Bowl. 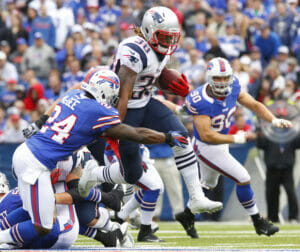 Now in his third NFL season, all with the New England Patriots, Bolden will play in his first Super Bowl following the Patriots’ 45-7 win over the Indianapolis Colts Jan. 17. While this may be his first go-round in the sport’s penultimate game, it is not the first for his family. Holden’s grandfather, Frank Pitts, played wide receiver for the Kansas City Chiefs in two Super Bowls: a loss to the Green Bay Packers in Super Bowl I, and a victory over the Minnesota Vikings in Super Bowl IV.

Bolden was a three-star recruit coming out of Scotlandville Magnet High School in Baton Rouge, Louisiana. Despite not being very heavily recruited, the running back shined right away during his time in Oxford. In his four-year career, he ran for 100 or more yards in eight games: including 101 against Texas Tech in the Cotton Bowl his freshman year, and a career-high 228 yards against Fresno State in 2010. He was a big part of two Cotton Bowl-winning teams, and finished with 33 touchdowns and 3,681 all-purpose yards.

Despite a productive college career, Bolden was not selected in the 2012 NFL Draft. The 5’11, 220-lb. back wound up signing a free agent deal with the Patriots. In Week 4 of his rookie season, Bolden ran for 137 yards and a touchdown against the Buffalo Bills, solidifying his role as a key member of the Pats backfield. In his three years in Foxboro, he has amassed 634 yards and six touchdowns on the ground along with 171 receiving yards.

Ole Miss alumni have won 15 Super Bowl rings as players, including two MVPs as players, both by New York Giants quarterback Eli Manning. Bolden will look to become the most recent Super Bowl Champion Rebel since offensive tackle Michael Oher was apart of the Baltimore Ravens team that defeated Patrick Willis and the San Francisco 49ers in 2013.