Why This Deaf Mississippian Cheers For Seahawks 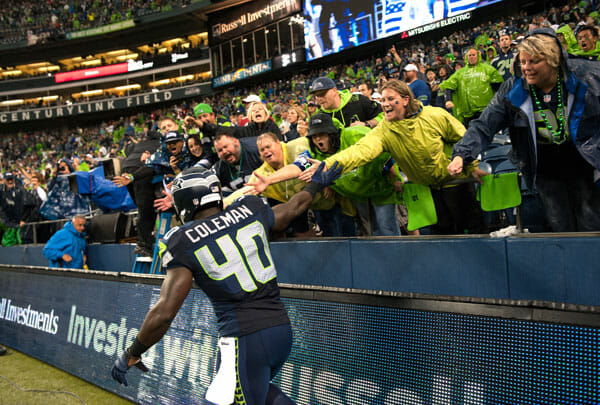 A year ago the Super Bowl was playing on television, a little muted. The living room was quiet as people shook their heads. Every now and then a hissed “yes!” punctuated the air. I was the only person cheering for the Seattle Seahawks in a room of people who sided with the Denver Broncos. I leaned over and said to my disgruntled fiancé, “The best defense always wins.”

I have never visited Seattle. The closest I ever came to Washington was in early 2000s when my father took my sister and I to Disney World in northern California. Even then, I didn’t know much about the Seahawks. I’m still learning more about the team save one player: Derrick Coleman, Jr.

He’s the fullback and running back for the Seahawks. He’s the first deaf offensive player in NFL. And he has a Super Bowl ring. I didn’t know about him until the Duracell commercial came out last January.

I nearly cried from relief. He is a year older, 123 pounds heavier and living across the nation but still the commercial spoke to me. We were bullied. We were pushed away. But we kept trying.

I Googled him — his honesty opened a Pandora’s Box of emotions. For most of my life, I’ve diminished my growing pains because it’s easier to joke about it. No one wanted to hear about my insecurities because it scared or depressed them. When I vented to people in the past, snappy, defensive questions took place of quiet compassion. “Why does it matter? Who cares?” I learned to hide my frustration. It’s hard to grow up different, and I was afraid to.

It’s a relief for me to see someone else who gets it and also shares with the public all the struggles we, the deaf or hard of hearing, have faced. No matter where we grew up or what we did with our lives, we all had the quiet stress of frantically lip-reading a person who mumbles, the cold dread of our batteries dying in middle of an important conversation and the learned endurance of listening to someone who talks to us as if we weren’t capable of conversation. I snickered when Coleman said he turns off his hearing aids whenever he encountered a rude person — a hidden blessing in our hearing disabilities.

Coleman isn’t the first deaf player in NFL history. Bonnie Sloan, defensive tackle for 1973 St. Louis Cardinals, was the first and he thought it fortunate to not hear his coaches curse. The second was Kenny Walker, defensive end for Denver Broncos who used to bring an interpreter to team meetings. But Coleman went where they didn’t go: offensive line where teammates garble words through mouthpieces and break-neck racing to line of scrimmage to snap the ball.

He has an understanding with quarterback Russell Wilson that he make eye contact with him during play calls. Whenever Wilson has to shout under center he’s expected to turn around and mouth it to Coleman. If he forgets, Coleman will grab his face mask and say, “What?”

He did this when he played as tailback for UCLA Bruins. “Well, I need to know the play,” Coleman said to Tom Friend of ESPN. “So there was one time in college where he was tellin’ everybody his play, and he went back to hike it, and he didn’t tell me. So I just ran up there and I grabbed him by [the mask] and just pulled him around, like, ‘Hey, what’s the play!'”

Coleman said in an interview to Hearing Like Me that as a child, he didn’t talk much to anyone else outside of his immediate family. Now he’s talkative and unafraid of his disability. He doesn’t hide it — he lives it. And football made his disability an advantage.

“Football gave him self-esteem he never would have had,” Derrick Sr. said to Tom Friend at ESPN. “After he got to prove himself, he was no longer picked last — he was picked first. Because now everybody knows this kid. ‘Oh, that kid? Yeah, Derrick with the hearing aids. Yeah, he’s a great player.’ So, he found his niche in life early on.”

When he first played football for Pop Warner in middle school his hearing aids fell off. His mother, May Evans, fashioned a cap out of her pantyhose to secure his hearing aids under the helmet. Regardless he used his eyes to listen. His high school coaches at Troy in Fullerton, California assured college coaches during recruitment that out Coleman “paid attention five times more than the average player.” They said he was so tuned in that in one high school game he eyeballed an opposing coach yelling, “Sweep!” to his quarterback from 50 yards away. He told his defensive coordinator and the Troy defense stuffed the sweep on fourth-and-1.

Despite not being drafted to NFL in 2011, an event he turned up his hearing aids for to hear everything, he didn’t give up. After a stint with Minnesota Vikings on the 2012 practice squad and helping his alma mater high school, he got a call from Pete Carroll, who met him during college recruiting when he was then head coach of USC Trojans. Carroll was the Seahawks head coach and he wanted to sign him to his 2012 practice squad with the promise of considering him for the team on 2013 practice squad.

On the squad Coleman befriended Russell Wilson. He needed the quarterback to help him make the team and he needed Wilson to convey the play calls to him clearly. He sat next to Wilson in team meetings and in the locker room. He told Wilson his story.

Coleman is an inspiration to me. Growing up I did my best to hide my disability, always making sure my curly hair covered my cochlear implants. Coleman never had a chance to hide his hearing aids from the school bullies who called him “Four Ears” and ganged up on him to knock his hearing aids into the dirt. But he turned his frustration into powerful tackles and now sports a Super Bowl ring with an opportunity for another Super Bowl ring over the New England Patriots tomorrow.

And I’ll be watching from across the nation in Oxford, Mississippi. I watch NFL football sporadically except for New Orleans Saints. Now I cheer for the Seahawks, a team with a fanbase I have just one thing in common: Derrick Coleman is our hero.

Callie Daniels is a staff reporter for HottyToddy.com. She can be emailed at callie.daniels@hottytoddy.com.