Oxford Police Department Captain Libby Lytle is March’s First Responder of the Month in recognition of her dedication to the department and the city.

She hails from Taylorville, Illinois, but has called Mississippi her home for 21 years now. When she was younger she did not picture being a police officer right away.

“I never realized I was going to be a cop,” Captain Lytle said. “I just fell into it.”

She moved to Florida for college and ended up working for Budget Rent-a-Car at the Ft. Lauderdale airport. She worked in security and would report cars stolen that were not returned. The Broward County Sheriff’s Department would take her reports and strongly encourage her to put in with them. The deputies would eventually recruit her to work for the Broward County Sheriff’s Department in Florida.

“I blew them off several times before joining,” said Captain Lytle. “I never would’ve joined if it weren’t for their encouragement.”

She then moved to Natchez in 1993 where she began working as a police officer for the Natchez police department. She noticed a difference between Mississippi and Florida: “There weren’t as many female police officers.” This observation stayed with her, but she was not deterred from her career path.

“I can say this: I never let a person get away from me,” said Captain Lytle. “I always tackled them and say, ‘You’ve been caught by a girl!'” She chuckled.

She was not the first female officer hired by OPD but she was the first female to rise through the ranks. In a year she became a sergeant who oversaw shift paperwork, and then was promoted to the rank of Lieutenant a few years later. In 2006 she became a patrol captain, responsible for shift operations and supervision. She was recently moved into an administrative role again to supervise training, accreditation, reserve officers, internships and various other employees under the administrative captain.

“There are only 15 law enforcement departments in Mississippi who can accredit,” said Captain Lytle. “Accreditation means that we as police officers hold ourselves to higher standard by procedures and responsibilities.”

She oversees the re-writing of the department’s policy and procedures as part of accreditation. There are 188 standards for national accreditation for police so Captain Lytle faces a considerable workload in writing new policies for Oxford police to meet both the state and national accreditation standards. She persists because to her it is important for Oxford police to do the most effective and efficient job in the most professional manner, hand in hand with the community.

“I have been told that I should have been doing something else because I was a woman,” said Captain Lytle. “But this is what I want to do: I want to help and protect the people.” 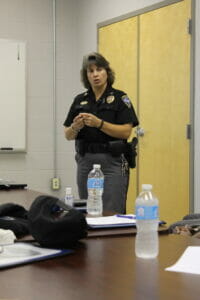 In 2007 she attended her first IAWP conference in Dover, Colorado.

“It was so empowering,” said Captain Lytle. “I met incredible officers from Africa to China to New Zealand. It was uplifting.”

A couple years after meeting these amazing women at the conference, she became a Region 5 coordinator overseeing the Southern region of IAWP. She founded and remains the president of Mississippi Women’s Law Enforcement Association (MSWLEA). She oversees training for the MSWLEA membership in Mississippi and open it up to women in Alabama, Arkansas, Florida and Louisiana. She wants to pay forward the gratitude she felt at the IAWP conferences she attended.

“I want to be an inspiration to other women in law enforcement,” said Captain Lytle.

Her work was not limited to the police department. Captain Lytle teaches a criminal justice class at Northwest Community College every spring and fall semester.

She is also a domestic violence and ethics instructor. She has helped families escape domestic abuse and their gratitude has kept her dedicated to her job.

“The best payback I get is when I am able to make a positive impact on lives,” said Captain Lytle. “I remember a domestic abuse case a while back where a mother and daughter suffered abuse for several years from their husband/father. I was able to get them to a shelter. Some time later I saw this woman and she told me how appreciative she was of my help and that her and her daughter were away from him [their abuser] doing great in making a new life.”

Her 24-year-long career began as a chance encounter with the Broward County Sheriff’s Department in Florida, but she embraced her job with a passion and admirable work ethic.