A mother of three, active and very health-conscious, Lori Newcomb really had no warning signs. Not at first. In fact, by the time she knew something was drastically wrong, time had passed and there was no rewinding of the clock. There was only moving forward into some of the darkest hours of her life. But the aged proverb proved to be very true: the darkest hour is just before the dawn. And while her journey hasn’t been easy, by any means, her destination; her mission now is clear: helping other women.

Early warning signs of ovarian cancer are sometimes very easily missed and often thought to be just normal aches and pains that we all have. That’s the reason behind Newk’s Cares and Lori’s calling.

In February 2013, Lori Newcomb was diagnosed with ovarian cancer and her journey began.

The Newcomb’s are co-founders of Newk’s Cares, which is the philanthropic arm of Newk’s Eateries, where Chris is co-founder and CEO.

“The reason Chris and I decided to create Newk’s Cares was because we discovered that there were really no symptoms, no early detection tests for me to find out whether or not I had ovarian cancer,” Newcomb said. “With breast cancer, there are mammograms and with cervical cancer, a woman can have a pap smear, but this is literally one of those diseases that you don’t know you have until sometimes it’s too late.”

Newcomb said that with Newk’s Cares, the mission is to bring awareness to the symptoms of ovarian cancer and to encourage women to visit their doctors on a regular basis, especially if they detect any change or pain within their bodies, to not just chalk it up to everyday aches when it could be something much more.

“We definitely want to raise money for ovarian cancer research,” Newcomb said, “but at the same time, my true passion right now is that I want women to know the symptoms; I want them to be aware of the symptoms, so if they are having any of the warning signs, they will go to the doctor and take care of their bodies.”

Newcomb said when she first realized something was very wrong, her main symptoms were irritable bowel syndrome, which was a tricky one, because at first, she just thought she was having normal bathroom issues, but she said it consistently got worse and never went away. She was also throwing up two and three times per week for over a month right before her diagnosis.

“I had lower back pain that was excruciating,” she said. “It wasn’t like a pulled muscle and it was chronic; it never went away. Another symptom was a lot of abdominal pressure and I would eat maybe two bites of something and then I’d feel very full, but was still hungry. I found out that this particular symptom is a very strong and consistent sign of ovarian cancer. The lack of energy was also a very big issue with me and so totally out of character. I have always been a person who is very energetic and went everywhere all the time.”

Newcomb said she would come home and literally fall asleep, feeling so fatigued that she had absolutely no choice but to take a nap. She knew that she didn’t want to live like that and had tried all the homeopathic remedies before seeing her doctor.

“Not in a million years did I think that I was going to be diagnosed with cancer,” Newcomb said. “I’ve always been healthy; I’ve always been someone who ate right, exercised; I was constantly in motion. When I started having to take naps in the afternoon and after an entire month of that, I still didn’t feel good; I knew something was wrong. That’s when I started self-diagnosing. I’d go on WebMD and say to myself: OK, maybe I have this issue or that issue and I’d try to pinpoint it; by the time I did see my gynecologist for my yearly check-up, I was afraid that I did have cancer. At that point, I had seen three previous doctors and no one was helping me; so when I went in for that yearly check-up, I told my doctor that I was scared to hear what he was going to tell me.”

Ovarian cancer cannot be diagnosed through a pap smear. Instead, bloodwork has to be done and the patient has to have either an MRI or a CAT scan. Newcomb’s doctor immediately ordered a CAT scan and that’s when three tumors were discovered, total weight for all three was 10 pounds.

“One tumor alone weighed 6 pounds,” she said. “In comparison, my middle child weighed 4lbs.-11oz. when she was born. “That’s one of the problems with early detection; those tests are not routine procedures. That’s why it’s so important to know the symptoms. And why we have symptom cards in Newk’s Eateries all across the south, because so many women don’t know the symptoms and sometimes just dismiss them.”

Newcomb was diagnosed with Stage IIIC ovarian cancer in February 2013 and is determined to educate women about ovarian cancer and promote research for a cure.

“It’s been a little over two years and it’s been quite a journey,” she said. “I’ve gone from being this cancer patient who was scared and frightened, with hardly any information about this disease or my own future with it, to someone who finally knows what I have and how important it is to bring awareness about the disease to women everywhere. I’ve had to educate myself. My oncologist, Dr. Paul Seago, gave me the tools I needed for that and to find some comfort in living with cancer.”

She had a year and three months of chemotherapy and went in every three to four weeks for her treatments.

“I lost all my hair, had no eyebrows or eyelashes,” Newcomb said. “To be honest with you; I learned a lot about myself at that time. And without my husband and my family; I wouldn’t have made it. They were the ones who were strong and brave and kept me going. During that year of chemo, I found myself asking the question I’m sure everyone with cancer asks: why did this happen to me? My husband was great and we talked about everything, the why’s and the what if’s, everything. One day I looked at him and said, let’s make something good come out of all this. He said fine, what do you want to do?

“I told him that I had found this really cool fundraiser and it was all about raising money on spin bikes and I used to spin every day before I became sick. I love to spin. And I told him that I wanted to bring this spinning fundraiser to Jackson and asked him if we could do it through Newk’s and he jumped on the idea and said let’s do it. And we began to put things together. 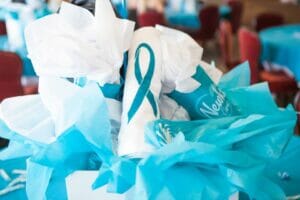 “September is ovarian cancer awareness month and he suggested for that month to change the Newk’s cups to teal instead of black, teal being the color for ovarian cancer. So, really, where Newk’s Cares came from was Chris and I sitting in our home, walking together through the pain of my cancer, and knowing that I wanted to be around much longer than five years, which is the average lifespan for someone diagnosed with the disease. The idea came from our hopelessness when it came to controlling the cancer to what can we do to contribute positively to my outcome and the outcome of others.”

Chris Newcomb is in awe of his wife’s strength and determination to get the word out about ovarian cancer. He has nothing but praise for her efforts and her amazingly positive nature.

“Whenever you hear the C-word, you’re always immediately scared,” Chris Newcomb said. “And not knowing the full extent about ovarian cancer, you’re even more scared. It was a scary time, especially with my wife being so young and athletic. Lori is one of the strongest and most determined women that I know. Newk’s Cares came about because of her sincere desire to help other women going through ovarian cancer and to bring awareness to the warning signs and to educate women with as much information as possible. She’s an amazing lady.”

Her father-in-law retired Oxford dentist, Dr. Don Newcomb, believes in his daughter-in-law’s efforts and supports her and Newk’s Cares wholeheartedly.

“Lori has been a tremendous inspiration to us, “Don Newcomb said. “To see how she has attacked this cancer has been amazing. We love her and support her in every way.”

Through Newk’s Cares, Newcomb and her husband embraced Newk’s Cares Ready, Set, Ride, a spinning fundraiser that was held in September 2014 for the first time, where they raised nearly $120,000 for research and they’re already prepping for the second event in September 2015. They hope to grow their branch of the Ready, Set, Ride fundraiser brand into a larger event that spans the entire southeast, wherever their 77 Newk’s franchises are located.

Newcomb said one of the blessings that she’s had through this entire journey was the way the entire community of ovarian cancer patients all across the southeast, through Newk’s Cares, reached out to her and were so happy that someone was finally putting some information about the disease out there for women everywhere.

“It’s been such a support system,” she said, “and it keeps me energized and moving forward and looking toward the future. With Newk’s Cares, we’ve created something that’s helping people and educates them about ovarian cancer; now we just have to make it bigger and better each and every year. We want to help women get diagnosed earlier, at Stage I, versus where I am, which is Stage III. Being able to catch ovarian cancer at Stage I is a huge turning point for someone when facing this disease. And what is so awesome about all of this is we have the support of everyone in our Newk’s family. It blew our minds how everyone jumped on board for this effort, from the franchisees to the hourly partners, just everyone. Newk’s is our family and we love them.”

For more information on Newk’s Cares, go to Newk’s website.