Ole Miss athletes not only compete against the best of the best in the Southeastern Conference, but they also have the opportunity to receive a world-class education from Mississippi’s flagship university. 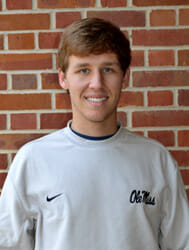 A sophomore track and cross country runner from Columbia, Mississippi, Watts has excelled as a member of the Sally McDonnell Barksdale Honors College. He is a public policy leadership major in the Trent Lott Leadership Institute.

This fall, Watts will take a break from his athletic duties at Ole Miss and move to a different Oxford, an ocean away. He will attend St. Catherine’s College at Oxford University in England and study in its PPE (Politics, Philosophy and Economics) program for the 2015-16 academic year.

“I was thrilled when I got the news and am honored by this opportunity,” Watts said. “Oxford University has one of the finest academic traditions in the world and I look forward to immersing myself in its rich culture.”

In fact, the city of Oxford, Mississippi, was named after England’s prestigious university town in hopes of attracting the state’s first public university. Incorporated in 1837, that goal became a reality when the Mississippi legislature voted in 1841 to establish the University of Mississippi in Oxford. The doors were opened in 1848, 167 years ago.

The original Oxford University is considerably older, with documented teaching as early as 1096.

Watts does not take this opportunity lightly.

“The leaders of this campus have voiced tremendous support for me,” he said. “Whether it be Dean Sullivan-Gonzalez at the Honors College, Coach O’Neal or Coach Vanhoy, it has been encouraging to have such positive support. I must also thank our Artist-in-Residence, Bruce Levingston, who cares deeply about the students of this university and was kind enough to write a supportive recommendation on my behalf.

“Derek Cowherd, Jennifer Saxon and the rest of the FedEx staff have been very helpful throughout this process, which speaks to the commitment they have to the lives of student-athletes outside of the Ole Miss classroom.”

Often called the “Governor” by his Ole Miss peers because of his intellect, engaging personality, and propensity to shake hands and befriend strangers, Watts is destined to be in the public eye. Although he’s from a small town (Columbia’s population is 6,582 according to 2010 U.S. census data), Watts is no stranger to international travel. His travels include a trip to Ireland and a rather unique voyage to South Africa last summer in which he backpacked alone across the country for a month with little money and clothing, relying on locals and his own ingenuity to experience the culture more like a local than a tourist.

A big fan of his home state and university, Watts will carry with him all of his various experiences when he moves to England.

“I love the Ole Miss family,” he said. “It is a community and heritage that I am proud of and look forward to representing at the ‘other Oxford.’”

Facebook
Twitter
Pinterest
Previous articleIHL Board Released Statement Concerning Contract Negotiations With Chancellor Dan Jones
Next articleDeeper South: Entrepreneurs, Is There No Limit to the Creativity of the Delta?