The red carpet was rolled out at the Gertrude C. Ford Center for Rebel athletes and athletic staff on Monday night at the Fifth Annual Rebels’ Choice Awards hosted by ESPN sideline reporter, Holly Rowe.

This year’s awards ceremony, dedicated to Chancellor Dan Jones, was filled with photos, nice suits and pretty dresses as soon as the athletes set foot on the carpet. Each year, a male and female athlete is presented with an award commending them for their spirit and heart for the game, as well as the tremendous hard work put in on and off the field all year round. A total of 19 awards were given out where the Ole Miss Student-Athlete Advisory Committee decided upon 16 of the honors, leaving three to be selected by the fans.

Not to forget about Ole Miss’ valued coaching staff, a Coach of the Year award is also handed out for a head coach who has had a significant impact on their team’s success and has aided in the teams great improvement over the last season.

Among the men’s head coaches, Coach of the Year was given to baseball’s Mike Bianco. In the 2014 baseball season, Bianco led the team to a hot spot in the College World Series for the first time since 1977. His team was also awarded Men’s Team of the Year.

Volleyball’s head coach Steven McRoberts was given Coach of the Year among the women’s head coaches, while Women’s Team of the Year was awarded to the volleyball team. The lady rebel’s finished their last season with a 22-10 record, which is the most wins in program history since 2007.

When it came to the Most Valuable Rebel award, women’s basketball Precious Person had confidence that her teammate Tia Faleru would go home with the honor.

“She’s been here for four years and her hunger to win has never stopped. She’s been all leading SEC rebounder as well as leading scorer and her value to the team has shined through no matter what changes our program has gone through, which has been a lot,” Person said. “I don’t think there is anyone more deserving of this award and I would love to see her leave with a bang.”

As if student athletes are not busy enough juggling their sporting events, teammates, practices and academics, a men and women’s team is also presented with a Community Outreach award.

This award is given to a team that has been involved in the community above and beyond what is required. The honor was given to the football team and women’s basketball team for their outstanding volunteer work within Oxford and around campus.

Aside from community service, the athletes are also commended on their academic achievements, which happened to be better than ever before.

Before announcing the winners of the scholar-athlete award, Rowe applauded the audience for the highest ever student-athlete grade point average landing at a solid 2.96. Football, soccer and men’s basketball earned the highest team GPA’s. Forrest Gamble from men’s golf, Jonathan Redding from men’s track and field and Stani Schiavone from women’s golf were all awarded with Scholar-Athlete of the Year.

This year’s Rebels Choice Awards also took the time to remember a special football player who un-expectedly passed away in 2010, Bennie Abram. This was the second year in a row that the “Bennie Abram Award” was given to one of football’s walk-on athletes. John Ratliff proudly accepted this award that was presented by Abram’s mother, both holding tears back at the podium. 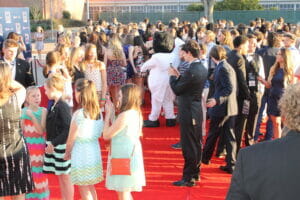 “I’m going to try not to get too emotional. I remember hearing about this athlete and his incident and I can’t even believe that I’m standing here right now,” Ratliff said. “I’m incredibly honored to accept this. Thank you.”

After the athletes were awarded on the basis of the Student-Athlete Advisory Committee in majority of the categories, the fans were able to make their votes count in three major areas: Play of Year, Game of the Year and Fan Favorites.

Play of Year was awarded to football’s Jaylen Walton and his unforgettable 91-yard-touchdown run in the Egg Bowl victory over No. 4 Mississippi State. Women’s basketball Gracie Frizzel and football’s Laquon Treadwell were crowned this year’s Fan Favorites.

Frizzel said that the award was a very humbling honor, as she hopes to become a role model for young girls one day.

“I want to show athletes that you can do well in your sport, while doing well in the classroom. I could not have done it without my teammates and coaches”, she said.

Laquon too, seemed very humbled by his award, as he stood proud next to Rowe injury free and all smiles.
“It’s a blessing to be at this university and to be apart of a night like this,” Treadwell said.

And by the small chance you couldn’t guess which athletic team won Game of the Year, it was football’s historic win over No. 1 Alabama.

Next year’s Rebel’s Choice Awards will come with a brand-new red carpet, host, and set of winners near the end of March 2016. Until then, be sure to go cheer on all of your Rebel athletic teams now and in the seasons to come. Hotty Toddy!

Awards not mentioned are listed below:

Men’s Rookie of the Year: Jalen Miller, track and field

Jana Rosenberg is a HottyToddy.com staff reporter and can be reached at jmrosen1@go.olemiss.edu.